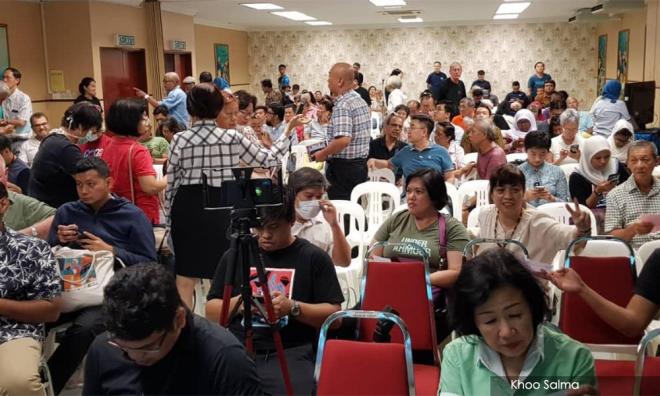 COMMENT | The headline in Malaysiakini titled “Looks like we have to kick out the YBs before they’ll listen” must have hit a raw nerve to elicit a press statement from 10 DAP state assemblypersons (ADUNs) on Feb 16.

Just a minute. Isn’t this what the DAP and other Pakatan Harapan politicians said all the time when they were in opposition? So, why are they all ruffled up when the same is said to them when they are in power?

It is a basic political reality that politicians who don’t listen to people’s concerns eventually get voted out. And thank God that this happened in GE14 in 2018. Are there then two sets of reality? One that applies to them when they are in opposition and another when they are in power?

And lest the cyber troopers misrepresent and mischievously accuse me, my statement is NOT a call, by any shot, to vote the previous corrupt regime back to power. It is a call for them to listen to people’s concerns.

More fundamental than representation, democracy is about public participation - people having the power to participate in making public decisions that affect their lives. This is called participatory, or direct, democracy. While this is more difficult to implement at the federal level (even then national referendums are sometimes held), participatory democracy is most applicable at the local level.

This is what is most lacking in our society - the ability of people to participate in public decisions. Democracy is not about asking people to shut up after every election and for the elected politicians to claim we have given them the “mandate” to make all types of decisions. Politicians should listen to the people, find out their concerns, engage with them, encourage them to participate in making decisions.

The Penang Peduli Rakyat forum was organised by Penang Forum in that spirit – to provide a platform for citizens to articulate their concerns. It was an open platform and anyone could participate. It was not the usual Penang Forum meeting because of the 20 speakers, only five were members of Penang Forum. The vast majority of speakers I have only met the first time.

The 10 ADUNs accused Penang Forum of a “publicity stunt to trap and tarnish the Harapan state government because the invitations were sent out last minute”. Penang Forum held a press conference on Wednesday, Feb 12, to notify members of the public about the event.

On top of that, I made a special effort to write personally to 40 ADUNs and about 10 MPs in Penang to invite them to attend. The email invitation was sent out on Feb 11, four days before the forum, not the night before. It would have been an excellent opportunity for them to listen to a vast spectrum of people.

If they could not attend, they at least could have sent their representatives. But alas, only three replied and all said they could not attend. Satees Muniandy was among those who replied. He can attest to when he received the email. Unfortunately, Deputy Chief Minister II P Ramasamy (above) said he didn’t receive the invitation. I checked my computer. It was sent to this email address [email protected] at 10.35 pm on Feb 11.

The 10 ADUNs accused me of being political because I had spoken twice in Gerakan events – one on the Penang Transport Master Plan and more recently, on local democracy.

In making such statements, the hypocrisy of the DAP politicians is on full display. Have they forgotten they were proud to be associated with civil society and even jumped on our bandwagon to oppose the previous government on issues ranging from development in Penang Hill, to the construction of Penang Outer Ring Road (PORR), to the mammoth Penang Global Convention City (PGCC) and the destruction of heritage buildings? Then they did not accuse us of “hiding behind the veil of civil society”. Or was it because DAP politicians were “hiding behind the veil of civil society”?

How politicians change and forget their promises when they get into power. They do exactly what they said they objected to when they were in opposition. Ponder the statement of Chow Kon Yeow on May 29, 2002, when he was in opposition. “If the findings of the Halcrow report are true, Dr Koh would be irresponsible in pushing the PORR through as this will not be a long-term solution to the traffic congestion on the island.” Today, Chow is the chief minister and is pushing for the Pan Island Link, an extension and expansion of the PORR project.

Finally, the 10 ADUNs claim this state government has done more engagements with the public than any previous governments. A 2017 study on public participation and citizens engagement in Malaysia by a team of MIT researchers found that the type of public engagement is more pseudo-participation than genuine participation. The hundreds of public engagements on the Penang Transport Master Plan (PTMP) by the state are nothing more than top-down public briefings on projects that they have already been decided on.

The questions that we and other scholars have raised regarding the many inconsistencies and factual errors in the PTMP have not been answered or addressed adequately. We do not expect the state government to agree with us “lock, stock and barrel” as Ramasamy suggested. But we do expect proper answers to the questions raised. Otherwise, there is no genuine engagement.

As an example, back in 2015, we already questioned the validity of the SRS’s claim that the LRT would have 42 million ridership in its initial years of operations. We estimated that eight million ridership may be more realistic. With the forecasted annual operating and maintenance expenditure of RM170 million, the state would be staring at an annual deficit of RM140 million. This is not something that the state can take lightly, given its annual revenue hovered around RM500-RM600 million over the last few years.

Instead of engaging with us meaningfully to address this concern, the state government steadfastly kept silent, ignored us and persisted to push for the LRT. Five years later, in November 2019, they suddenly appeared to accept our estimates, and reduced the initial ridership forecast to seven million. However, they also scaled down its annual operating expenses from RM170 million to RM32 million in order to show a smaller deficit.

I questioned this sleight-of-hand move in a meeting with the chief minister and the SRS – that it is not possible to cut down the operating expenditure to such a low level unless the operator plans to drastically reduce the frequency and number of trips, to which the answer was ‘no’. Instead of questioning and reviewing SRS’s assertions, the state government accepts “lock, stock and barrel” the claims of the SRS even when they do not make sense.

Until the state government shows it is willing to genuinely engage with the public, civil society will continue to play its role to press for more transparency, accountability and public participation. The people demand participatory democracy.

If the state government is serious about local democracy, it can start that process by holding more joint public forums with civil society, not top-down briefings, something which Penang Forum has consistently asked for.