A QUESTION OF BUSINESS | No, that figure is not preposterous as we will show. Our estimate (see table) is that if the government parcels out the land and sells it, the revenue could amount to as much RM105 billion. Deduct the costs as enumerated, and you have a potential profit of as high as RM96 billion!

Even if there are other contingency costs of RM6 billion, we can still make RM90 billion. We explain below how we arrived at the RM105 billion figure for land sales and our various overall cost assumptions.

Of course, you won’t get that day after tomorrow such as you get RM7.41 billion in cash if you sold a 60 percent stake in Bandar Malaysia, valuing the entire land at RM12.35 billion as originally planned. But if you waited even 10 years before completing all sales, it would still be very worth it. 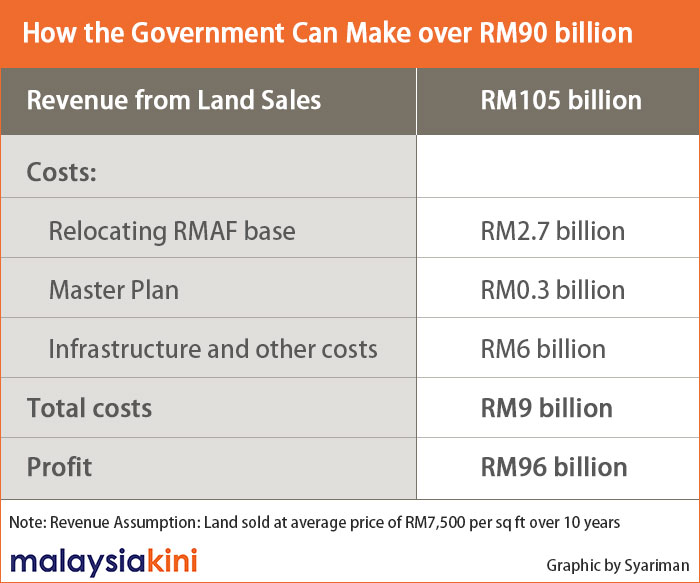 This sale of the 426-acre Bandar Malaysia to the 60:40 consortium owned by Lim Kang Hoo’s Iskandar Waterfront Holdings and the China Railway Group was aborted. This is owned by TRX City whose ownership has been transferred from 1MDB to the Minister of Finance Inc. Since 1MDB is itself wholly owned by MOF Inc, it is merely a right-to-left-hand transfer.

So, let us tell the government how it should have gone about developing the land and realising maximum value for it while retaining all elements of planning and control.

First, the land should have been transferred to a government-owned corporation which has expertise in doing such plans, for example, Khazanah Nasional Bhd, instead of a dubious company like 1MDB whose intentions were not properly stated and which engaged in numerous nefarious and shady practices.

For this, an international open tender should be invited, and one picked based on initial proposals. Since this is a master plan, it would be based on fixed costs - the cost of services provided. Thus, we think RM300 million will be more than enough for that.

The master plan basically divides the land up for residential purposes (probably high-end condominiums), offices and commercial property such as shopping complexes. As plot ratios (proportion of land to developed area) will tend to be high, the land price per square feet can be astronomical, especially for such a prime development in a prime area.

Once the master plan is finalised, the other costs will be for providing infrastructure and others, which we generously but arbitrarily estimate at RM6 billion. It can’t be much higher because 426 acres is actually less than one square mile (640 acres). The cost of relocation of the RMAF air base has been reported at RM2.7 billion. And that’s as far as it goes in terms of major costs - a total of RM9 billion (RM300 million + RM6 billion + RM2.7 billion).

Now comes the difficult part - what price do we put on land sales? We have to remember that this will be prime land and we are assuming it will be sold over 10 years. It is most likely to include super-high-end living, office spaces and shops...