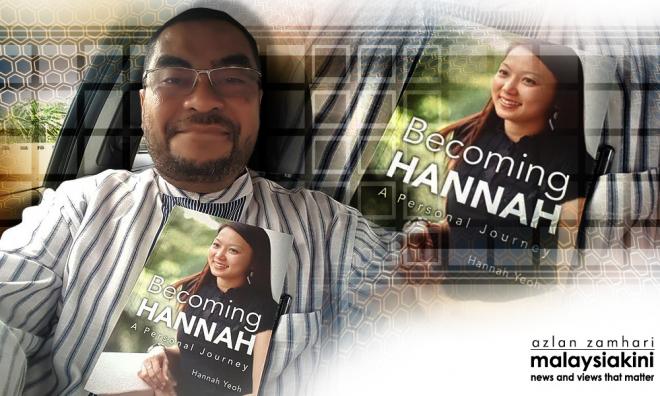 Hmmm... who should we elect?

The ones who would not appreciate women but appropriate the way they should dress?

The ones who keep using religion to polarise voters?

I have always loved our dear departed Nik Aziz Nik mat and everything he stood for - humility, pragmatism, moderation and most of all, his love and compassion for his fellow Malaysians.

The PAS Nik Aziz stood for, is dead.

If only, he were still around...

On second thoughts, better not. He would be scandalised by what’s going on in his beloved party now and how he would feel betrayed by those closest to him.

The beautiful thing about life is, “unless a grain of wheat falls into the earth and dies, it remains alone; but if it dies, it bears much fruit”.

Now we have others who would fight for all Nik Aziz stood for.

We are blessed to have Mujahid Yusof Rawa.

Thank you, dear sir, for being true.

Thank you, for affirming that there was no element of proselytisation in Hannah Yeoh’s book, ‘Becoming Hannah: A Personal Journey’.

Thank you, too, for saying that after reading such a book, you will not just remain a devout Muslim but become a better one!

I, too, have in my study, the Qur'an, the holy book for Muslims and ‘Aku Ingin Kembara Lagi’ by Professor Madya Dr Mohd Asri Zainul Abidin, among other literature.

And unlike some tongue-twisting lecturer of one of our ivory towers, I have not been influenced towards Islam, the way he claimed to have, towards Christianity after reading Hannah’s book.

Like Mujahid, I would remain a devout Christian and even become a better one, after being enlightened by my reading.

How hypocritical can one get?

We don’t need to second-guess where all this lunacy is coming from, right?

Come 2020, we'll be a nation of idiots, if we subscribe to such stupidity!

In Hannah and her scribe, wouldn’t we be gifted with leaders who have Wisdom, Understanding, Counsel, Fortitude, Knowledge, Piety and Fear of God?

What’s wrong with that, if they can bear fruits that teach and bring to the rakyat, Love, Joy, Peace, Patience, Kindness, Goodness, Forbearance, Faithfulness, Gentleness and Self-Control?

Do we vote for the likes of Hannah and Mujahid or for those who plunder the nation to enrich themselves?

Pastors and activists have gone missing in recent months.

Now, an idiot and his ilk are baying for Hannah’s blood.

When will this persecution stop?

Did Tertullian not say,

“The blood of the martyr is the seed of the church?”

Guess being entrenched in an ivory tower doesn’t mean one will be enlightened, does it?

What more, flaunting his credentials?

Thought the taller the bamboo grows, the lower it bends?

Does this dope not know that just because one Man was crucified and hung on the Cross, a third of mankind now profess His beliefs?

No wonder, Malaysia languishes in a dismal position at 52 out of 72 countries in the 2015 rankings conducted by the OECD think-tank.

Perhaps, we have dopes hibernating in our ivory towers but, who moonlight for plunderers.

Truly religious people do not deny their faith, wherever they are.

That doesn’t mean they will shove their beliefs down the throats of others.

Hannah, Mujahid and their scribes are our hope for a better Malaysia.

Shouldn’t we be grateful for these gifts from God, both true to their beliefs, who can inspire the nation, especially our young, to bear much fruit?

Those who would betray our beloved motherland, wouldn’t want Malaysians to come into their own.

Such traitors wouldn’t want a beautiful nation, made up of a myriad of colours, cultures and beliefs, yet, with one heart, beat for Malaysia.

We know who are the patriots and who are not, don’t we?

Thank you and God bless.