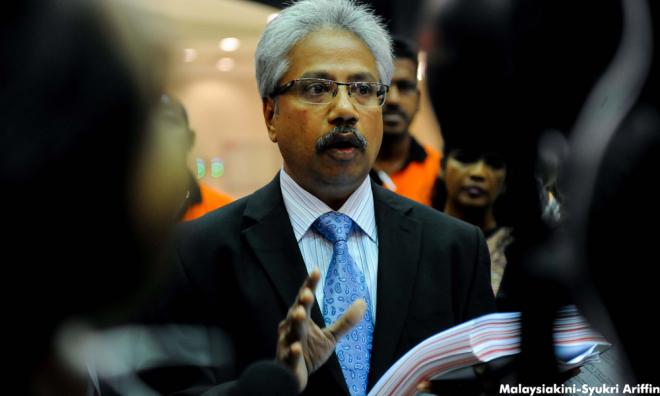 Waytha must apologise for going to BN

I refer to P Waythamoorthy's attempt to join Pakatan Harapan and to his claims that he represents Hindraf.

Malaysian Indians have not forgotten Waythamoorthy's last minute stab in the back, against the interests of the Indian poor, by joining the oppressor BN.

Until today, Waythamoorthy has not apologised for this betrayal or even acknowledged that what he did was wrong.

He and his Hindraf splinter group have not had the courage to admit they made a terrible mistake; instead, they still claim that they had no choice but to join BN.

No choice but to join the oppressor? Waythamoorthy and his supporters must know that there is always a choice, and they made the wrong choice.

Malaysian Indians suffered, were beaten, tear gassed, jailed in the struggle against BN only to see Waythamoorthy campaign for Najib and the BN in 13th General Election and become deputy minister.

Now, Waythamoorthy and his splinter Hindraf group claim to command the support of the Indian masses, when in fact the Indians have long since rejected him.

The fact is that Harapan's predecessor Pakatan Rakyat retained the Indian vote in 13th General Election, despite Waythamoorthy's all out campaigning for BN.

This proves that Indians have rejected Waythamoorthy wholesale. He has no support amongst Indians.

I am also shocked that Waythamoorthy is threatening to sue Harapan MP Charles Santiago simply because he criticised Waythamoorthy.

Although looking to join Harapan, Waythamoorthy has shown his true colours by announcing legal action upon Charles.

He shows also his intolerance and his fear of the valid criticism that he betrayed Indians by joining BN.

Finally, it is clear that Waythamoorthy has no authority to claim that he represents Hindraf.

There are two other bigger Hindraf groups led by Uthayakumar and N Ganesan who also claim to be the true Hindraf. Which is the real Hindraf?

Waytha does not own the Hindraf movement, nor does he represent it.

He lost that right the day he abandoned the struggle of the Indian poor and joined the discriminatory and communal politics of BN.