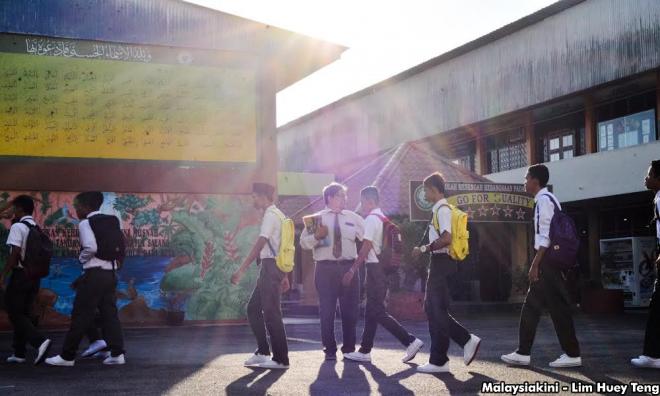 Why we should support Education Ministry ending streaming in schools

LETTER | When Education Minister Maszlee Malik announced that he wished to end the streaming policy in secondary schools, there were some brickbats over the idea. Now, perhaps it was because some Malaysians have something against his earlier ideas, or perhaps they are against this policy individually - I personally have no idea.

Some have accused him of using it to abolish the science stream. Some have gone to say it’s a racist policy to put Malays in a good light.

Honestly, I am utterly confounded by these allegations. Perhaps those detractors would like to jot their reasoning down to the press so we could understand what exactly they mean.

For myself personally, the end of this policy has been a long time coming - it is outdated and hierarchical.

For those of us currently in our late 20s and throughout our 30s, we remember going through the streaming process and wondering if it was actually what we wanted to study. Did we really need to understand the subjects of the science stream like biology and chemistry if we did not want to go into medicine?

For myself, I saw classmates who took physics but dropped the two subjects to study drawing and art, or maybe accounting and economics. I hope it worked out fine for them now, but there was always some snide remarks from teachers over the issue initially.

And that was not done by the students, but drilled into them by parents and teachers unintentionally by way of peer pressure - it somehow went on to become a mantra of “get good grades, make sure you get into the science stream to get a better career in the future”.

It then devolved into the notion that you have more choices in college if you take the science stream.

These thoughts became so ingrained that society forgot to ask the student what exactly you wanted to do, and whether what you were studying was tied to what you believe you want to do.

And so, for myself at least, I see Maszlee’s actions as a way to end this. At the same time, I see those detractors as people who are worried about being unable to show off their kids’ brainpower by saying they got into the science stream.

Of course there are valid concerns - will schools be able to cope with the multiple subjects the kids will choose? What about entrance into colleges, will students somehow no longer be able to take degrees and diplomas if they did not take the related subjects in schools?

Will all subjects be able to be chosen as a free for all, or will there still be insistence on core subjects – and I’m sure a lot of students will want to drop Moral Education, whilst some parents are venturing into the idea of dropping Islamic Education. In fact, I personally hope they make this one optional since some parents already send their kids to evening religious schools anyway.

These are issues the Education Ministry will have to clarify in time, with feedback from universities and how they plan to apply their criteria for each and every degree or diploma programme entry.

But more importantly, the ability to pick and choose subjects will undo the hierarchy of streams in schools. It is the empowerment of students to choose their passions and interests, and to delve into them thoroughly.

Or, it could be the guy who is good with his hands, who now can ask to take vocational subjects to focus on what he is good at rather than be depressed by bad grades in subjects he has no passion for.

What the Education Ministry is doing is devolving freedom of choice for students from the tertiary education level down to secondary education. And for myself, that is a good deal for the kids of today.