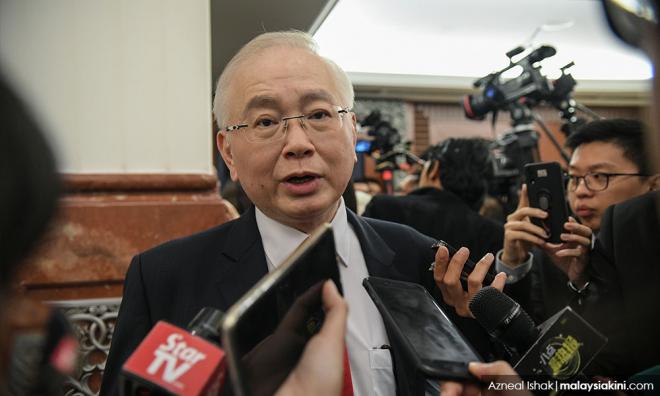 MCA president Wee Ka Siong has called on the government of the day to sit down with Universiti Malaya and settle the escalating issue over a protest by one of its graduates against the university's vice-chancellor (VC).

He said the government should address the root cause behind the protest by engineering graduate Wong Yan Ke during the varsity’s convocation ceremony which Wee said stemmed from VC Abdul Rahim Hashim’s controversial speech at the Malay Dignity Congress earlier this month.

“[...] I am disappointed with the government leaders, especially (Education Minister) Maszlee (Malik) and (Deputy Minister) Teo Nie Ching. They should speak up as this is under their ministry, and they can't let this issue get out of hand,” he said.

The Ayer Hitam MP said the Pakatan Harapan administration should have taken the matter into their hands immediately and not wait for the dust to settle.

“[...] You ( the Pakatan Harapan government) should be more sensitive towards all these issues.

“You cannot remain silent as though this whole issue can be settled immediately if you lie low. So there must be immediate action from the government to sit down with the university,” Wee said to reporters at Parliament lobby today.

The solo protest by Wong took place on Monday. As he was exiting the stage upon receiving his graduation scroll at the Dewan Tun Canselor, Wong held out a placard accusing Abdul Rahim of racism and called out for the latter’s resignation.

Wong was protesting Abdul Rahim’s alleged racist speech at the Congress in Shah Alam which was organised by UM’s Malay Excellence Studies Centre.

In his speech, Abdul Rahim allegedly claimed the change in government after GE14 had eliminated Malay political dominance and asserted that Malay privileges were being questioned.

The UM VC is also alleged to have warned others not to challenge the social contract.

Wong’s actions solicited both praise and criticism, with UM lodging a police report against the graduate. The university had said while it respects free speech, it must be practised at the right time and venue.

Wong is currently being probed under Section 504 of the Penal Code for intentional insult with intent to provoke a breach of the peace.

He also claimed UM is withholding his academic transcripts.

Many, including Prime Minister Dr Mahathir Mohamad, agreed that a convocation ceremony was not the right place or time to demonstrate. The prime minister added that the government would not interfere in the matter.

Meanwhile, a group of UM alumni defended Wong’s protest, deeming it reasonable and in accordance with the law.

Abdul Rahim has yet to personally comment on the matter and neither had Maszlee or Teo.

However, concerning an earlier statement by UM Student Union vice-president Yap Wen Qing calling for Abdul Rahim to resign over his speech and for failing to look after university finances and student welfare, Maszlee advised Yap to meet with the VC directly to air any grievances.

The Ketereh MP said freedom of expression must be respected, even if he disagreed with the graduate’s choice of protesting during the graduation ceremony.

“Wong Yan Ke solo protest at UM convo (sic) should be treated with mercy and compassion.

“Young people should be encouraged to speak up. Freedom of expression must be respected.

“But I disagree (with) the occasion he chose to express his feeling (at),” Annuar tweeted today.