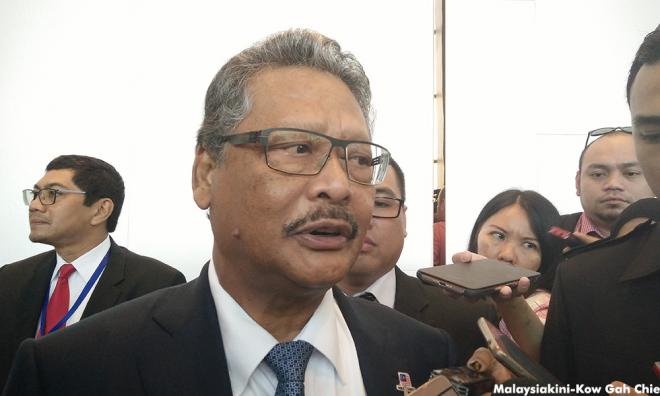 YOURSAY | ‘If we failed to do our work, we should not blame others for doing our work.’

On 1MDB and DOJ, MACC passes ball to police

Odin Tajué: It is illogical to expect Malaysian Anti-Corruption Commission (MACC) chief Dzulkifli Ahmad to investigate the additional information regarding the alleged theft of humongous sums from 1MDB.

It is not a matter of whether he has bollocks, principles or whatever. As he has been put in his position by ‘Ah Moi’, his instituting of investigation into the matter would amount to committing suicide.

The same thing goes with the inspector-general of police (IGP), the Bank Negara governor, and the attorney-general (AG).

Even if Dzulkifli is foolhardy enough to charge on and complete his investigation, he will still need to submit his reports to the AG. The AG will more likely than not to find his (Dzulkifli’s) reports lacking and ask for more work to be done, or even declare outright that the documents lack sufficient evidence to enable prosecution.

This is to frustrate the move to bring the culprits to book. The result will be that Dzulkifli will find himself transferred elsewhere and end up in cold storage.

It is plainer than daylight that the AG will, even at the expense of losing any respect from the hoi-polloi, do anything to ensure that all involved in the alleged theft will not have to answer for their wrongdoing.

The whole problem has arisen due to the system in place. Bodies that ought to be independent are not. Until the system is changed, the 1MDB-SRC scandal will never be brought to a proper closure and the guilty punished.

Kim Quek: The MACC chief and the IGP are effectively saying: “1MDB is completely out of bound to us. There will be no further probe on 1MDB.”

Imagine allegedly the greatest daylight robbery of public funds in this country, and possibly in the world, has hit us and yet the victims - the people - can only watch helplessly and silently with our own law enforcers completely immobilised, while the whole world watch aghast at the goring details of such alleged abominable crimes unfolding, bit by bit and day by day.

This is the kind of frustration that ferments mass unrest that may even lead to unconstitutional means to resolve the issue elsewhere. The only viable alternative here is to vote the incumbent regime out, if we want to restore the rule of law and keep Malaysia as a functional democracy.

Paul Warren: As for the police, their starting point can only be if 1MDB makes a police report that its assets have been stolen by somebody. Have 1MDB done that?

They have a lot of units which they say have “value” (they are not talking about the money). So, the police are stuck. No report of stealing. Nothing was stolen.

If I were to report to the police that someone has stolen from my friend. But my friend himself has said nothing is stolen, will the police investigate?

But now, America has found the stolen property. It, to them, is stolen property. Should they, or can they, seize it? And if they seize it, can 1MDB or the owners of 1MDB complain about the seizures?

Anonymous #03815719: Indeed, if we failed to do our work, then we should not blame others for doing our work.

RM2.6 Billion Turkey Haram: It boils down to one thing. All the heads are utterly useless and fear Malaysian Official 1 (MO1) more than the wrath of God, in whose name they swore on upon assuming office.

Stop playing games with the people. It is better to say we will not investigate and we the people can then pray and hope that US Department of Justice (DOJ) will bring them to justice as soon as possible.

Rupert16: AG Mohamed Apandi Ali, show us the evidence that no crime has been committed by PM Najib Razak in connection with the 1MDB scandal.

For the record, you dare not even show us the auditor-general's report or the Public Accounts Committee (PAC) report on 1MDB. Your verbal denial is certainly not good enough.

Gerard Lourdesamy: Yes, declassify the Auditor-General's Report on 1MDB if the government has nothing to hide.

The DOJ has comprehensively denounced the AG's previous statement on the so-called Malaysian investigations and referred to the auditor-general's report that was leaked but not denied as to its authenticity by the government.

If allegations of criminality are disclosed in a civil suit, shouldn't the AG as public prosecutor be under a constitutionally mandated duty to investigate the allegations impartially, without fear or favour?

The reluctance of the persons named in the DOJ suits to sue in the US for defamation, malicious prosecution, abuse of process and tortious interference speaks volumes as to who is telling the truth and who is distorting it.

6th Generation Immigrant: Even if AG says no crime had been committed, which is a total lie, all he needs to do now is to investigate Najib's and his wife Rosmah Mansor's accounts and compare them to their filed tax returns. Credit card statements are also easily available locally.

Simple deduction will surely raise tons of questions - do their official incomes commensurate with their assets, liabilities and expenditures?

But little do they know that Jho Low bought a yacht costing US$250 million (more than RM1 billion) with money allegedly stolen from 1MDB.

With that, a million BRIM (Bantuan Rakyat 1Malaysia) recipients can have RM1,000 each. Are they indifferent or are they ignorant of what's happening around them?