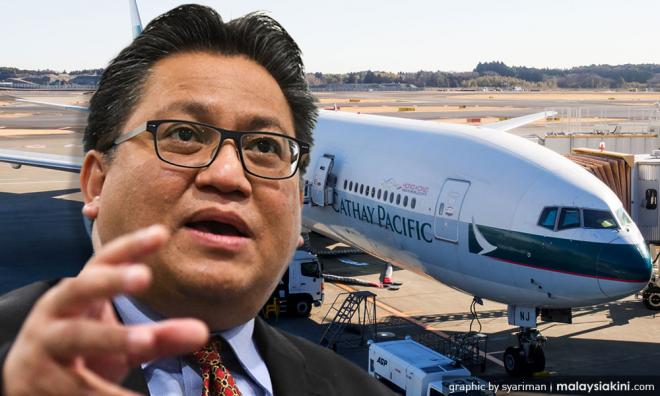 YOURSAY | 'Perhaps our ministers have forgotten the basic fundamentals of good service...'

Otherwise, why would he take issue with an airline giving Malaysians the opportunity to change their travel plans to accommodate the coming elections?

AliTanApu: Nur Jazlan supports the Election Commission's (EC) redelineation of constituencies to try to secure a victory for a kleptocracy, but he opposes a travel concession given to voters by Cathay Pacific?

Anyway, Nur Jazlan, your obvious lack of even the most basic power of comprehension may not allow you to understand this, but let me tell you that if the result of GE14 leads to a regime change, that simply means it is part and parcel of the democratic process.

Vijay47: I am sorry, Nur Jazlan, but since I am not an Umno member, I don't really understand what you are mumbling about.

Why is Cathay Pacific's offer not being appreciated and is instead viewed by you as something partisan, or like you allege, an interference into Malaysian politics towards a regime change?

Why should an incentive to Malaysian citizens to return home to vote be seen as hostile to Umno? After all, Cathay Pacific did not stipulate that the offer is for only those who would vote the opposition.

Umno could also earn extra votes from the returning voters. In fact, Malaysian Airlines (MAS) and AirAsia should have similar promotions too.

Further, you suggest that Cathay Pacific’s "election return" concession is suspicious since it is not being offered for other local festivals including your birthday.

Do businesses usually have special deals that are available year-long? Malaysians would be glad that at least for this occasion, they can cut some expenses should they change travel plans.

Cathay Pacific wouldn't need to offer passengers last minute change of flights if BN did the responsible thing like real democracies do, that is, to announce the general election date months in advance, instead of playing 'guess the date' with the voters.

Honest: Good job, Cathay Pacific. I have been flying with Cathay Pacific regularly and this gives me even more reason to continue to support them.

Nur Jazlan is an idiot. It seems he wants less urban people to vote because Umno knows that urban folks are more likely to vote for the opposition.

What kind of minister discourages the country's citizens from voting?

Middle Path: From the response by Nur Jazlan, we can deduce there's a conspiracy by some in the cabinet of not wanting voters to return to vote.

He should be thankful and praise Cathay Pacific for the fee waiver of the re-booking fee instead of accusing it with unfounded accusations.

Anonymous 2460431488547967: Jazlan's comments are getting more and more bizarre by the day. If on polling day, it rains or gets too hot, would he say that God is taking side for or against BN?

As deputy home minister, he should be encouraging the democratic process and bigger voter turnout, regardless of who voters may be supporting.

Now that Hong Kong-based billionaire Robert Kuok's blaming saga is over, it's Cathay Pacific's turn. What else is next?

Boeyks: Who created this need for flying back to vote in the first place? If all those who are working overseas are allowed to do postal votes, then Cathay Pacific's business plan would fail.

And what about giving freebie haj trips using money whose source can’t be proven - is that a business plan to get votes too?

Loyal Dog: Nur Jazlan, does it also mean that if this airline refuses to entertain passengers' request to change their flight date, it would be considered supporting the current regime?

Wiser: How paranoid! Business is all about making money. And of course, that means providing good service to customers in hope they would become repeat customers.

That's why some businesses are successful. Those who forget to provide the best service at all times to customers will fail in their businesses. Arrogance has no place in business.

Perhaps, our ministers have forgotten the basic fundamentals needed in servicing the rakyat, hence they question Cathay Pacific's motives?

Cogito Ergo Sum: Nur Jazlan, like your fellow ministers, you have a siege mentality. You are aware that the people want a change. That makes you paranoid in mistaking good service, which you do not understand, for facilitating a change of government.

Perhaps, in your analysis, you fear a big turnout that would mean a Malay tsunami. You have used all sorts of laws and tricks to ensure that your party remains in power. Unfortunately, even foreign entities understand your evil, bullying and trampling ways.

I hope this will be your last portfolio before GE14.

Anonymous 2413471460628504: Talk about "siapa makan cili, dia yang rasa pedas" (admission of guilt). The whole world is not against BN, unless of course they have done wrong. Have they?

Royal Salute 21Y: Nur Jazlan, regimes are like diapers and underwear, which must be changed when they are soiled.

Simple Malaysian: Can this baseless accusation be construed as fake news? If so, Nur Jazlan has just started one! This also tells us that the fewer the overseas Malaysians return to vote, it would ensure no regime change.