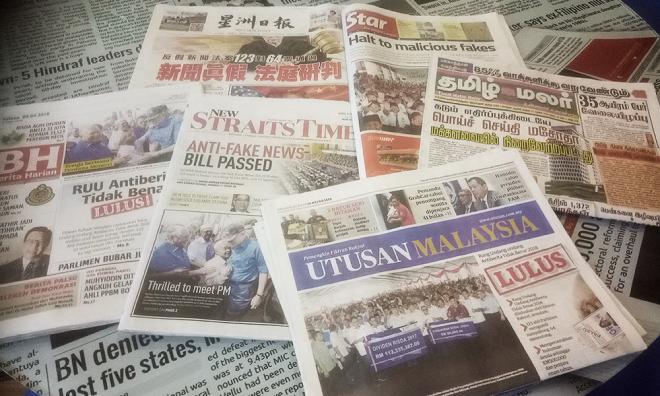 YOURSAY | 'What is true or fake cannot be determined by anyone, least of all the government of the day.'

Asitis: The Anti-Fake News (AFN) law was badly (and possibly, maliciously) conceived by the previous BN government and was passed hastily without adequate debate in parliament. I think it should be abolished.

I think what we want is a law which prevents people from spreading fake news with malicious intent. Towards this end, we should review existing laws to see if they are adequate and if not, improve on them.

Having another law just to deal with fake news when existing law can already appropriately deal with it is not only unnecessary but will also constrict the basic freedom of expression of the people.

We do not want to feel that we are living under another repressive regime again.

Quigonbond: Dear PM Dr Mahathir Mohamad, this wasn't the deal. The deal was to repeal the AFN law because we have enough laws to deal with fake news.

The idea is that incitement, especially of racial and religious hatred, will be dealt with by a National Harmony Act that has already been drafted but never enacted because of the strong Malay/Muslim lobby. It's a shame.

Pakatan Harapan leaders must meet more often because you are going to be asked all these questions which you should be anticipating the journalists to ask.

There must be a common understanding so that all of you don't give different answers or answers that may differ from what senior politicians have told the public last time.

Ian Chai: I totally agree with Quigonbond. Please repeal the law, Mahathir. If they lie and slander, just sue them for defamation. We need freedom of the press.

Please don't go back to the "bad old Mahathir" that we had opposed during Reformasi (in 1998). No more Operasi Lalang-style repression.

Cogito Ergo Sum: Yes, the law must be repealed. Apart from being an election promise, it makes no sense when there are other more definite and well-defined laws.

The AFN is so subjective that it can be open to abuse. The presence of this law gives Malaysia a repressive atmosphere. I hope it is repealed.

BuatApa?: That's a dumb idea, Mahathir, and you know it from your previous emperorship of the country that there are enough draconian laws to ensure nobody creates chaos.

You might want to look at the other despotic laws under which you and former PM Najib Razak have ruled Malaysians and drove them to fear and repeal them if you are genuine about restoring the rule of law and democracy.

One can't work without the other. Are you genuine about restoring rule of law and democracy or are you merely mouthing off like a populist again?

Shibboleth: Mahathir, you must keep to your promise and abolish the AFN law.

But you can introduce a new law, ‘Truth Reporting Law’, which has a provision to set up an Appeal Board to listen to complaints and determine what's the truth or a lie based on the evidence. Of course, it must have the power to convict and issue fine.

But politicians of all colours should also have thicker skin – it’s par for the course.

Gerard Lourdesamy: Yes, just abolish it first. Then set up a parliamentary select committee to study the creation of such a law with the full participation of the stakeholders and the public.

In the interim, there are enough provisions in CMA and the Penal Code to deal with news that incites violence, racial or religious conflict.

Rippoh2016: Dr M, I think the consensus here is that this ridiculous Act should be abolished and erased for good from our history. Please don't go back on your promise.

Anonymous_3e93: No matter how great and shrewd Mahathir is, the rakyat must understand one thing. There needs to be checks and balances.

If Mahathir had run things and made decisions unilaterally before, accept this new normal: from now on, accept there will be voices to caution him when he steps out of the line and he needs to respect that.

He must realise that this is not Umno. This is not BN. The order of business must be transparent and follow the due process. This is sacred in a true democracy. But of course, you have to find the right balance in order to achieve this.

Mahathir, as a matter of policy, cannot just allow anyone from BN to cross over and join Bersatu. Clearly, the shoring-up of Bersatu’s powerbase through crossovers will serve Mahathir well.

But in the longer term, you will find Harapan’s values being degraded as more and more of these Umno elected representatives are being allowed to be freely absorbed into the ruling coalition.

Mind you, these BN leaders have never embraced Harapan’s values and culture. They’re here merely to preserve their political survival and they now find BN 2.0 as an effective platform, steered by the ingenuity and shrewdness of Mahathir.

So, all you super enthusiastic netizens out there, beware of this man (Mahathir).

Anonymous 381541456985626: Party hopping should be stopped and prevented. It is the public right to choose their political representatives.

But it is very disappointing to see them jumping and failing the public who chose them. Beside that, these bad apples may spoil the good apples which the whole rakyat have picked.

I hope and pray that the new government will implement anti-hopping law as soon as possible.

Ash Burn: Indeed, I would like to see a simple majority government with an effective and loyal opposition. Loyal to the people, too. Of course, it’s messy. But democracy is messy.

Kikyo Today: BN defections benefit Bersatu disproportionately. Dr M's priority, we hope, is reform and welfare of the people rather than his own political base.