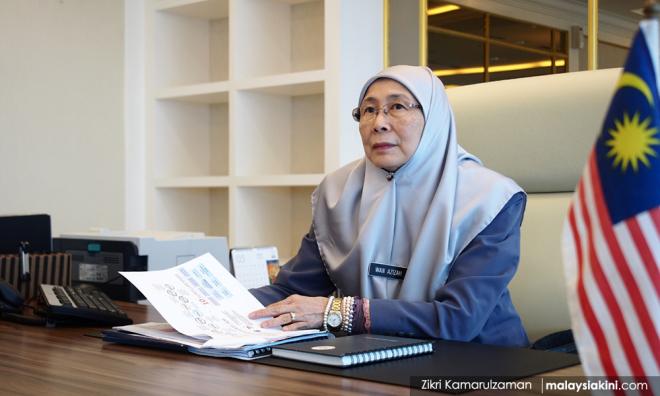 DPM calls on M'sians to fight 'social disasters' together

The people in the country are faced with both natural and social disasters which they must combat together, says Deputy Prime Minister Dr Wan Azizah Wan Ismail.

Wan Azizah said that since taking over the post of women, family and community development minister after the 14th general election in May, she has encountered many social problems, including cases of children becoming victims of paedophiles and sexual harassment.

“When children marry (adults), it is akin to the sexual act of a paedophile, which have to fight together.

“Therefore, our country is not only challenged by natural disasters, but also social disasters, which we may not see with our eyes, compared to natural disasters which manifests physically before us,” she said at the opening of a dinner of Islamic Medical Association of Malaysia (Imam) here tonight.

In another development, Wan Azizah praised Imam's initiative in building a home for women and children infected with HIV/AIDS since 1998.

She said the home established with the cooperation of religious experts and the Health Ministry has become a model Islamic approach to contain HIV/AIDS infection.

She also expressed her appreciation of the noble act of Imam which involved voluntary activities as well as health and dental treatment for the marginalised members of the community, especially Rohingya refugees in the country and in Cox's Bazar, in Bangladesh.

“At the international stage, several Imam members have also led the Federation of Islamic Medical Associations (Fima) which encompassed 50 countries,” she said.

Wan Azizah also pointed out that Imam is working with Fima to channel clean water to places which needed the resource all over the world through the Fima Safe Water project.

In this regard, she expressed her appreciation of Imam which upon its establishment in 1990, had immediately made her husband Anwar Ibrahim as the association’s patron as well as taking care of Anwar’s health when he was in detention.