Finding my replacement for GE13 and the PKFZ scandal

Editor’s note: This is the third part of a series of excerpts from former health minister and MCA president Chua Soi Lek’s book, ‘Like Me or Hate Me: Rising from the Political Ashes’.

BOOK EXCERPT | About two weeks after my resignation in early January 2008, it became obvious that the general elections would be held in March. Hence, it was necessary for the MCA to decide who should stand in the parliamentary seat for Labis as soon as possible.

Despite the political problems generated by the distribution of the DVD, the MCA’s Labis division unanimously put forward my name. Since the DVD issue was very much alive, I was not particularly enthusiastic.

Although reliable sources indicated that the Special Branch had concluded that voters still regarded me as a winnable candidate, I declined. Instead, I suggested that the MCA’s Labis division convene a meeting to consider alternative candidates.

After the meeting, the division proposed these four names:

Sometime before nomination day (24 February), President Ong Ka Ting asked me to meet him at the Palace of the Golden Horses Hotel in Kuala Lumpur.

It was a rather short meeting to discuss potential candidates for the Labis constituency. There was hardly any exchange of pleasantries.

This came as a surprise to me, especially since I had known Ka Ting since the early 1980s.

He was fully aware that when I resigned suddenly as a minister, it would definitely upset not only my family life but also my financial commitments. But he did not even bother to inquire about my family or my financial position. Anyway, I took it in stride that there will always be comrades who are only friends when the going is good.

He asked me whether I would be willing to campaign for any candidate put up by the party. He wanted to send in parachute candidates from other MCA divisions, and realised that my influence in the constituency would be important to ensure success.

I told him in no uncertain terms that for the sake of the party, I would help in the election, but only if the candidate was recommended by the division.

I reminded the president that MCA lost the Bekok state seat (in the Labis parliamentary constituency) in the 1990 general election even when the MCA candidate was an exco member. I also reminded him that Labis was a non-Malay majority seat in which Chinese and Indian voters made up more than 60 percent of the voters. In other words, it was not an easy seat for the government to win.

The MCA president went through the name list proposed by the Labis division. He told me that Tan Kok Hong was already an exco member and should not be shifted. Tee Siew Kiong was not suitable as a member of parliament due to his lack of tertiary education. 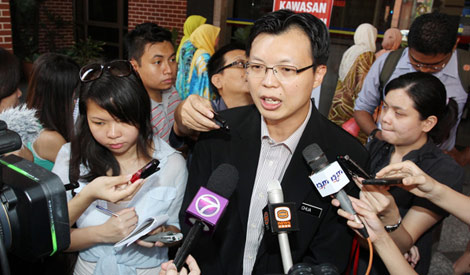 The choice was between Chua Tee Yong (above) and the two parachute candidates he had in mind. I reaffirmed my stance that I would only help the candidate recommended by the Labis division.

Ka Ting was disappointed with my attitude and we parted with no decision on who the candidate would be.

Tee Yong was working as a chief financial officer in DRB-Hicom Defence Technologies Sdn Bhd, a subsidiary of the government-linked DRB-Hicom. When he was named as a candidate, there were accusations within the party that the Labis parliamentary seat had become the private property of Chua Soi Lek.

Well, since Tee Yong was my son, such accusations were to be expected. But being named as a candidate did not automatically enable someone to be a member of parliament. It was the rakyat that decided. Hence, the accusation was misplaced...