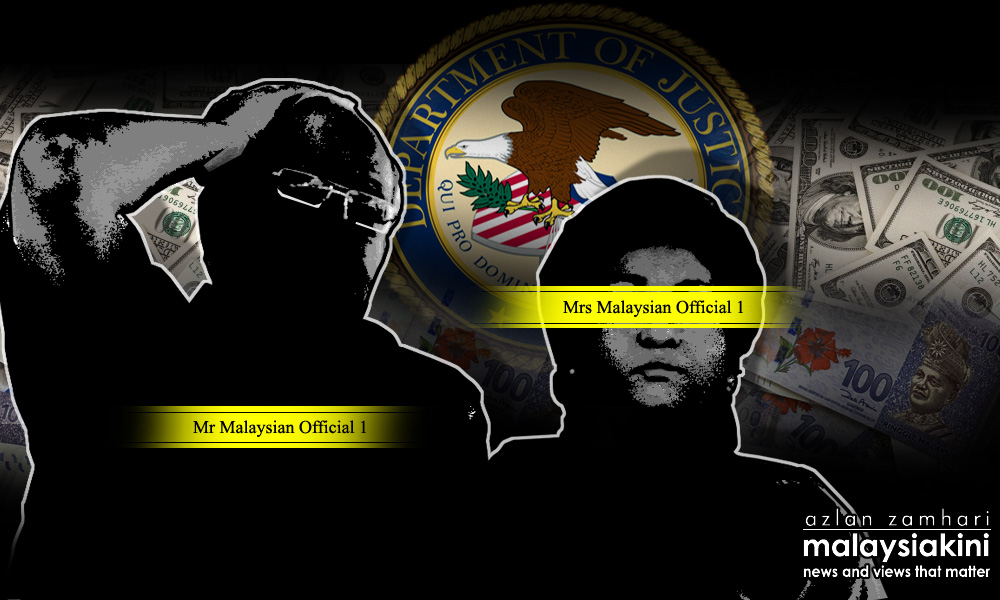 Former prime minister Najib Abdul Razak, his wife Rosmah Mansor and stepson Riza Aziz were referred to in several charge documents related to the indictment of fugitive financier Jho Low and senior Goldman Sachs bankers by the US Department of Justice (DOJ).

While not named in full, the DOJ documents mentioned "Malaysian Official #1" and described the person as a "high-ranking official in the Malaysian government and the MOF (Ministry of Finance) from in or around at least 2009 until in or around 2018 with high-level authority to approve 1MDB business decisions".

This comes as Jho Low was indicted, in absentia, alongside former Goldman Southeast Asia chairperson Tim Leissner and its former managing director Roger Ng for multiple counts of money-laundering involving billions in US dollars from 1MDB and conspiring to violate the American Foreign Corrupt Practices Act (FCPA), which also details alleged instances of bribery involving Malaysian and Abu Dhabi officials.

The charge documents for Leissner stated that while the approximately US$6.5 billion raised by the three bond transactions was to support 1MDB projects, "more than US$2.7 billion was instead misappropriated by the defendant (Leissner) and his co-conspirators and distributed as bribes and kickbacks to government officials in Malaysia and Abu Dhabi, including... Malaysian Official #1 and Abu Dhabi Official #1, as well as to other co-conspirators and their families, including Leissner, Co-Conspirator #1 (Low) and Co-Conspirator #2 (Ng)."

On 'Project Maximus', the documents stated that Leissner was aware that "Malaysian Official #1", government officials from Abu Dhabi and 1MDB officials, among others, would receive money from the proceeds of the bond transactions that passed through various shell companies "beneficially owned and controlled by himself, co-conspirator #1 and others to influence those officials to execute the bond with US Financial Institution #1.

"Abu Dhabi Official #1 and a close relative of Malaysian Official #1, among others, received some of these funds."

As for Rosmah, the documents referred to her as the “wife of Malaysian Official #1” and claimed that money was used to pay for jewellery, including the infamous pink diamond necklace.

Other court documents on Low also alluded to Najib's stepson, Riza, as one of Low, Ng and Leissner's co-conspirators.

Referring to Riza as "a close relative of Malaysian Official #1" and 'Co-Conspirator #3', the DOJ claimed that proceeds from the bond transactions, dubbed 'Project Magnolia', were transferred to the latter. This was later used in the production of the Hollywood movie The Wolf of Wall Street, which starred Leonardo DiCaprio, among others.

"After Project Magnolia closed on or about May 21, 2012, more than US$500 million of the bond proceeds were allegedly misappropriated and diverted from 1MDB through numerous wire transfers to bank accounts in the name of shell companies beneficially owned and controlled by Low, Leissner, Ng, and other co-conspirators, including a high-level official at the Abu Dhabi entity that guaranteed the Project Magnolia bonds and a close relative of Malaysian Official #1.

"As alleged, the bond proceeds transferred to Malaysian Official #1's close relative were later used by the relative's US motion picture company to assist in the production of the film 'The Wolf of Wall Street," it added.

It was previously reported that the DOJ had accused Red Granite, the film production company co-founded by Riza, of using money stolen from 1MDB to finance films including The Wolf of Wall Street, Daddy's Home and Dumb and Dumber To.

Although never admitting liability or wrongdoing, Red Granite was to pay US$60 million in three instalments over a period of one year in a settlement reached with the US earlier this year.

The case was closed in September.