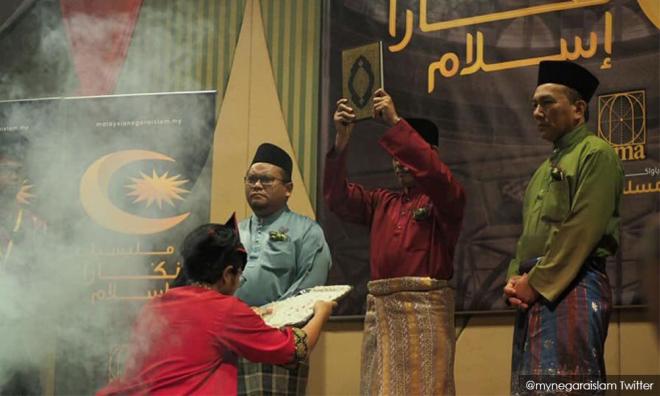 Do we need an Islamic state to live like good Muslims?

COMMENT | Do we really need to be declared an Islamic state in order to live like good Muslims?

Because I am wondering what is it that prevents us from doing everything we can to live as good Muslims right now.

It is by the grace and mercy of Allah that everyone, regardless of their ancestry, found their way to this blessed country the way they did. The challenge of living together is a test by Allah where we are told to race to put our best foot forward, and let Allah be the sole judge of all our earthly disputes [5:48].

Those who call for Malaysia to be declared an Islamic state need to tell us by what definition of Islam is this state to be built upon, and if this move will isolate our country even further from the modern Islam embraced by the rest of the world.

As it stands, the rest of the Islamic world is moving to criminalise all forms of female circumcision - but Malaysia feverishly defends the practice with a fatwa which still stands today.

The rest of the Islamic world is campaigning to end child marriage - but Malaysia defends this as even a ‘necessity’ in certain states.

The rest of the Islamic world has moved to end racism in their countries - but Malaysia insists that certain racial superiority over the land must prevail for the sake of social fragility.

An Islamic state led by politically motivated parties whose priority is to exert power by policing morality instead of prosecuting corrupt leaders will be a devastating downfall for Malaysia.

Ibn Abbas reports that our beloved Prophet once said: The most hated of the people to Allah are three persons: A person who deviates into the unlawful; a person who seeks for the tradition of ignorance to remain in Islam; and a person who seeks to shed another’s blood without right of justice [Sahih al-Bukhari 6488].

Why can’t we just be good Muslims in a progressive country which embraces modernity, and is friendly with all nations East and West?

Because if we can do it here, we can do it anywhere, and seriously, isn’t that what we want? For Malaysians to be globally savvy, instead of a Malaysia that is paranoid and suspicious towards everything that comes from outside our borders?

I wonder about the fragility of the faith of an ummah (Islamic community) that is built upon the fear of humans and not love for God. I wonder about how they would fare on the stage of the great wide world out there.

I wonder about thought - and how it can be frightened into obedience, or nurtured to imagine fantastic futures. A world where people no longer need to be afraid. A world where people no longer suffer. An end - as our beloved Prophet brought - to an age of ignorance, and henceforth, a great civilisation of knowledge and creativity brought upon by the liberated imaginations of Malaysians.

Regardless of whether we are an Islamic state or not, all the virtues of being a good Muslim can already be practised right now.

So instead of the terrible reputation of being instigators of anger and violence, can we work on being known for our kindness and generosity?

Aisha once reported that our beloved Prophet said: Allah is gentle and loves gentleness. Allah rewards for gentleness what is not rewarded for harshness, and rewards nothing else like it [Sahih Muslim 2593]. Even when threatened with harsh words, our Prophet responds with kindness, because Allah is kind and loves kindness in all matters [Sahih al-Bukhari 6528, Sahih Muslim 2165 (Muttafaqun Alayhi)].

And instead of competing over who is the more superior race, can we live with more humility and altruism?

In Sura al-Isra, Allah tells us not to walk upon this earth in arrogance and disrespect for others [17:37]. Indeed, Allah does not like those who are self-deluded and boastful [31:18]. Our beloved Prophet tells us that the reason for humility is so that no one oppresses another [Sahih Muslim 2865], because oppression will be the darkness on the Day of Resurrection [Sahih al-Bukhari 2315, Sahih Muslim 2579 (Muttafaqun Alayhi)].

Instead of isolating the Malay race and reinforcing a concept of otherness , can we be the ones who proactively take steps to champion integration, inclusivity and diversity in the country?

I think that Malaysia, being a relatively young country at the tender age of 61, is still at the age of getting to know each other - and that is okay. Our beloved Prophet tells us that we will not enter Paradise until we acquire faith - and we will not attain faith until we learn to love each other [Sahih Muslim 54].

The beauty of Islam is that it traverses cultures and countries, and that the virtues it promotes are ubiquitous and universal. We do not need to insist on an Islamic state in order to be good Muslims. And if the price of creating an Islamic state is the shrinking rights of non-Muslims and other minority groups, then there had better not be an Islamic state.

MAJIDAH HASHIM is Communications Manager for Sisters in Islam (SIS). She can be contacted via Twitter at @majidahhashim.