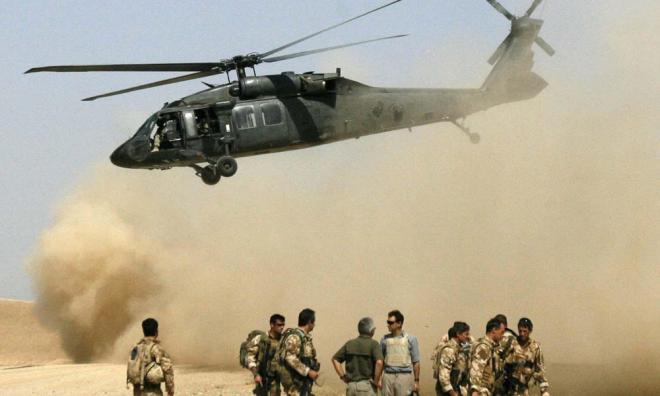 US-backed, Kurdish-led forces are on the verge of eliminating Islamic State militants’ last remaining enclave in Syria near the border with Iraq after a four-month devastating bombing campaign that has left hundreds of civilian casualties, residents and rebels said on Wednesday.

The capture of the village of Baghous comes after a string of other villages fell in recent days to the Syrian Democratic Forces (SDF), a Kurdish-led militia alliance, with aerial bombing strikes by the US-led coalition.

The SDF, who launched a major offensive last September to remove the militants from their last pocket, were at first bogged down by fierce resistance, but advanced last month when they finally took the town of Hajin, the main urban stronghold in the enclave.

The SDF has now only a seven-kilometre stretch that separates them from full control of the entire east of the Euphrates River region, former residents and insurgents from the area say.

Islamic State lost nearly all the territory it once held in Syria last year in separate offensives by the US-backed SD and the Russian-backed Syrian army.

The conquest of the last pocket near the Iraqi border marks a major blow, leaving the militants scattered in sparsely populated desert areas in eastern Syria.

To compensate for the loss of territory, the ultra-hardline militants are now expanding hit-and-run assassinations of SDF fighters and commanders and attacks on checkpoints, security analysts say.

“The militants are changing tactics and adopting guerrilla methods and will be now using hundreds of their sleeper cells to wage deadly attacks,” Sheikh Faisal Marashdah, a tribal leader, said.

Former residents in touch with relatives said at least 1,000 civilians left the enclave in the last 48 hours and handed themselves over to the Kurdish-led forces.

Among them were around 150 foreign fighters enlisted with the militants, and their families. Kurdish sources said they were taken to an undisclosed high-security camp further north for screening.

Resistance by an estimated several thousand militants fighting to the end collapsed after weeks of aerial bombing of the area that left many of the towns and villages in their hands on the banks of the Euphrates in ruins.

Residents and local activists have accused the U.S.-led coalition of indiscriminate bombing that they blame for killing dozens of civilians since the start of the campaign. The Pentagon says it is careful to avoid civilian casualties in its bombing raids and investigates any allegation.