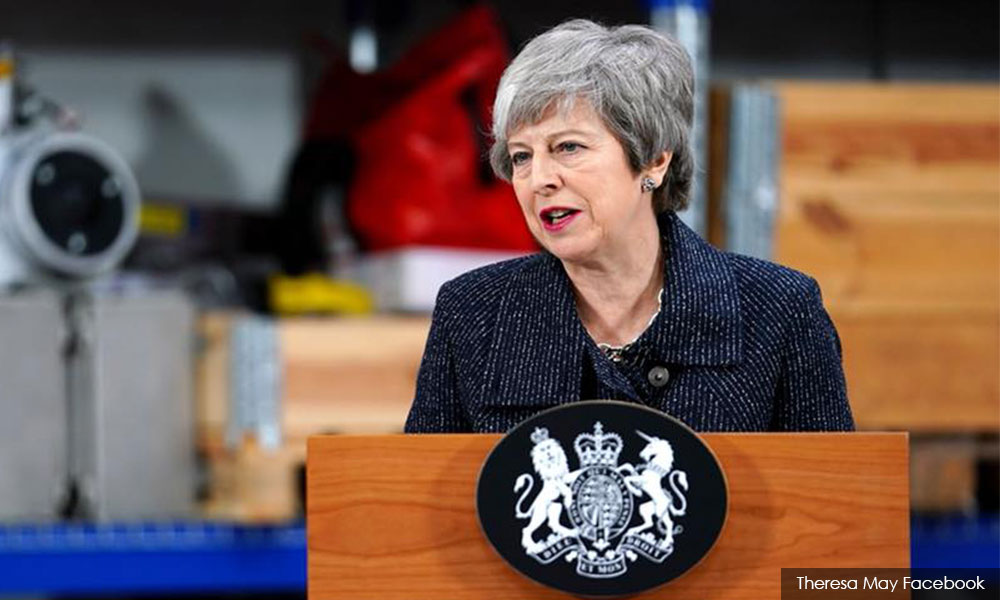 British Prime Minister Theresa May failed to sway hardline opponents of her European Union divorce deal on Wednesday with an offer to quit, but parliament's bid to agree an alternative fell short, leaving the Brexit process as deadlocked as ever.

May told her Conservative lawmakers she would step down if her Brexit deal was finally passed by parliament at the third attempt, in a last-ditch bid to win over many of her party's eurosceptic rebels.

But some were unmoved and the Northern Irish party, crucial to getting the agreement through, said it would reject the deal again.

Britain was supposed to leave the bloc on Friday, but Brussels agreed last week to put back the divorce date until April 12 to give it a chance to resolve a three-year crisis that has split the country down the middle.

However, it still remains uncertain how, when or even whether the United Kingdom, the world's fifth-biggest economy, will leave the EU. The possibilities that it will leave with no deal to soften the shock to its economy, or delay the departure date to hold a general election, have increased as other options fade.

While May's deal continued to stumble, an attempt by parliament to take control of the process by holding a series of indicative votes on other options produced no immediate way through the impasse.

None of the proposals, many of which involved closer alignment with the EU than May envisages, won the support of a majority of lawmakers.

"In a spectacular display of indecision, the House of Commons has voted against remaining in the EU and every version of leaving the EU," tweeted James Cleverly, the Conservative Party's deputy chairman.

Nevertheless, some proposals fared better than May's deal had done two weeks ago, and parliament was due to hold more indicative votes on Monday after refining the options most likely to secure a majority.

Many Conservative eurosceptics had made clear they would only consider supporting May's deal if she gave a firm commitment to resign, hoping a new leader would be more sympathetic to their views when negotiating the terms of Britain's future relationship with the EU.

"I have heard very clearly the mood of the parliamentary party," May told a meeting of Conservative lawmakers (MPs). "I know there is a desire for a new approach – and new leadership – in the second phase of the Brexit negotiations –and I won't stand in the way of that."

But within hours of May's offer, the Democratic Unionist Party, which props up her minority government, said it would vote against the deal if May brought it back a third time.

"We're in a situation where we cannot sign up to the Withdrawal Agreement," DUP leader Arlene Foster said.

The government gave itself the option of bringing May's deal back to parliament on Friday, although speaker John Bercow repeated his warning that he would not allow a third vote unless the motion had changed substantially since its last defeat.

May, who voted to remain in the EU in the 2016 referendum, had promised to step down before the next election, due in 2022.

Her deal, defeated in parliament by 149 votes on March 12 and by 230 votes on Jan. 15, means Britain would leave the EU single market and customs union, as well as EU political bodies.

But it requires some EU rules to apply unless ways can be found in the future to ensure no border posts need to be rebuilt between British-ruled Northern Ireland and EU member Ireland.

Many Conservative rebels and the DUP object to this "Irish backstop", saying it risks binding Britain to the EU for years.

To succeed, May needs at least 75 lawmakers to come over to her side.

After the ERG met, a spokesman said: "There is no way enough votes are coming out of that room to put the (Withdrawal Agreement) through."

While May was addressing her lawmakers, MPs in the main chamber debated eight other Brexit options, ranging from leaving abruptly with no deal to revoking the divorce altogether.

While there was no majority support for any, the option calling for a referendum on any departure deal, and another suggesting a UK-wide customs union with the EU, won more votes than May's deal did two weeks ago.

Oliver Letwin, a Conservative former cabinet minister who led parliament's unusual power grab, said it had been expected that none would immediately win a majority, and lawmakers would have another chance on Monday.

The uncertainty around Britain's most significant political and economic change since World War Two has left allies and investors aghast. Sterling dipped after Wednesday's events.

If May's deal were to pass, her office said there would be a contest to replace her after May 22, when Britain would leave the EU.

She would also become the fourth Conservative prime minister in a row to have fallen foul of divisions over Europe within her centuries-old party, following David Cameron, John Major and Margaret Thatcher.

Most voters think the Brexit negotiation has been handled badly and there may now be a slight majority for staying in the EU, recent polls suggest. Many Conservative MPs say May herself has caused the chaos by not negotiating harder with the EU.

"It was inevitable and I feel she's made the right decision. She has read the mood of the party, which was a surprise," said Conservative lawmaker Pauline Latham.

brexit
theresamay
resign
Related Reports
British MPs to seize control of Brexit for a day
a year ago
Brexit up in the air as May pushes divorce deal for third time
a year ago
Brexit mayday? May's ministers move to oust her
a year ago
EU leaders meet on May's request to delay Brexit until June 30
a year ago