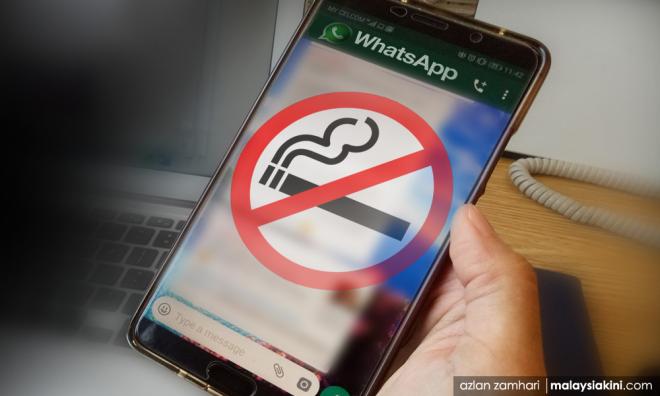 Health Minister Dr Dzulkefly Ahmad has confirmed that his ministry’s public hotline set up to receive citizens' complaints about smoking in restaurants and public places has been blocked by WhatsApp.

“According to the information I received, this block happened after there were complaints from the public who claimed the hotline had violated the terms and conditions of WhatsApp,” Dzulkefly said in a statement today.

An earlier report quoted a source from the Health Ministry which said privacy infringement is part of the Whatsapp terms and conditions.

“We are now consulting our legal experts to see how we can provide this complaints channel on WhatsApp without being accused of breaking the rules," the source said, as reported by Free Malaysia Today.

A check from Malaysiakini showed that messages sent to the public hotline on WhatsApp do not have a double tick to indicate that the recipient has received the message.

Dzulkefly said his ministry will have a discussion with Facebook, which owns WhatsApp, as soon as possible to find a reasonable solution to this.

Part of WhatsApp's privacy policy as stated on its website reads: You will not use (or assist others in using) our services in ways that: (a) violate, misappropriate, or infringe the rights of WhatsApp, our users, or others, including privacy, publicity, intellectual property, or other proprietary rights."

The hotline was meant to facilitate citizens to report on those who smoke in public places and restaurants, along with photographic evidence and the location of the offence.

Dzulkefly said his ministry will have a discussion with Facebook, which owns WhatsApp, as soon as possible to find a reasonable solution to this.

This comes after the Health Ministry imposed a smoking ban which came into effect on Jan 1 this year, with a fine of up to RM10,000 or three years jail on both customers and premise owners who failed to observe the ban.

However, the Health Ministry has provided a six-month grace period on the ban, which has since been extended until the end of the year.