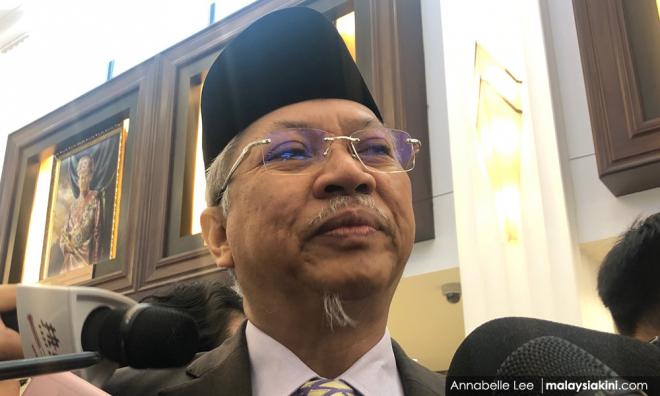 Umno secretary-general Annuar Musa (photo, above) claims that remarks from controversial preacher Dr Zakir Naik about Chinese and Hindu Malaysians have been taken out of context.

"Don't spin Zakir's full statement and the context of his speech. I read the full text of the speech and attended the talk on (Aug) 9th. Don't defame him," said the Ketereh MP.

The Youth and Sports minister had also backed calls for Zakir to be deported.

Zakir made the controversial remark during a talk in Kelantan on Aug 8 while speaking about the peaceful spread of Islam in the Malay archipelago.

"[...] Malaysia became fully Muslim. Then you have the Chinese coming, the Indians coming, the British coming. They are our new guests.

"You know someone called me a guest. So I said, before me, the Chinese were the guests. If you want the new guest to go first, ask the old guest to go back.

"The Chinese aren't born here, most of them. Maybe the new generations, yes.

"If you want the guest to go back, and those guests which (sic) are bringing peace in the community, they benefit (sic) for the family," Zakir told the audience in Kelantan.

He had also commented that Hindu Malaysians seemed to trust the Indian government more than Prime Minister Dr Mahathir Mohamad.

However, Zakir issued a statement yesterday saying that his remarks about Hindu Malaysians had been misquoted.

Zakir has yet to respond over his remarks on Chinese Malaysians, but Annuar, who retweeted a media article on the issue today, came to the defence of Zakir.

"This is not what he said... at least not in this context... listen to his full speech before giving any comments," Annuar said in a separate tweet.

Khat vs Zakir Naik - which is more dangerous?
15 Aug 2019
Marina takes aim at Zakir, netizens ask her to tell that to her dad
15 Aug 2019
Lawyer seeks police action after death threat over Zakir Naik
15 Aug 2019
K'tan PAS says not out for political gain by hosting Zakir Naik
14 Aug 2019