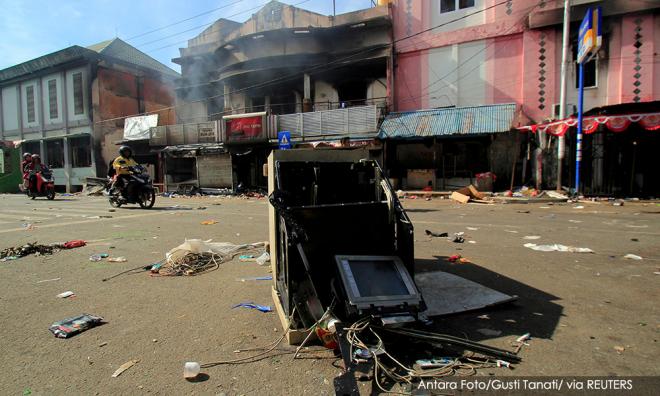 Indonesian police have banned violent demonstrations and speeches promoting separatism in the easternmost region of Papua, which had been rocked by protests for two weeks, the state news agency Antara reported on Monday.

Papua has been racked by the most serious civil unrest in years over perceived racial and ethnic discrimination. Some protesters have also been demanding a referendum on independence, something the government has ruled out.

Papuan police chief Rudolf Alberth Rodja issued six notices over the weekend, which included the ban on demonstrations and a list of criminal charges that could be brought against violators, Antara reported.

"Any person or organisation is prohibited from carrying out or spreading separatism in expressing opinions in public and violation of this will result in strict action and law enforcement," Antara wrote.

Police also said in the notices that spreading fake news was a punishable crime, the news agency reported.

Police have arrested 28 people in Papua for "damaging and burning properties, violence, provocation and looting", while two students have been arrested for treason in the capital, Jakarta.

Four Australians who allegedly took part in a pro-independence demonstration in the city of Sorong, West Papua, would be deported, immigration authorities said in a statement.

About 6,000 police and military personnel have been flown in to Papua, national police chief Tito Karnavian said, to reinforce a region that already has a heavy military presence, due to decades of mostly low-level separatist conflict.

"If necessary I will deploy more troops," Karnavian told reporters in televised remarks, adding that he planned to spend most of this week in the region.

Security was being maintained throughout Papua on Monday as police worked with figures in the region to control the situation, said national police spokesperson Dedi Prasetyo.

Television footage showed people cleaning up a partly charred building that protesters torched in the provincial capital of Jayapura.

At least one soldier and five civilians were killed in the rural town of Deiyai last week, among the deadliest of the latest demonstrations, Papuan police spokesperson Ahmad Kamal said.

The authorities and activists have different accounts of what happened in Deiyai.

An internet blackout across Papua has made verifying information difficult.

Papua and West Papua provinces, the resource-rich western part of the island of New Guinea, were a Dutch colony that was incorporated into Indonesia after a widely criticised UN-backed referendum in 1969.

The spark for the latest protests was a racist slur against Papuan students, who were hit by tear gas in their dormitory and detained in the city of Surabaya on the main island of Java on Aug 17, Indonesia's Independence Day, for allegedly desecrating a national flag.