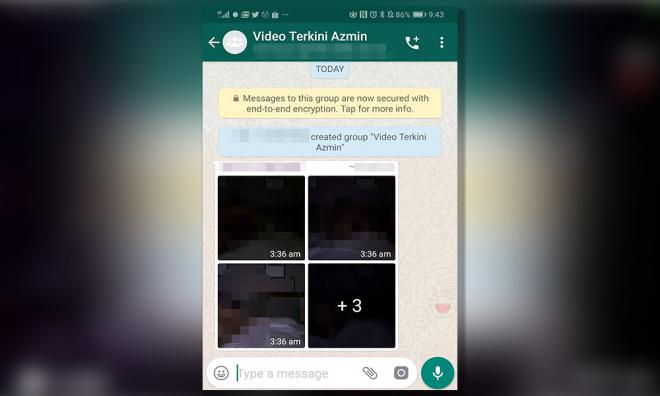 Like before, more than 80 members of the media and several politicians were added to a WhatsApp chat group in the wee hours of the morning.

The 'Video Terkini Azmin (Azmin’s latest video)' was set up at 3.35am. The video contained within was split into six three-minute clips and appears to be from the same video sent to reporters repeatedly over the past few months.

Following the release of the initial video clips in June, former Santubong PKR Youth chief Haziq Abdullah Abdul Aziz had claimed to be one of the men in the video.

Haziq (photo) claimed the romp took place in a hotel room in Sabah during the Sandakan by-election on May 11, and that the other man in the video was Azmin. He also said that the video had been taken without his consent.

Azmin, the PKR deputy president, described the video as a nefarious attempt to ruin his political career. Several quarters have also claimed the video could be a deepfake.

In July, Inspector-General of Police Abdul Hamid Bador said that Cybersecurity Malaysia found the video to be authentic, but that facial recognition failed to link Azmin to one of the two men featured in it.

Hamid also said that the leader of a political party was the mastermind behind the campaign to tarnish the minister's reputation, and speculation was rife that it could be related to the feud between Azmin and PKR president Anwar Ibrahim.

Anwar denied any involvement in the matter, despite his political aide Farhash Wafa Salvador Rizal Mubarak being among those arrested in connection with the case.

Lokman later claimed that the Indonesian experts he hired to analyse the video confirmed the duo to be Azmin and Haziq.

Police on Monday stated they have received a report from Birmingham-based Verden Forensics on the sex video. The video was submitted to the audiovisual forensics firm by Lokman.

The report has since been sent to Cybersecurity Malaysia while investigation papers have been forwarded to the Attorney-General's Chambers for further action.

Bukit Aman Criminal Investigation Department director Huzir Mohamed gave his assurance that the case is still being investigated under Sections 377B and 292 of the Penal Code, and Section 233 of the Communications and Multimedia Act 1998.

Sections 377B and 292 of the Penal Code deal with carnal intercourse against the order of nature and the dissemination of obscene material, respectively. Section 233 of the CMA pertains to the improper use of a network service or application.

Sex video: Lokman at Bukit Aman again to give statement
3 Sep 2019
Lokman hands over sex video analysis report from UK to cops
2 Sep 2019
So, what is the outcome of the gay sex video probe?
12 Aug 2019
Quizzed on sex video and power transition, Dr M vows not to break promise
31 Jul 2019