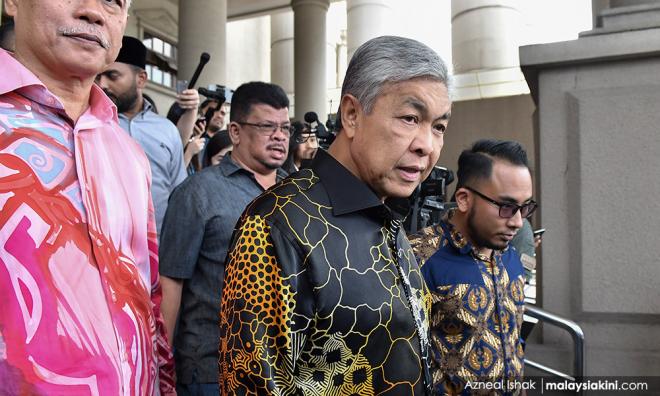 Zahid's corruption case to be filed for hearing in High Court

The Shah Alam Sessions Court was told today that 40 charges of receiving bribes involving the overseas visa (VLN) system faced by former deputy prime minister Ahmad Zahid Hamidi will be filed by the prosecution for hearing at the High Court.

Counsel Ahmad Zaidi Zainal who represented Zahid informed the court this during the proceedings for the management of the case in the presence of judge Rozilah Salleh.

“The defence and prosecution have discussed the matter and agreed that the prosecution will hand over all documents relating to the case to us in a month’s time. After that, we will file the case and apply for it to be heard in the High Court here,” he said.

DPP Gan Peng Kun also informed the court that he needed time as there were more than 500 documents being prepared to be handed over to the defence.

Rozilah then set Oct 25 for management of the case in the same court.

Earlier, Gan told the court the prosecution had withdrawn its application to transfer 33 charges of bribery faced by Zahid to be heard at the Kuala Lumpur Sessions Court.

On July 31, the prosecution applied to the Kuala Lumpur High Court to review the decision by the Kuala Lumpur Sessions Court agreeing to the request by Zahid to transfer seven charges for hearing together with 33 more charges of graft involving the VLN.

On June 26, Zahid was charged with seven counts of bribery amounting to S$4.24 million involving the VLN system two years ago.

On all charges, Zahid was charged with receiving bribery amounting to S$4.24 million from Syarikat Ultra Kirana Sdn Bhd, as incentive for him as a public servant, as home minister in the Home Ministry (KDN), to extend the contract of the company as operator of the one-stop centre in China, and the VLN system.

All the charges were made under Section 16 (a)(B), of the Malaysian Anti-Corruption Commission Act (MACC) 2009, and can be sentenced under Section 24 (1) of the same act, which provides for a maximum jail sentence of up to 20 years and fine up to five times the amount of bribery or RM10,000, whichever is higher, if found guilty.

On June 27, Zahid was charged with 33 more counts of accepting bribery amounting to RM42.76 million from a company involving the same system.

On 26 of the charges, the Umno president was charged with accepting bribes from Syarikat Ultra Kirana Sdn Bhd amounting to S$9,320,000 as incentive for him as a public servant, as home minister in the Home Ministry, to extend the company’s contract as operator of the OSC service in China and the VLN system, and to retain the contract agreement for the same company to supply the VLN integrated system to the ministry.

He was charged with committing all the offences at No 389, Jalan Bayu Nyaman, Country Heights, Kajang, between October 2014 and July 2017.

On seven more charges, Zahid was charged as a public servant, as home minister in the Home Ministry, with procuring for himself cash amounting to S$150,000, RM325,000, 15,000 euros and US$15,000 without reciprocation from the same company which had dealings with his official work.

Zahid was charged with committing the offence at the same place between June 2015 and April 2017 under Section 165 of the Penal Code which provides for a jail sentence of up to two years, or fine, or both, if found guilty.