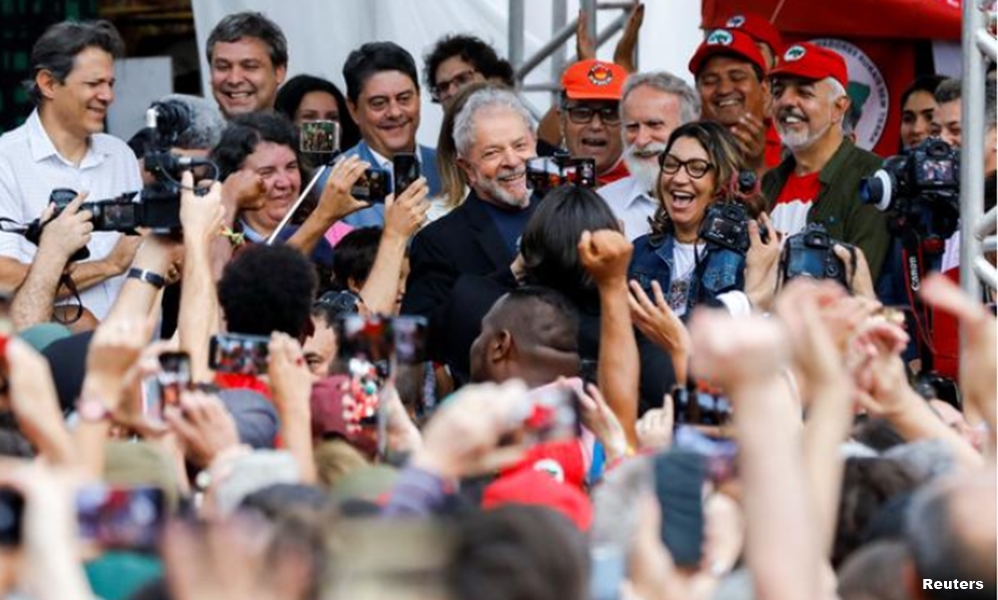 As he walked out of the jail that held him for 19 months on a bribery conviction, Lula raised a defiant fist in the air to the cheers of a crowd of supporters from his Workers Party who waved red flags and held “Free Lula” banners.

His release is expected to further polarise a country that elected far-right President Jair Bolsonaro last year in a vote that Lula said on Friday was “robbed” from his Workers Party, which governed the country from 2002 to 2016.

Investors were jolted by the prospect of Lula returning to the political stage and uniting opposition to the market-friendly government, although he is barred from running in upcoming elections.

Brazil’s currency and benchmark Bovespa stock index both fell 1.8 percent on Friday, weighed down first by a Supreme Court ruling paving the way for Lula’s release, and deepening losses after the formal court order letting him go.

“This will strengthen the Workers Party, but also anti-Lulismo and that will strengthen Bolsonaro’s movement too,” said Lucas de Aragao at Arko political risk consultancy in Brasilia.

The Workers Party’s weak coalition in Congress may limit the immediate impact on the government’s proposed economic reforms, but Lula’s presence could strengthen the Brazilian left ahead of next year’s municipal elections.

“The big question for markets is whether he can run in 2020, and that is very unlikely,” D’Aragao said.

A charismatic speaker and formidable campaigner, Lula is ineligible under Brazil’s Clean Record law to seek elected office until 2025. While he can otherwise engage in politics, his release from prison is pending appeals that may continue winding through the courts for years.

In his first speech to supporters outside his jail in the southern city of Curitiba, Lula vowed to fight to establish his innocence, accusing “rotten” police, prosecutors and judges of “working to criminalise the left.”

He called for a rally on Saturday at the metalworkers union on the outskirts of Sao Paulo where he got his political start, pledging to follow that up with a national tour.

Opponents who decried his release as evidence of impunity and backsliding in Brazil’s battle against political corruption also called for protests over the weekend.

In a sign of the fault lines stretching across Latin America, Argentina’s left-wing President-elect Alberto Fernandez was quick to celebrate Lula’s release on Friday and criticise his “persecution” by Brazilian courts.

The politically charged ruling is expected to free scores of high-profile convicts in the so-called “Car Wash” corruption investigation, including Lula, as the former president is known, who had been behind bars for a bribery conviction.

Lula was imprisoned in 2018 for eight years and 10 months after being found guilty of taking bribes from engineering firms in return for public contracts. He has maintained his innocence and said the case against him was politically motivated.

While Lula had fought to overturn the sentence, many urged the Supreme Court to overturn a prior ruling that convicts, including the former president, must do prison time before exhausting their appeals. On Thursday, the top court voted 6-5 that the precedent was unconstitutional.

Following the Supreme Court decision, Lula’s lawyer, Cristiano Zanin, was quick to request his release from a cell in federal police headquarters in the southern city of Curitiba.

Lula and his supporters have also criticised the fact that Sergio Moro, a former federal judge who oversaw the Car Wash probe and convicted Lula, accepted an invitation to become the justice minister of President Bolsonaro, a long-time foe of Lula and key rival in last year’s election.

Moro said in a statement earlier on Friday that the top court’s decision must be respected, and lawmakers can now change the constitution to make prison time mandatory after a first failed appeal.

While Lula’s release is sure to electrify Brazilian politics, it may not shift the balance of power enough to seriously disrupt the government’s economic reform agenda.

“Since the 2018 election, the left-wing opposition in Congress does not have enough votes to block the agenda,” said Leonardo Barreto, a partner at the Capital Politico consultancy.

“And don’t forget, Lula is free to walk, but he has not been acquitted, so he cannot be a candidate,” added Barreto. “He is not an alternative for winning political power.”