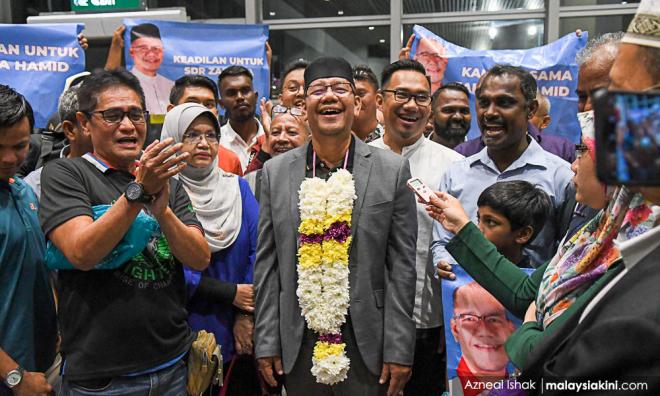 Yoursay: Intrigue over the sacking of a PKR member

YOURSAY | ‘The question is do you condone this kind of money politics?’

VP Biden: There is a huge trust deficit in the Prime Minister Mahathir Mohamad, Economic Affairs Minister Azmin Ali and Housing and Local Government Minister Zuraida Kamaruddin in the eyes of the rakyat.

This was compounded by the sleeping with the enemy at Azmin’s taxpayers-paid residence in Putrajaya. If anyone needs to be sacked, it's you three.

Tok Jangut: Well said, Zuraida. Corruption in all factions must be removed.

PKR member Zakaria Abdul Hamid, who is a former aide to Works Minister Baru Bian, is entitled to be heard before he is sacked. This is the law of natural justice.

Then deputy prime minister Anwar Ibrahim was sacked because Mahathir claimed that Malaysia cannot have a leader whose sexual orientation is abnormal.

Now that there is overwhelming evidence that there is another potential leader in his cabinet that has abnormal sexual orientation, why is it that this leader is still in the cabinet?

Slip Sliding Away: No need to get hysterical, Zuraida. You're a federal minister and you should conduct yourself with dignity.

Two wrongs don't make a right so stop trying to point the finger at others. The question is do you condone this kind of money politics? If not, say so categorically.

If you believe your colleague has been unjustly dealt with, then say that and demand a fair and just process. That will earn you respect.

Stand by your friends based on principles, not by throwing dirt on others.

Dont Just Talk: How can honest and literate Malaysians trust PKR to head the government when the party leaders cannot agree among themselves.

Why is Azmin trying to usurp the prime minister’s post when he should be patiently waiting for his turn?

If the internal problems among PKR leaders are not resolved amicably, the result will be the implosion within Harapan parties.

This is something which Umno and PAS are looking forward to.

They have defied party orders and breached party rules. Better to chop off all these cancerous cells immediately to prevent it from spreading.

Anonymous 133971438080786: Until now the outcome of Azmin’s alleged sex video is still on hold as the analysis will come from foreign US experts.

This is what we call "selective" treatment because Azmin’s alleged sex video is being treated differently. Why take such a long time to obtain the results of the analysis. Are they hoping the public will forget?

Why don't Zuraida call for immediate action on the sex video?

MACC's admission of mistake did not alter facts in their letter, says PKR sec-gen

Anonymous_1543386425: "As a reform party which had been very sensitive on issues of power abuse and corruption, if we remain silent when an anti-corruption body sent a suggestion to our disciplinary committee to take action on those involved, then it means we condone such acts,” said PKR secretary-general Saifuddin Nasution.

Saifuddin, is this how PKR carry out the reforms promised to the rakyat? You ignore natural justice and the law? You are the complainant, the prosecutor and the judge? You need not hear the person who is accused?

If such are PKR's beliefs, then we rather Anwar does not be PM. Saifuddin, you are not fit to be a minister if you do not uphold the law.

PKR sacked these individuals but dare not sack Azmin. Why so selective? You take action against the weak but not the strong?

PKR has no principles, so please do not talk about how sensitive PKR is to corruption and reforms.

Anonymous_1543386425: MACC should commence an investigation as how this "mistake" could happen. Who signed the letter and who else received the letter?

Are the contents of the letter covered by Official Secrets Act (OSA) as Saifuddin claimed it is confidential? Who else in PKR besides the disciplinary committee members read the letter?

If the letter is covered by OSA, would you Saifuddin and the disciplinary committee members who acted on the contents of the letter be committing a crime?

MACC head Latheefa Koya should state whether the commission is taking any action or is it something to be dismissed as a minor mistake and no one is held accountable?

Can we have more transparency please, MACC?

The accused must be given a fair hearing to refute any allegation against him or her, and only after assessment of the pro and cons of the evidence judicially can a final determination be made.

PKR’s mission statement of upholding its principles can be thrown into garbage bin if it denies the right to be heard.