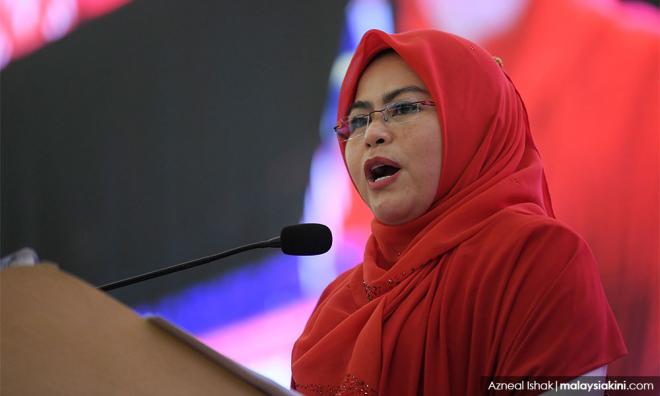 Yoursay: Noraini, where did a 'strong' Umno leave this country?

Anonymous_770241447347646: Umno Wanita chief Noraini Ahmad, you respect New Zealand Prime Minister Jacinda Ardern who was so successful in achieving so many goals in two years.

What did Umno achieve in all these years after Dr Mahathir Mohamad took over? Almost 40 years and instead of moving forward, we have moved backwards or stagnated.

Corruption in the 60s and 70s may run into thousands of ringgit, but after Mahathir took over, it went into millions. Abdul Najib Razak lifted the figure to billions. Will it be in the trillions if Umno returns to power?

In 60s and 70s we were on par with the world in our education system. After Mahathir took over, it started to go downhill, to the point where thousands of students are shunning national schools.

Today, the Education Ministry gets very excited with each upgrade in standing our colleges and universities attain. They should be embarrassed as by now our universities shouldn't be inching up from the bottom and should have been at a much higher position.

Our neighbour is years advanced in many areas. We started together - and God blessed this nation with much more resources - but where are we in comparison now? Even our other neighbours are catching up with us.

I could go on and on in this vein. So, Noraini, get your head out of the sand and face the truth. Forty years of Umno rule have failed the nation and its people.

You want to talk about the failings of Pakatan Harapan. They have just been in power for 19 months. Indeed, it will take years to clear all the dirt and rubbish your party left behind.

At least they are working in that direction. The only thing they need is a new leader for the present one is responsible for many of the mistakes made. Even now, we have no clue which direction he is going.

Malaysian-United: "The Wanita members stood up and welcomed the former Umno president passionately with cheers and applause. The emcee shouted loudly through microphone: ‘Malu apa?’ The members then shouted: ‘Bossku’."

It's ironic how the Wanita chief first praised the New Zealand prime minister for her wonderful leadership... then they gave a standing ovation to a leader who nearly bankrupted our country through corruption and unabashed kleptocracy.

Kita Anak Malaysia: You make a hue and cry about the ashes of a dead communist, but when the previous government signed countless lopsided agreements with China, for example, the East Coast Rail Link (ECRL), you all welcomed it with open arms.

When your leaders milked the coffers of 1MDB, Felda Global Ventures (FGV), Tabung Haji, Mara, etc, you accepted it, and still support your MaluApa boss and his cohorts. Where is your maruah (dignity)?

BTN: Umno will praise a foreigner, but will chastise fellow Malaysians of other races and political beliefs.

Their leaders say their Muafakat Nasional will lead to a more moderate Malaysia. Only an idiot will trust them. Once they are in power, they will be racist and extreme as they were, calling Malaysians of other races ‘pendatang’ (foreigners).

Look at the Umno MP who made fun of the Hindu holy ash.

Dummies Dhimmi: Why did BN lose the elections? How do you compare the BN government with New Zealand's? Can you admire your leaders in the same way? Do you have leaders who are comparable with the NZ prime minister?

I completely agree that Harapan is not doing good, but you lot as an alternative? Even the thought sends shivers down my spine.

Vgeorgemy: Noraini should know New Zealand PM Ardern didn’t inherit a nation that was looted, the public treasury emptied by the previous administration. Ardern doesn’t need to worry about how to pay debts incurred to cover systemic stealing.

Anonymous_f0124ca6: Ardern had a child out of wedlock and supports gay rights. I have no problem with that. Noraini sees Ardern as someone to look up to, so I hope Noraini will speak up for gays, unwed parents and minorities.

VW: The recent auditor-general's report regarding the irregularities in building housing for Felda should be distributed at the Umno assembly, so that they can gloat over how smart they were in stealing from poor Malays.

Muruga: What an example of rule of law. Switzerland’s highest court, the supreme court, has declared the Liberation Tigers of Tamil Eelam (LTTE) not a criminal group.

The police and the attorney-general must prove that the LTTE is a terrorist group and that it still exists as a threat before Sosma can be used.

Why are the police allegedly torturing for confessions? Are courts going to convict on forced confessions?

Bukit Aman Counter-Terrorism Division chief Ayob Khan Mydin Pitchay said there were lots of evidence of an imminent terrorist attack on an embassy. Where are the bombs or guns?

Enough of the charade. Release them now.

Flamescanner: Such tactics of mental torture are deplorable for a country that is supposedly trying to reform. Sad days indeed.

My heart goes out to these individuals and families who are forced to undergo the alleged torture.

Why do we need a week's prep time for a bail hearing? What happens in the meantime - back to the dark isolation cell?

I can only hope there are due process and recompense for each of them.

Anonymous_2679c6e5: Can the police clearly spell out what crime the accused are being investigated for. Is support for a cause a crime?

What about support for Islamic State (IS) and the other terrorist organisations? They are those who have been a part of these groups, done actual killings and yet have been released.