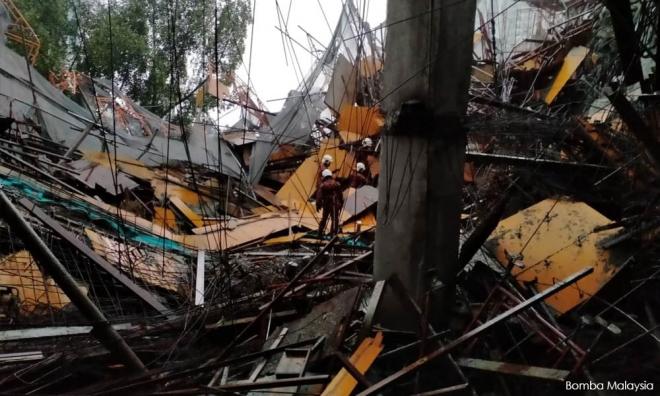 Two extricated from collapsed building, and 9 news from yesterday

1. Firefighters managed to extricate two victims after a condominium that was under construction in Taman Desa, Kuala Lumpur, collapsed.

2. Prime Minister Dr Mahathir Mohamad reiterated his commitment to leave office after the Asia-Pacific Economic Cooperation summit in November, and accused the media of trying to pit him against his designated successor Anwar Ibrahim.

3. A Subang Jaya Municipal Council enforcement officer and a middle-aged man involved in an altercation on Thursday have decided to bury the hatchet following mediation. The council also agrees to consider the matter settled.

4. Four more Covid-19 patients in Malaysia have made full recovery, bringing the total recovered patients to seven out of 19 cases of the disease. Singapore, meanwhile, warns of a possible recession due to the epidemic.

5. Mahathir expressed solidarity with China during a phone call to Chinese President Xi Jinping, while China reported 5,000 new Covid-19 cases and that six of its health workers had succumbed to the disease.

6. The political secretary to Sabah Deputy Chief Minister Christina Liew, Raymond Ahuar, has been fired after the aide made a visit to Sabah’s interior to look into local concerns.

7. Labour activist Abdul Aziz Ismail has urged the police to help recover RM2 billion allegedly collected from migrant workers by firms that failed to carry out a rehiring programme.

8. Water, Land and Natural Resources Minister Dr Xavier Jayakumar has objected to the proposed de-gazetting of 930 hectares in the Kuala Langat (North) Forest Reserve, which is home to Orang Asli settlements and wildlife.

9. Penang Water Supply Corporation warned that Kedah’s Muda Dam is at a critical level, and urgent action is needed to avoid water rationing in Kedah and Penang.

10. The Kuala Lumpur High Court has denied bail for DAP member V Suresh Kumar, who is facing terrorism charges over alleged links to the Liberation Tigers of Tamil Eelam.