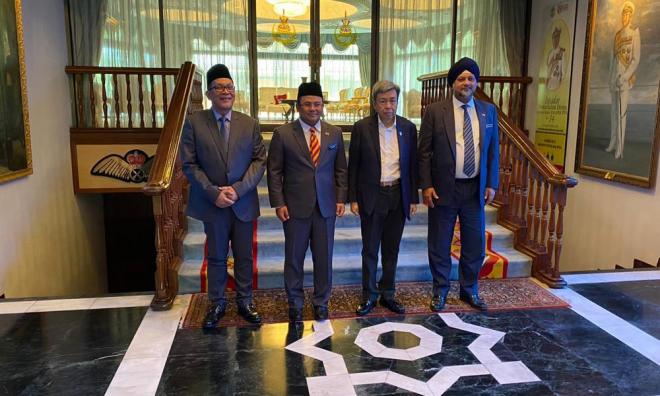 In a statement today, Amirudin said he was accompanied by Selangor DAP chief Gobind Singh Deo and Selangor Amanah chief Izham Hashim to the palace this morning.

"His highness was satisfied with our explanation that the current government wishes to continue its commitment towards realising the mandate given by Selangorians," he said.

However, Bersatu's role in the administration is unclear.

Amirudin's statement said he held a discussion with Abdul Rashid Asari regarding Selangor's direction but did not reveal if the latter would be joining the opposition.

Abdul Rashid (below) is Bersatu's sole member of the Selangor cabinet. Bersatu has five seats in the Selangor legislative assembly.

Even without Bersatu, the combination of PKR (21 seats), DAP (16) and Amanah (eight) will still be a supermajority in the legislative assembly. Umno has five seats while PAS has one.

The federal and Malacca government had collapsed yesterday following the withdrawal of Bersatu from the Pakatan Harapan coalition and the defection of 11 MPs from PKR. The Kedah, Perak and Johor government are also at risk of collapsing.

What is uncertain is whether some of the Selangor PKR state assemblypersons loyal to former PKR deputy president Azmin Ali would defect.

Among the most prominent Azmin follower in the backbench is Gombak Setia assemblyperson Hilman Idham.

There has been precedent before where Selangor retained their opponents on the federal level as part of the state government.

In 2015, when PAS quit Pakatan Rakyat due to a fight with DAP, Azmin as then-menteri besar retained exco members from the Islamist party in the state government, saying that it was to uphold the people's mandate in the 2013 general election.