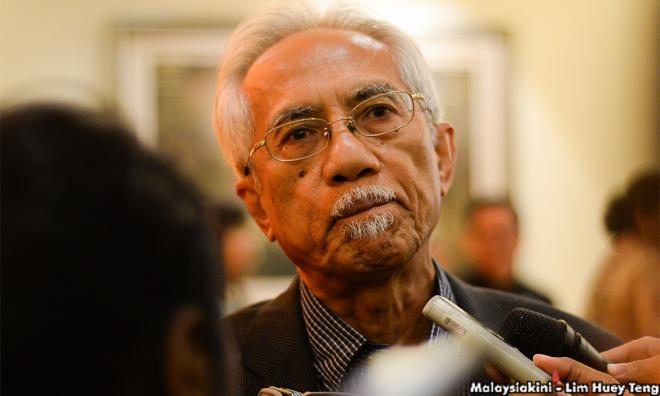 Whatever form of government interim Prime Minister Dr Mahathir Mohamad decides on, Bersatu supreme council member A Kadir Jasin ensures that it would have no room for the corrupt.

“The crooks, kleptocrats, the OKTs (those charged) and the generally corrupt are not welcome. This he made clear to his party (Bersatu) at the Sunday meeting.

“The rule of law, the high-profile trials and the reform agenda will continue,” added the veteran newsman in a blog posting this afternoon.

Kadir, who served as Mahathir's media and communications adviser until the latter's resignation yesterday, also appeared to lend credence to PKR and DAP's version of what led to the current political imbroglio.

He said the 94-year-old politician received an unplanned visit from Bersatu leaders at his private residence this morning to persuade him to retract his resignation as the party's chairperson.

“He (Mahathir) submitted his resignation because he felt that the majority of members of the party’s leadership council 'listened more to his political secretary than him',” he added.

Kadir, who did not name the political aide, said Mahathir was referring to the heated debate at the council's meeting on Sunday during which the future of Bersatu in Pakatan Harapan was discussed.

“At that meeting, he (Mahathir) explained the wide mandate the Harapan presidential council had given him at the meeting (on the transition of power issue) of Feb 21.

“He appealed to the MPT (Besatu leadership council) members not to force him to abandon his principle and renege on his promise (to hand over power to Anwar after the November Apec summit),” he added.

According to Kadir, the interim premier is not treating the appeal to rescind his resignation as Bersatu chairperson as an urgent matter since he has to deal with more pressing issues.

“These include managing the economy, steadying the capital market, continuing with the proposed economic stimulus package, consulting with top civil servants and meeting leaders of the main political parties.

“The last bit of the agenda will help him understand more clearly the extent of support most of them had expressed for him and, from there, to plot the next move.

“For instance, are they supporting him because they genuinely want him to continue to lead the country or because they don’t want their adversaries to win popular support to become prime minister?

“If the support in genuine and there’s no other contender, he can start forming a new government,” he added.

Kadir also commented on the speculation that Mahathir might form a unity government, which cuts across the political divide and even include outsiders.

“I remember the days and weeks after the 1969 general election (GE) and the riots that followed when national unity governments were formed in many states.

“This was expanded to the national level, leading to the formation of BN in 1973,” he added.