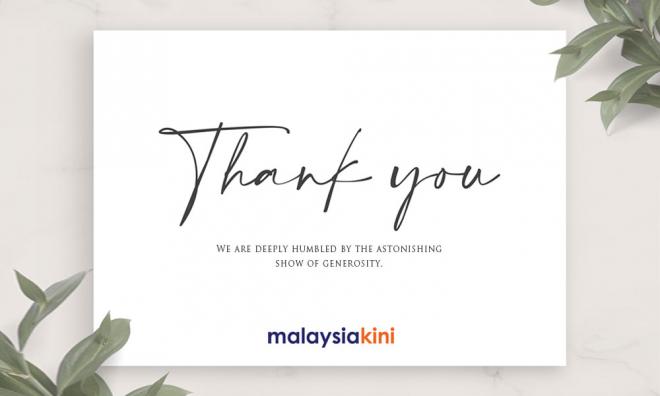 Malaysiakini has exceeded its RM500,000 fundraising target in under five hours.

The fundraiser was to help the news portal pay for a RM500,000 fine after the Federal Court found Malaysiakini liable for contemptuous comments by its readers.

Hence, the fundraising has been ended. All donations will be accounted for and Malaysiakini will be transparent.

Malaysiakini is still deliberating on where to channel the excess funds.

In an immediate reaction, the news portal's CEO Premesh Chandran thanked readers and the public for their support.

"We thank our readers and supporters for helping us out, even though I am sure many are having a difficult time themselves during this pandemic.

"It shows all that is right and wrong in this country. That the rakyat is willing to step up and do their bit to make their voices heard and make the country better, and contribute to righting the wrongs," he said.

He added that Malaysiakini will continue reporting without fear or favour, and will do its best to make sure the people's voices are heard.

"We in Malaysiakini are deeply humbled by the astonishing show of generosity by those who have contributed to our Legal Defence Fund.

"We don’t know how to repay your trust in us other than to continue to do our job the best way we can in an environment that is increasingly hostile to journalists in Malaysia," he said.

Gan said he was "shocked and dumbfounded" twice today - in the morning, by the astronomical fine; and in the afternoon, by those who contributed to the fund.

On June 16 last year, fresh from assuming the position of attorney-general, Idrus applied for contempt proceedings against Malaysiakini and Gan.

Idrus argued that the two respondents had scandalised the court by facilitating five readers' comments on an article dated June 9 titled “CJ orders all courts to be fully operational from July 1.”

The five comments, argued Idrus, "clearly meant that the judiciary committed wrongdoings, is involved in corruption, does not uphold justice, and compromised its integrity."

The comments, he said, threatened public confidence in the judiciary and were "clearly" aimed at tarnishing the administration of justice.

Malaysiakini's response to the court was that the prosecutors could not prove intent by the news organisation to publish the comments that scandalised the court.