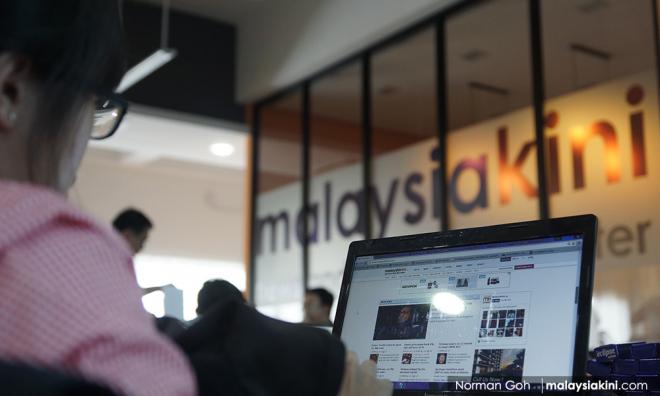 YOURSAY | ‘We are all Malaysiakini’

YOURSAY | ‘Many Malaysians are capable of doing the extraordinary when they see injustice.’

Vijay47: “Huge fine a body blow”, you say, Malaysiakini editor-in-chief Steven Gan. Indeed it is, a totally unexpected amount, especially when measured against what the prosecution itself demanded.

But I write to admire, salute, and support you, Gan. You took it on the chin like an anak jantan, you did not whine or cringe, and equally firmly you spoke your mind about what a fine of such proportions meant to freedom of the press and the right of the people’s will to be expressed and heard.

Fear to speak our sentiments will creep in and it will only serve to encourage the resident band of bandits to carry on their unfettered passion to loot and pillage, to offend and insult.

Perhaps the real tragedy is that Malaysiakini is being punished for what we the readers wrote in the comments section. Many of us, including me, choose to walk on thin ice, and this maybe a suitable occasion for us to remember that there are certain realms to be steered clear of.

Judicial decisions are still open to criticism, as you yourself so eloquently displayed this morning at the Palace of Justice, but there are limits to our disenchantment.

We cannot cast aspersions on the court’s integrity - that they are corrupt or guided by influences other than the law. This itself is often a line as thin as the ice we at times skate upon.

As someone said, “This comes with the territory.” So be it. Yet the fight must go on. Setbacks and challenges we will face, but we must persevere for the greater cause.

We too must take it on the chin.

2 Cents: Indeed, this is a testimony of the level of trust enjoyed by Malaysiakini from its stakeholders, especially the readers who believed and envisaged a better Malaysia through greater transparency and accountability.

Such level of trust was built from scratch through two decades of consistency in holding power to account.

This should serve as a reminder to those walking along the corridors of power that many like-minded Malaysians are capable of doing the extraordinary when they see injustice.

Apanakdikato: This is one Friday we will not forget, a Friday when Malaysiakini was punished beyond reason, and on the same day, rose with dignity with the unrelenting support of all fair-minded Malaysians.

Malaysians are owed an explanation why, even after humbly retracting all the allegedly offending readers' comments and offering an unreserved apology, though no fault of its own journalism, the powers-that-be chose to increase the fine by 2.5 times the amount sought by the new attorney-general, which was already excessive in itself.

Malaysians are owed an explanation why certain political figures who were charged with multiple counts of corruption and abuse of power, even more than 40 counts in a particular case, were hastily let off the hook.

It is clear that something rotten is happening in the justice and enforcement system in the country, yet there is no acknowledgement of this by those in authority, and no action taken.

Today, the strong response from fair-minded Malaysians in saving their right and freedom to responsible speech serves as a reminder to those in authority that the people want to see transparency and integrity in the government, and will continue to speak their minds when things are not going the right way.

The government of the day should learn to harness the minds of the people to make the country a better place for all instead of taking oppressive measures to silence their minds.

Kim Quek: The lightning response of the Malaysian public against the punishment of Malaysiakini augurs well for the country.

This also serves to forewarn the ruling elite that it better be prepared to pay a hefty price at the ballot box should it tramples on the democratic rights of the people.

The people will remain the boss, as long as our democratic system of one-man-one-vote remains.

That is why we must be ever vigilant not to allow our democracy to be stolen from us like the current unjustified declaration of emergency and suspension of parliament.

We must continue to oppose such dastardly assault to our democratic system until they are rectified.

Dr Raman Letchumanan: As I said earlier, whatever the court decision, Malaysiakini will come out stronger, as long as true justice is on our side. In this case, not only stronger, but press freedom has received the boost it sorely needed, against the forces that want to curtail freedom of speech.

The rakyat have spoken; it doesn't matter what the authorities decide. In the final analysis, it is the wishes of the rakyat that counts. I hope this is a lesson for the powers-that-be.

But let's not this overwhelming support get to our head. We need to be vigilant, not invite unnecessary attention, and always speak the truth to whoever it may be. There are other worse tools of suppression that authorities may use to curtail press freedom.

Cogito Ergo Sum: We will never allow an independent and neutral institution of democracy to go down. This crowdfunding result should send an equal and resounding message: the people will not be cowed.

We may be from diverse cultures but we stand together when democracy is being threatened. We are Malaysians.

Falcon: We are all Malaysiakini - period!

Kee Thuan Chye: Malaysiakini has given us so much.

It has stood up against persecution from the powers that be countless times for doing what it should rightly do - provide us information and the truth. It has, in the course of doing its work against the odds, changed the media landscape in Malaysia.

Now in its hour of need, the least we can do is help.

Fair Play: Malaysiakini subscribers must now acknowledge the fact that their future and Malaysiakini are intertwined.

Be careful and mindful of our language.

Thana55: Lord Denning MR, who in R vs Commissioner of Police (196) 2 QB 150, once said this about when his brethren on the bench would wield the sword of contempt:

"Let me say at once that we will never use this jurisdiction to uphold our own dignity. That must rest on surer foundations. Nor will we use it to suppress those who speak against us. We do not fear criticism, nor do we resent it. For there is something far more important at stake. It is no less than freedom of speech itself... All that we ask is that those who criticise us should remember that, from the nature of our duties, we cannot reply to their criticism. We cannot enter into public controversy. We must rely on our own conduct itself to be its own vindication."

Gerard Lourdesamy: The time has come for a comprehensive Contempt of Court Act to be enacted with reasonable and permissible exceptions for media and public comment. The obsolete common law contempt of scandalising the court needs to be abolished.

The time has also come for the creation of a Judicial Conduct Commission to investigate complaints against judges rather than the opaque mechanism that we have at present.

If the executive is answerable to Parliament for authority to govern and our MPs answer to the people every four or five years in general elections, what is so exceptional about the judiciary that they must be beyond public or media scrutiny and criticism?

This is the 21st century and not the age of absolutism.

Oriole: The majority and minority judgments are available in Malaysiakini. There is a distinct difference in tone, as seen in the choices of the words used in the two judgements.

If words relay state of mind, then there is a clear indication of state of mind in the judgments. Malaysians should read both judgments to arrive at their own conclusions.