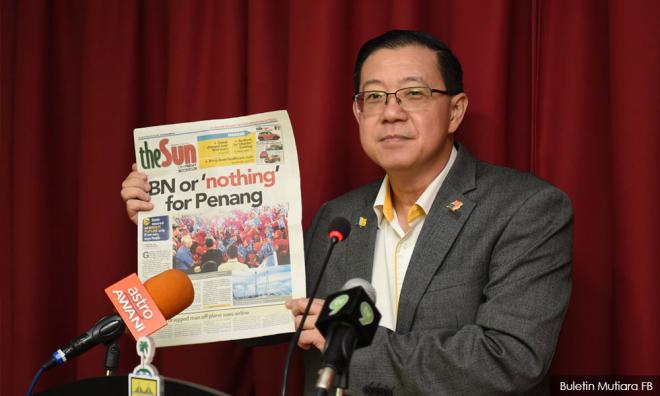 COMMENT | Penang is safely in opposition hands, with Pakatan Harapan expected to win a majority of parliamentary and state seats. This does not mean, however, that there are not political undercurrents that are shaping the results. In fact, many seats are competitive, including Permatang Pauh, Anwar Ibrahim’s traditional constituency where his daughter Nurul Izzah is contesting.

To understand why, given that the state is an opposition stronghold, it is necessary to look at a nexus of local and national issues.

Many middle-class Penangites, especially those on the island, are unhappy with the pace and mode of development in the state. Congestion and (over)construction have evoked strong reactions from those concerned with their impact on the environment and quality of life.

Critics contend that caretaker chief minister Lim Guan Eng’s development vision is not that different from that of BN’s - focused on ‘hard’ physical infrastructure rather than ‘soft’ human capacity enhancement. There are lingering concerns, for example, with the undersea tunnel, both its conception and financing.

This is compounded by a sense of dismissal of these concerns, with inadequate outreach to many in civil society who expect more engagement in governance. Lim’s government has evoked the ire of not only the local press, but many who are openly vested in bringing about better development for the state.

The BN opposition led by Gerakan’s Teng Chang Yeow is trying to capitalise on these resentments, with this ‘51 Unfulfilled Promises’. His confrontational approach has not gone down well, in part because the attacks on the DAP in Penang have been seen to be excessive.

Few can distinguish the local concerns from the broad demonisation of the party on the part of the BN government that has occurred since 2013. The genuine issues are overshadowed by the onslaught of attacks, most evident with the charges laid against the chief minister. Among ordinary voters, the trial of Lim has backfired, and in fact strengthened Lim as the opposition heads into the election.

Coupled with this is a sense of hypocrisy. Many of the concerns levelled locally by the BN in Penang echo similar issues raised with their own tenure at the state level. It does not help the BN that the attacks are being led by someone who was in the previous government, as this undermines their credibility. Perhaps even more striking is the comparison made between the charges Lim is facing and those that caretaker prime minister Najib Razak is not.

The BN in Penang is seen as weak, as both Gerakan and MCA are considered to be subservient to Umno. In fact, under the Najib government, these two Chinese component parties are perceived to be even weaker than in the past. Recall it was this subservience to Umno that contributed to the ouster of the Koh Tsu Koon government in 2008. Many Penangites will not vote for parties that cannot stand up on their own.

Electorally, the BN has effectively been led by Umno in the state, and given the changed demographics of the state - with Malays making up larger numbers than Chinese now - there are more demands for Umno to lead in Penang. For many, it is understood that a vote against Pakatan in Penang is a vote to bring Umno into power in the state. This time, however, should BN return to power, Umno would lead from the front, rather than from behind.

Another important underlying reason for the support among some Pakatan supporters is that Penang is the only state led by a non-Malay. It is the last bastion of Chinese Malaysian political power, which has been displaced within BN. There is long-standing resentment of this displacement – not only within Penang but across Malaysia. Penang has symbolic power, nationally and locally.

It is this symbolism that is equally resented in Malaysia’s racialised politics. Within the state and in Malaysia as a whole, Malay support for DAP has declined, especially since 2013. Despite the entrants of dynamic young Malay leaders such as Syerleena Abdul Rashid contesting in Seri Delima, the strategy to bring Malays into DAP ranks has not succeeded in translating into meaningful support among Malay voters. DAP is now more reliant than ever on its coalition partners for Malay support. At the same time, its partners have to face a backlash from some Malays for working with it.

This is playing out in many of the mainland Penang seats, where Malays are more concentrated. Nibong Tebal and Tasek Gelugor, for example, are competitive seats, as are a few of the state seats including Bukit Tengah, Seberang Jaya and Sungai Bakap. This sentiment also contributes to why Umno holds onto power in Balik Pulau, where there is a strong Umno incumbent. PKR is on the frontline of Malay anger against the DAP. Meanwhile, the strength of the alliance with Bersatu is being tested in Tasek Gelugor, with candidate Marzuki Yahya.

The erosion of Malay support is exacerbated by PAS seeking revenge in Penang - against the DAP for displacing and disrespecting the party in the state, and against PKR for working with DAP and choosing them as coalition partners at the national level.

PAS is comparatively weak in Penang, but it can shape the balance in Permatang Pauh in the state seat of Permatang Pasir, for example. It is also shaping the vulnerable contest of the Bukit Tengah state seat, where its demonisation of former Alor Setar MP Gooi Hsiao-Leung for questioning RUU355 is a continued PAS vendetta. PKR is further weakened by infighting, enhanced by the poorly-timed party purges, making the party more vulnerable than in the past.

Penang then and now

Penangites have a deep-seated belief in their role in shaping the future of their state and the nation. They take pride in being the pioneers of national development in the 1980s, and today they are pleased with the international recognition of the state has as a tourist attraction and vibrant manufacturing centre. Penangites have a global vision. They are sophisticated and hard working.

Many are post-modern in outlook, focused on the environment and ethical concerns. It is not a coincidence that Penang was the birthplace of the consumer movement and continues to have active watchdog organisations like Aliran. The political role the state plays in leadership is thus important. This is why, for most Penangites, they will vote opposition, holding the view that this is the more responsible vote for the future.

There will, however, be more strategic voting – split-voting at the parliamentary and national level - and potentially reduced majorities in some areas, tied to the weaknesses of the ruling coalition noted above, three-cornered fights and a desire to send the state government a signal to be more responsive to legitimate criticism.

Penang will send a message about how power should be practised and the place Malaysia wants to be moving forward.

BRIDGET WELSH is an Associate Professor of Political Science at John Cabot University in Rome. She also continues to be a Senior Associate Research Fellow at National Taiwan University's Center for East Asia Democratic Studies and The Habibie Center, as well as a University Fellow of Charles Darwin University. Her latest book (with Greg Lopez) is entitled ‘Regime Resilience in Malaysia and Singapore’. She is following the 2018 campaign on the ground and providing her analyses exclusively to Malaysiakini readers. She can be reached at [email protected]