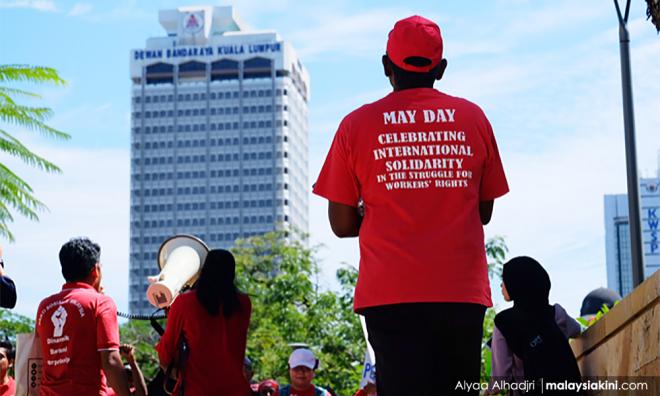 COMMENT | Today is May Day, or Workers’ Day, which commemorates the historic struggles and gains made by workers and the labour movement. Traditionally, the movement observes the day with a rally with sometimes fiery speeches demanding reforms in the labour sector.

But for the past few months, Malaysians have had little to observe or celebrate. Continuous action by the authorities has directly or indirectly impeded our rights and personal freedom. Notwithstanding the problems faced with Covid-19, there’s nothing to observe but to watch in horror as the country slides down aimlessly and dangerously to the abyss.

There is little respite from an authoritarian regime that is not answerable to its citizens. Under the guise of the emergency, there’s no accountability, no check-and-balance, zilch. To put it accurately, it has been distressing.

Satire and wit have become dirty words and even commenting on issues of concern has been seen as a crime. The disparity in the dispensation of justice has gone somewhat haywire. It’s not the judiciary but the "little Napoleons" who have been given discretionary power albeit with no training or understanding of the law. To put it crudely, carpenters have been asked to carry out brain surgeries.

There seems to be a wide gap between the haves and the have-nots; the rich and the poor; the titled and the ordinary man. For the latter, justice is dispensed with instantaneous on-the-spot fines hefty but when it comes to the others, the process is different. Investigations have to be carried out, statements have to be recorded and investigation papers drawn up.

The police chief has asked those who have received hefty fines to appeal but where is the compassion and discretion? Can’t we treat others with empathy and consideration?

A minister who breaks the law gets a slap on a wrist; a millionaire is made to pay a paltry fine compared to her wealth while ordinary hawkers are slapped with heavy fines. A case of different strokes for different folks?

Rape has become a joke in the classroom and we have to wonder how many of them can be considered teachers. But there is a silver lining – a brave young girl stood up and offered a voice for the students.

Instead of applauding her, some narrow-minded citizens are spewing hatred and loathing on social media. Doesn’t she need protection?

Some are appeared to have been given a carte blanche to insult ...