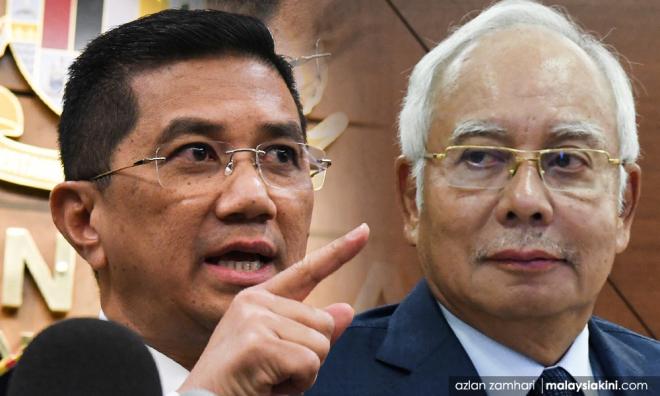 PARLIAMENT | Economic Affairs Minister Mohamad Azmin Ali today ripped Najib Abdul Razak (BN-Pekan), the former prime minister, for claiming that Felda would be able to recoup the US$505.4 million (RM2.07 billion) it paid to Rajawali Capital International if it exercised a "put option".

Felda had spent US$505.4 million to buy a 37 percent stake in Indonesia's Eagle High Plantations even though they were only worth US$115.2 million on the open market when the decision was made in December 2015.

Najib had previously defended the deal, stating that the put option meant that Felda can regain its full investment, on top of a return of six percent per annum.

However, Azmin pointed out that Felda has exercised the put option, but is facing a hard time regaining the US$505.4 million as Rajawali was now fighting the move.

"Early this year, Felda issued a notice to Eagle High to exercise the (put) option. What happened? They fought it and refused (to comply).

"This proves that Pekan's assumption that Felda can get back its US$505.4 million at any time by exercising the put option is another lie to the people and Felda settlers," said Azmin in the Dewan Rakyat today.

Furthermore, Azmin said Rajawali may not have the capability to repay the sum, pointing out that it only had nett tangible assets worth only US$7.2 million as of 2014.

"If the nett tangible assets of Rajawali in 2014 were only US$7.2 million, how is it going to repurchase Eagle High from Felda for US$505.4 million?" he asked.

With Najib absent, Azmin took aim at Ahmad Maslan (BN-Pontian) and demanded answers from him.

"Why am I being targeted? This is for Pekan to respond," Ahmad answered.

"What can I do if he does not come to the House? He is not man enough to face Gombak (Azmin's constituency) in Parliament," Azmin countered.

In a Facebook post later, Najib said that he could not attend today's Dewan Rakyat sitting as he had to have discussions with his lawyers.

"The Pakatan Harapan government has charged me so many times with all sorts of things that I have to go to court almost every day," he wrote.

Yesterday, Najib shared parts of the Felda White Paper before its tabling in the Dewan Rakyat today, highlighting the acknowledgement of the put option.

"With the put option, if we do not wish to proceed with the investment, we can reclaim all our money, including interest of six percent per annum.

"It does not matter how much the share price is worth because our profit is guaranteed.

"Therefore, the rakyat's money is safeguarded and we will not suffer losses - this also proves that Harapan's claim that Felda suffered losses from buying into Eagle High is slander," he said.

The White Paper had also criticised Felda for not conducting a credit risk evaluation on Rajawali, which it referred to as "Company A1", to ensure that it was able to repay Felda if the put option was exercised.

"There is no evidence to show that the management and Felda board had conducted due diligence or credit evaluation for 2016 on Company A1 to ensure that Company A1 was capable of returning the value of the investment through the put option," it said.

Rajawali is linked to Indonesian tycoon Peter Sondakh, said to be a close associate of Najib.

According to the Felda White Paper tabled in the Dewan Rakyat today, the put option allows Felda to redeem the full investment, plus a return of six percent per annum in the fifth year.

The deal was signed on Dec 26, 2016, meaning that it has been less than three years.

However, the White Paper said Felda can still trigger an early put option if Eagle High fails to comply with its obligations under the Roundtable on Sustainable Oil Palm (RSPO) certification, fails to get its RSPO certification within two years, commits a material breach or is involved in judicial proceedings relating to liquidation, insolvency, composition or reorganisation.

To date, Eagle High has yet to secure its RSPO certification.