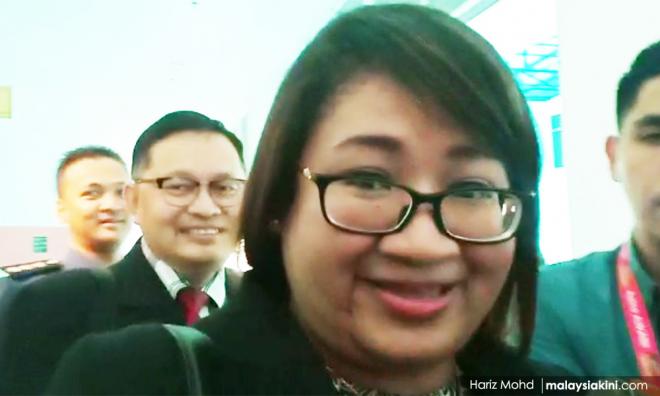 Lawyer in Adib case pulls out, and 9 other things that happened yesterday

1. Lawyer Syazlin Mansor (photo, above) abruptly pulled out from representing the Housing and Local Government Ministry as well as the Fire and Rescue Department in the inquest into firefighter Muhammad Adib Mohd Kassim’s death, potentially nullifying the testimony of one expert witness.

2. Housing and Local Government Minister Zuraida Kamaruddin said Syazlin’s role in the inquest is redundant because her ministry is already represented by the Attorney-General’s Chambers in the inquest.

3. In the spirit of its Reformasi roots, PKR decided not to nominate or endorse political candidates for various state titles, though its members may choose for themselves whether to accept such titles if they are offered one.

4. Terengganu Sultanah Nur Zahirah applied for the courts to dispose of her defamation suit against Sarawak Report editor Clare Rewcastle-Brown without going for a full trial.

5. Attorney-General Tommy Thomas has denied viral messages claiming that he advised Prime Minister Dr Mahahtir Mohamad and the Council of Eminent Persons that there is no solid proof to convict former prime minister Najib Abdul Razak on 1MDB-related charges.

6. An organising committee member for a PKR Ramadan event that has courted controversy denied that the function was inappropriate for the holy month and said facts about the event were“twisted”.

7. The Centre to Combat Corruption and Cronyism (C4) and Suaram clarified that former defence analyst Abdul Razak Baginda still has two charges against him in French courts, after one indictment had been dropped.

8. After receiving a deluge of complaints about billing issues, Tenaga Nasional Bhd urged customers to come to their customer service centres to have those issues sorted out on a case-by-case basis.

9. The federal government has written off debts amounting to RM3.8 billion that had been lent to state governments to develop rural water supply.