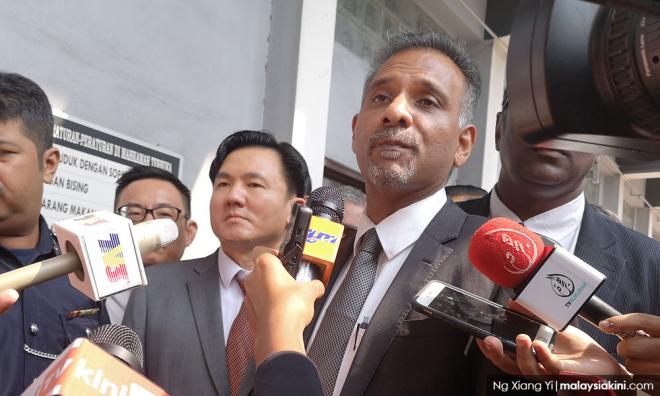 Lawyer Ramkarpal Singh (photo above, right) said the police report lodged by Ngeh yesterday contained serious allegations and must be investigated because of its impact on his client.

"It has to be investigated fully. That allegation was made only last night. It would have been impossible for the AG to investigate the allegation before (Yong was charged) this morning.

"That is why we initially urged the DPP (deputy public prosecutor) to be magnanimous in not pursuing the charge today in view of the allegations made last night," he said.

Yesterday, Ngeh lodged a police report claiming that the individual who accompanied the rape accuser to the police station had received a cash payment of up to RM100,000 and was coerced into aiding the accuser.

Ngeh, who is also the Perak DAP advisor, also urged the police to investigate a possible hidden agenda against Yong.

The DPPs did not accept Yong's request to postpone the charge because they were under instructions to proceed under any circumstances.

Ramkarpal said Yong's legal team have no problems defending their client because they believe the charge is baseless.

"It is quite obvious that the allegations of RM100,000 payment have not been investigated at all.

"We hope it is investigated thoroughly. If it is found that there is basis (to the claim), then the charge against Yong should be withdrawn," he said.