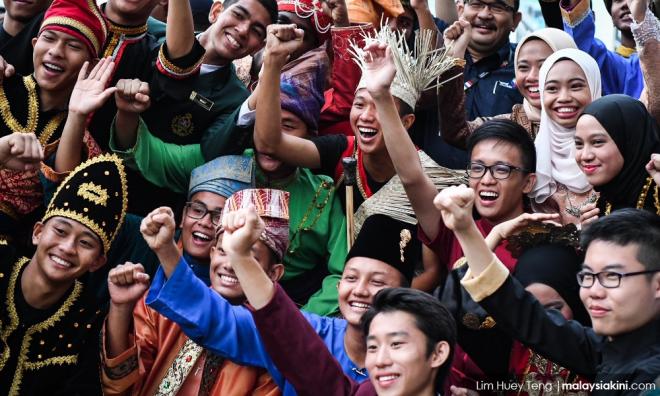 Institute of Ethnic Studies (Kita) director Professor Shamsul Amri Baharuddin once asked his students to list 10 things related to the Indian community and he was shocked when tosai (thin pancake made of rice and lentil batter) came out tops.

"They couldn't think of anything other than a food item. This cannot be taken lightly as it is a clear indication of how shallow their understanding of another community is," Shamsul said during a discourse titled "Malaysia After 62 Years of Merdeka", organised by newspapers Sin Chew Daily and Sinar Harian recently.

The event took place at Sin Chew Daily's headquarters in Petaling Jaya and was attended by about 80 people.

"Well, I can ask the people in this hall how much they know of the culture and sensitivities of other communities, but I bet not many can answer that," Shamsul said.

He noted that most people's perception of another community's culture is based on what they see with their eyes, and that is at a superficial level.

"For example, if asked what is the difference between Deepavali, which is celebrated by Hindus, and Baisakhi, as celebrated by the Sikhs, not many (non-Indians) can give the answer.

"These festivals are celebrated by Indians who profess different religions. The Hindus worship in a temple while the Sikhs pray at a gurdwara. So, there is more to Indians than just tosai."

A good 62 years have passed since this nation attained independence, which is long enough for the people of diverse ethnicities to get to know one another well. The reality, however, suggests otherwise.

According to Shamsul (photo), who is also chairperson of the National Council of Professors, the lack of understanding of the cultures and sensitivities of other races can cause misunderstandings and prejudices against others.

"When we don't know something well enough, it's easy for us to believe the stories we hear in coffee shops or on social media, most of which are about trivial matters. But when a (trivial) matter is exaggerated, it can threaten interracial harmony."

Shamsul said it appeared to him that society, particularly today's younger generation, has not been fully exposed to the cultures and sensitivities of other ethnic communities.

Recalling his childhood, he said he was raised in a kampung in Jempol, Negeri Sembilan, and studied at the nearby St Aidan Primary School in Bahau, which was located close to a rubber estate.

There were many Indian and Chinese pupils in that school, many of whom became his close friends.

"I also remember that the first movie I watched was a Tamil film whose title I can't remember but the lead stars were MG Ramachandran and Sivaji Ganesan. The movie was screened outdoors on a football field at night... I watched it with my Chinese and Indian friends, whilst munching chickpeas and muruku. The atmosphere was so lively.

"I was brought up in such circumstances where I had the chance to learn about other people's culture. My (multiracial) friends and I not only interacted at school but also outside," he added.

Pointing to the importance of educating Malaysians about ethnic relations from a young age, Shamsul said it was with this in mind that he helped to introduce a module and course on ethnic relations to enable the people to get to know one another better.

"But it (the course) was only (available) at the university level. How about at the kindergarten, primary and secondary school levels? Currently, there are topics in schools that address this issue, but not in an in-depth manner.

"In this respect, we can't expect only parents to play a role (in educating their children about other races) for fear that they may tell their children some things that may cause misunderstandings among the younger generation," he added.

Quoting the Malay proverb tak kenal maka tak cinta (one can only learn to love a person after getting to know him/her), Shamsul said only by grasping the culture and sensitivities of other races can one be driven to appreciate others and move towards unity.

The 2018 National Unity Index - which was based on a survey carried out over 18 months involving 5, 275 respondents who answered a questionnaire and 7,226 respondents met during dialogues - found that Malaysia has yet to attain unity in the context of its racial and cultural diversity, although it has been independent for 62 years.

"Of course, Malaysians are united to a certain extent, otherwise we would be facing all kinds of conflicts, big and small. So, what has Malaysia achieved?

"What we have achieved now is integration, which is part of efforts towards attaining our long-coveted goal of unity. In other words, integration is a prerequisite for attaining unity," he explained.

Stressing that unity can only be achieved once the people have reached a consensus on most economic and social issues, Shamsul said currently, Malaysians have the tendency to agree on some things but disagree on other matters.

"There are fluctuations in our relationships. Sometimes we are angry, sometimes it is the other way around. Whatever it is, the wonderful thing about Malaysians is that even though we argue with one another, we don't resort to violence.

"Violence is not an option. That is the strength of Malaysians who can quarrel when necessary and unite if the need arises. They are mature and can resolve issues through negotiations," he said.

Former MCA president Ong Tee Keat, who also spoke during the discourse, said some Malaysians were still trapped in their zero-sum mentality, whereby they envy what other races have attained and fear that their own rights would be eroded.

This, Ong (photo) added, would never happen because the Federal Constitution protects the interests of all communities in Malaysia.

Urging Malaysians to discard unhealthy mindsets, he said they should, in moving forward, focus on things that can lead to solidarity among the people.

"We should be looking into issues that are more complicated and challenging, like (improving) our country's competitiveness (on the international stage) and not argue about trivial issues.

"We seem to be passionate about competing with other races but we don't dare to compete at the international level," Ong added.

MIC vice-president C Sivarraajh said parents play an important role in inculcating the spirit of muhibah and unity in their children.

"They (parents) shouldn't be telling their children not to befriend Indians because they are gangsters and so on. It gives them (the children) the wrong impression of a particular race.

"We must accept the fact that we have lived together in Malaysia for more than 62 years. All these years, we've weathered many challenges together, so let's not gamble away the peace and harmony that we've been enjoying, just because of a trivial issue or two," Sivarraajh added.