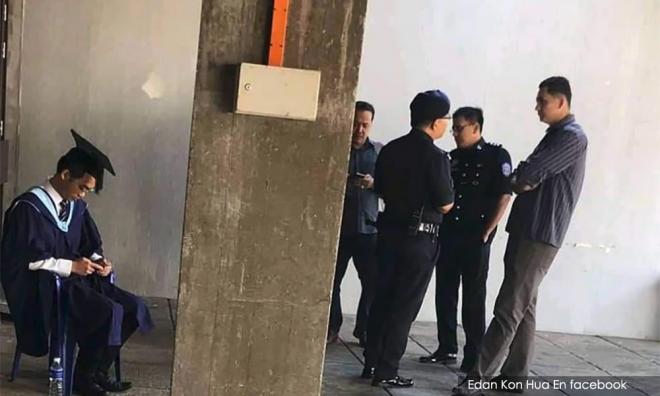 Universiti Malaya (UM) is standing by its decision to bar student activist Edan Kon Hua En from attending his graduation ceremony, claiming the latter had intended to disrupt proceedings with a protest against the varsity’s vice-chancellor.

UM claimed prior to yesterday’s incident, which took place before the start of the university’s seventh convocation session, Kon had attempted to “incite” other graduates to join in his protest.

“Based on preliminary investigations conducted by the university, the graduate was found to have used his Facebook account to incite other UM graduates to participate in his efforts to compel the vice-chancellor (Abdul Rahim Hashim) to resign.

“We feared that not only would efforts, in the form of incitement by playing up the racial agenda, potentially threaten the safety of the vice-chancellor, but more than that, threaten the peace and public order especially at UM,” the university said in a statement today.

This is believed to be in reference to a Facebook post by Kon on Oct 12 in which he “called upon graduates from UM to participate in the #TolakRasis #UndurVC campaign during the upcoming convocation session”.

Safety checks by the auxiliary police also purportedly uncovered a folded placard being carried by Kon on which were allegedly written “provocative” words.

UM said: “The discovery showed the graduate was intending to disrupt the convocation ceremony set to take place.”

It decided to then bar Kon from attending the proceedings in order to maintain the smooth running of the ceremony in the interest of attending parents, academics, and other graduates.

Even so, UM asserted it was dedicated to the principle of freedom of speech, but maintained it must be practiced at the right time and place.

Kon, a graduate of the business and accountancy faculty, said yesterday that his placard was confiscated and that he was denied entry into the hall despite assuring he would not stage any protest.

In a separate Facebook post yesterday, Kon accused UM of assuming he was “guilty until proven innocent”.

“...This means the university meted out the punishment before proving my guilt and denying me my right to attend the graduation ceremony,” he wrote.

He questioned the close watch being kept on him in comparison to the lack of attention given to another protest against fellow student activist Wong Yan Ke.

The protest against Wong was taking place at the same time outside the Dewan Tun Canselor, where the convocation was being held.

“While quarantined, I was not only surrounded by auxiliary police, but also officers from police Special Branch...I was like a prisoner being closely monitored.

“Auxiliary police chose to quarantine me although I had yet to do anything, but let the demonstration happening outside be,” he further claimed.

“I believe smart people will know that the restriction upon my entry to my graduation was unfounded.

“By preventing me from entering the ceremony, forbidding me and quarantining me to restrict my movements, and not responding to my request (to meet), the (UM) management is clearly scared of opposing voices,” he further posted.

The incident took place a day after the brouhaha involving Wong, who, immediately after receiving his graduation ceremony, unfurled a banner accusing Rahim of racism and called for the latter's resignation.

UM has since lodged a police report against Wong.

Both incidents are in relation to alleged racist elements in Abdul Rahim’s speech during the Malay Dignity Congress rally on Oct 6.

The vice-chancellor allegedly claimed the change in government after GE14 had eliminated Malay political dominance and asserted that Malay privileges were being questioned.

He allegedly also warned others not to challenge the social contract.