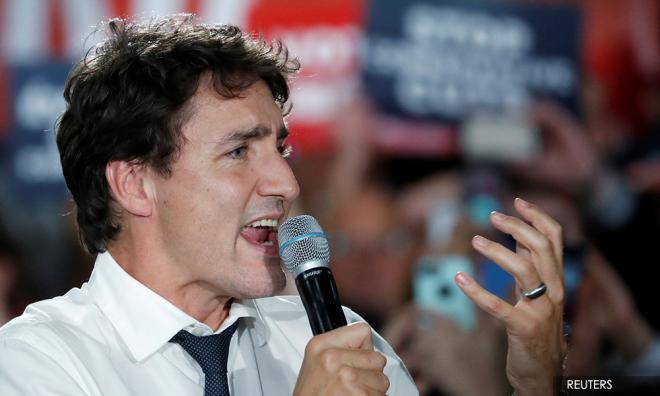 Canadian Prime Minister Justin Trudeau, hit by scandals and locked in a near dead-heat ahead of today’s election, has put away his teleprompter and taken his campaign on the offensive.

A day ahead of a federal election that looked as though it could spell the end for one of the world’s last remaining progressive leaders, Trudeau's (photo) team is seeing signs of hope.

Surveys of public opinion still indicate that Trudeau will lose his majority in Parliament and be forced to rely on the support of smaller parties.

But talk of an outright loss to the main opposition Conservative Party of Andrew Scheer is fading and a weekend of bad headlines for the Conservatives has energised Liberal aides.

The Globe and Mail reported Scheer’s team had hired a company to “seek and destroy” the campaign of the People’s Party of Canada (PPC), a new splinter movement that threatens to split the Conservative vote. The PPC is threatening legal action and accused the party of “dirty politics”.

Two senior aides on Trudeau’s plane even said it might still be possible to win a majority of the 338 seats in the House of Commons, which is unlikely if opinion polls and the Liberals own forecasts are accurate.

The party’s current slim majority of seven is expected to be wiped out by losses in Quebec, Atlantic Canada and the West, according to the party’s internal projections, and the prospects for making up the difference are unclear.

The mood though is much more upbeat than in the days after photos emerged on Sept 18 of Trudeau in blackface at an Arabian Nights-themed party in 2001 when he was a 29-year-old teacher. More images emerged the next day from the 1990s.

Some campaign aides were deeply unhappy, two sources said and felt obliged to have uncomfortable conversations with their young children about racism for the first time. The malaise spread to the tour in the days afterwards and Trudeau, who repeatedly apologised for the images, gave flat performances to subdued supporters.

Last Thursday on a cold wet evening in Montreal, the atmosphere was very different. Two legislators and Trudeau’s wife Sophie whipped up the crowd before the Liberal leader appeared and spoke freely, for the first time ditching his electronic aides.

The next night, on the outskirts of Toronto, Trudeau told a rally that his father – former Liberal Prime Minister Pierre Trudeau - had been born 100 years ago that day, Oct 18 and that he had been a fighter.

His father, Trudeau said, would not have worried about encountering rough weather while paddling a canoe because his approach was to “sing louder and paddle harder”.

“He ditched the teleprompter because he wants to talk more directly to people,” said one aide.

Trudeau also made other changes. Dozy days that saw the 47-year-old leader do one or two events are gone, replaced by a last-week frenzy.

In the last 10 days of the campaign, Trudeau’s campaign started visiting parliamentary constituencies held by opposition legislators, signalling that he was on the attack.

He put in a 21-hour day on Friday, making four stops in Ontario before flying two hours west for an event in Winnipeg, Manitoba. Trudeau engaged in good-natured banter with supporters, urging them to boo whenever he brought up the name of Conservative leader Scheer.

Liberal voter Heather Stanus said she was not bothered by the blackface incident since “everyone has things in their past they wish they had done differently”.

But she added there were still some undecided voters who could opt for minority parties that compete with the Liberals for the left-leaning vote. This is one potential problem for the Liberals and a second is a low turnout, which tends to favour the Conservatives, who have a more committed base.

“There are so many seats that are still toss-ups, especially in Quebec and Ontario,” said Darrell Bricker, chief executive of pollster Ipsos Public Affairs. “We also know that about 10 percent of voters make up their mind in the voting booth.”