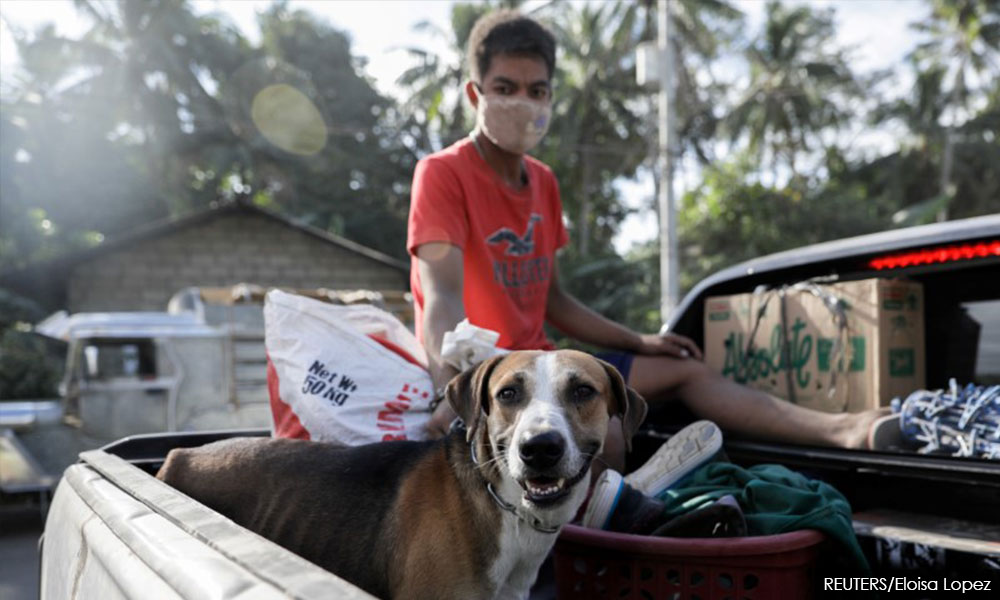 Thousands of residents under orders to evacuate from a town near the Philippine volcano Taal were allowed to briefly visit homes today to rescue their animals and recover some possessions, taking advantage of what appeared to be waning activity.

Daniel Reyes, mayor of the Agoncillo town inside the danger zone of the 311-metre volcano, said he allowed around 3,000 residents to check their properties and retrieve animals, clothes and other possessions.

“If I would not let them rescue their animals, their animals would die and together with them their sources of livelihood,” Reyes told Reuters.

“Our bodies are fine, but our minds and hearts are in pain,” said resident Peding Dawis, 63, while resting after taking his cows to safer areas.

“It’s hard to leave our homes and livelihood behind.”

More than 40,000 residents of Agoncillo have abandoned their homes since Taal, one of the Philippines’ most active and deadliest volcanoes, began spewing massive clouds of ash, steam and gas on Sunday, Reyes said.

The majority of residents are now staying with families elsewhere, but the rest are among a total of 66,000 people sheltering in evacuation centres.

Taal has shown signs of calm since yesterday and Reyes said he took advantage of this window to allow residents to collect their belongings.

“Based on what I saw outside, I thought I would be doing them more good if I let them return to their homes,” Reyes said. “The help they are getting now is only momentarily.”

The Philippine Institute of Volcanology and Seismology (Phivolcs) said it observed “steady steam emission and infrequent weak explosions” from the volcano’s main crater, but it continued to record dozens of earthquakes in nearby towns.

The institute said today the danger level posed by the volcano remained at four out of a possible five, meaning “hazardous explosive eruption is possible within hours to days”.

“We do not base the alert level simply on what we see on the surface. We have to try to interpret what is happening below,” Renato Solidum, Phivolcs’ chief, told CNN.

“There are sometimes waning activity but the activity below is continuing.”

The impact of the volcano on the US$330 billion (RM1.3 trillion) national economy has been a blip, despite cancelled flights and a day of work lost on Sunday because of a heavy ashfall in the capital Manila, 70km away.

But for some of the farmers growing pineapples, bananas and coffee nearby it has been a disaster.

Volcanic ash has caused an estimated 3.06 billion pesos (RM244 million) worth of damage to crops, livestock and fish farms, based on the latest data from the Agriculture Department.

Although Taal is one of the world’s smallest active volcanoes, it can be deadly. An eruption killed more than 1,300 people in 1911. — Reuters