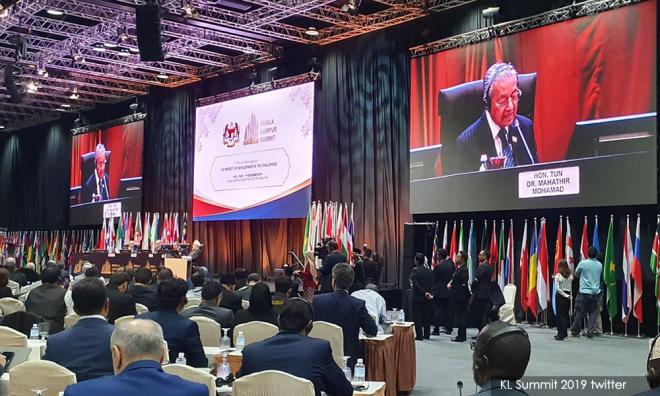 LETTER | It has become a political norm of Prime Minister Dr Mahathir Mohamad to project himself as a great spokesperson for the Muslim world.

The latest Kuala Lumpur Summit that has brought Muslim leaders from Turkey, Iran and Qatar is an effort to project a world view of communal ideology to the Muslim world as perceived in his own country where issues are conceptualised as a conflict between Muslims and non-Muslims.

When one analyses Mahathir’s speech and solutions that have been put forward in the summit, it tends to create a dichotomy between Muslim and non-Muslim nations, even though there seems to be good intention to resolve issues facing the Muslim ummah (community).

What is far more hypocritical is the invitation to the Iranian leader, who is a Syiah, while his brothers of the common sect are not accepted in Malaysia’s religious discourse.

The question that comes to mind is whether Muslim countries alone are suffering from oppression. What about countries like Nicaragua, Cuba, Venezuela and Bolivia, which are also victims of the US dollar and hegemony?

What makes these Latin American countries distinct and credible in their struggles is they are able to collectively project the opposition to US imperialism, without ethnocentric ideology that tends to divide communities according to race and religion.

The fundamental ills that are affecting Muslim nations around the world, and especially in Malaysia, are their obsession with religious-inspired identity ideology, and this creates conditions for Islamic phobia. Mixing religion and politics in the quest for power places religion in a vulnerable situation, where counter views are expressed and this is quickly regarded as Islamophobia.

Islamophobia is not merely a historical reality, it has a present shape that is much rooted in the inability of Muslim political and religious elites to separate religion and politics.

The Christian world learnt it early, through the centuries of reformation that questioned the abuse of power by clerics and this paved the way for their progress.

The countries of the East, like China, Japan and Korea, have suffered war and violence but they have moved ahead due to their lack of obsession with identity. These nations were open to the world of ideas from all sources, besides hard work that created an identity that attracts. It’s not about slogans, it is about action that attracts.

It would have been wise for Mahathir to have also invited non-Muslim countries that are also going through oppression, and to collectively chart a humanistic and ethical economic alternative that would challenge US hegemony.

This would have been far more progressive than trying to get Muslim nations to adhere to a kind of distorted communal world view as projected by him and communal Muslim politicians in Malaysia.

RONALD BENJAMIN is the Secretary of the Ipoh-based Association for Community and Dialogue.