5.25PM: Muhyiddin tells reporters that a secretariat will be formed to discuss plans to seek the removal of Najib.

He says the secretariat will be led by Muhkriz.

Asked if they have any actual plans, he admits they don't have any at the moment.

"Ya (no actual plan), but basically we will have to go and see," he says.

5.20PM: Rafizi says PKR president Wan Azizah is not present as a safety precaution, in case Pakatan Harapan wants to get out of the pact signed today.

"It's a safety valve," he says, adding that all Harapan members who signed the pact are still bound by any decision made by the opposition coalition's presidential council.

5.10PM: Azmin refuses to entertain a group which came to the venue with a poster bearing Mahathir’s image with the words ‘Harapan Kami, Ketua Umum PKR’ (Our hope, PKR de facto leader).

The group claims to be made up of PKR grassroots members.

4.52PM: Mahathir says there is no leadership for the core group.

On whether Najib will be given an ultimatum, he says: "We'll think about it."

He pauses and then adds: "Najib should leave now."

Mahathir also chides the suggestion on whether a street protest will be organised against Najib.

Kit Siang then challenges the media to also take up the fight against Najib.

The press conference ends, with some leaders shouting "Reformasi".

4.50pm: Muhyiddin tells reporters that although he is still an Umno member, he is attending the event in his personal capacity.

“I am a Malaysian citizen. I have the right to voice out and fully support what Tun (Mahathir) has mentioned,” he says.

4.45PM: Mahathir rubbishes a question on how he will be able to convince those who are against DAP to support the anti-Najib campaign.

"This shows that we are still thinking about parties. We are citizens of Malaysia," he says.

Ambiga says releasing Anwar and others who are wrongfully jailed must be on the group's agenda.

Maria Chin adds that Najib has been given too many chances to fix the rot affecting the country.

"That's why he needs to be removed," she says.

She also reiterates that institutional reforms are vital to the agenda.

Asked if setting aside differences means also setting aside Mahathir’s alleged undermining of the institutions, Maria replies that implementing reforms mean correcting the mistakes of the past.

4.35PM: Mahathir says one of the ways Najib can be removed is through a vote of no confidence.

However, he says this requires Umno leaders to be brave to vote against Najib.

Asked who will become the next PM, he says that is a question for a later time.

He also brushes aside questions on whether he will take this fight to Sarawak.

"What they do in Sarawak is their business," he says, reiterating that Najib must be removed.

On the need for more Umno support, Mahathir replies that those who continue to support Najib are in danger of having legal action taken against them.

Mahathir says the fight against Najib has nothing to do with Umno.

He then deflects a question on whether he will campaign for Anwar Ibrahim's freedom.

"We are concerned about removing Najib," he replies.

Asked if he trusts the opposition, Mahathir says that doesn't matter.

"What's important is that we are citizens of Malaysia," he says 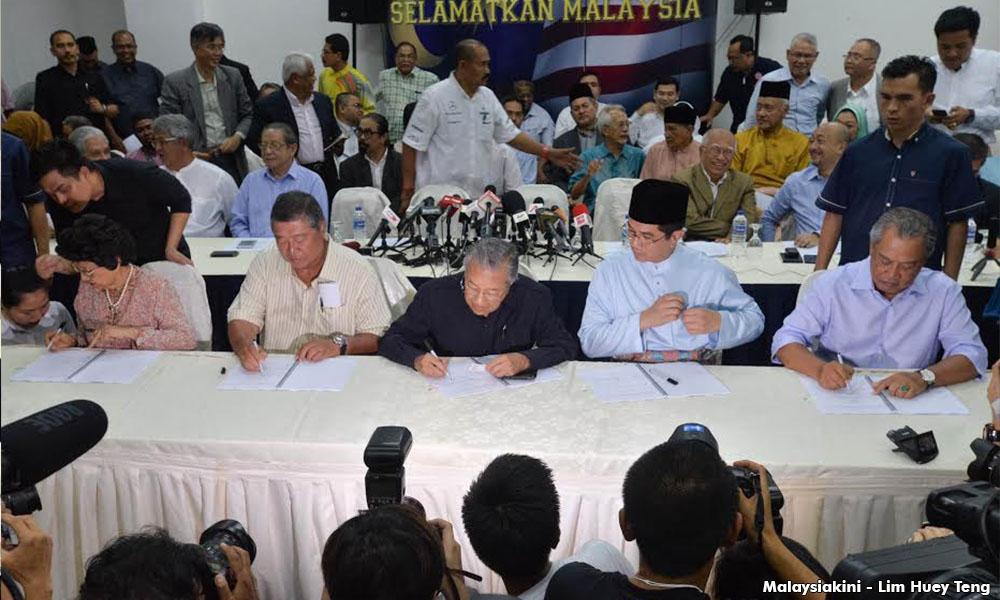 4.05PM: Mahathir is the first to sign the declaration , followed by his wife, Muhyiddin, Ling and Azmin. Following them, the rest are expected to ink the document.

4.00PM: Besides 1MDB, other concerns in the declaration are lack of freedom of speech, harassment of the media and whistleblowers, as well as Putrajaya's decision to sign the Trans-Pacific Partnership Agreement.

The main demands are:

3.55PM: Syed Saddiq says there will be a total of 58 signatories for the declaration.

3.50PM: Mahathir continues to read out the declaration.

The document highlights concern for the "damage dealt to the nation" by the Najib administration causing Malaysia to be listed among the 10th most corrupt. 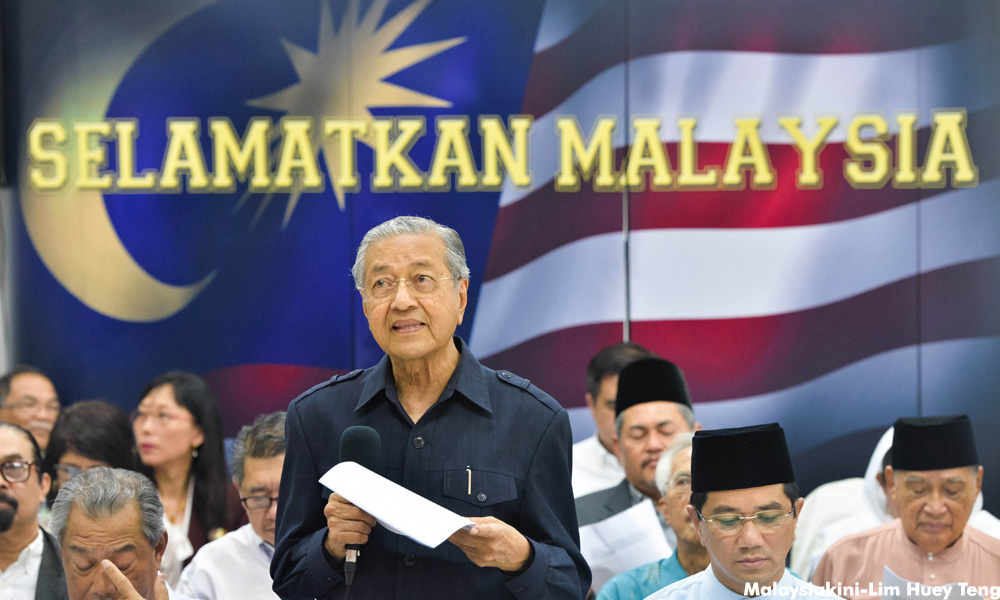 The declaration also includes a lengthy detailed summary of the 1MDB issue.

"We have one hour to go, so please be patient," Mahathir quips, drawing laughter from the crowd.

On Twitter , PKR vice-president Rafizi Ramli, who is also present, complains about the heat as the air-condition is not working.

While Nurul is attending a court case involving NFC, Rafizi Ramli says the party's political bureau decided that Wan Azizah should remain above this matter.

3.37PM: Mahathir says the public are concerned over what's happening in the country and have been complaining to the leaders.

However, till now, he adds, they have been speaking in "different tongues".

Mahathir claims this country is being led by a leader who is doing a lot of damage to the nation. 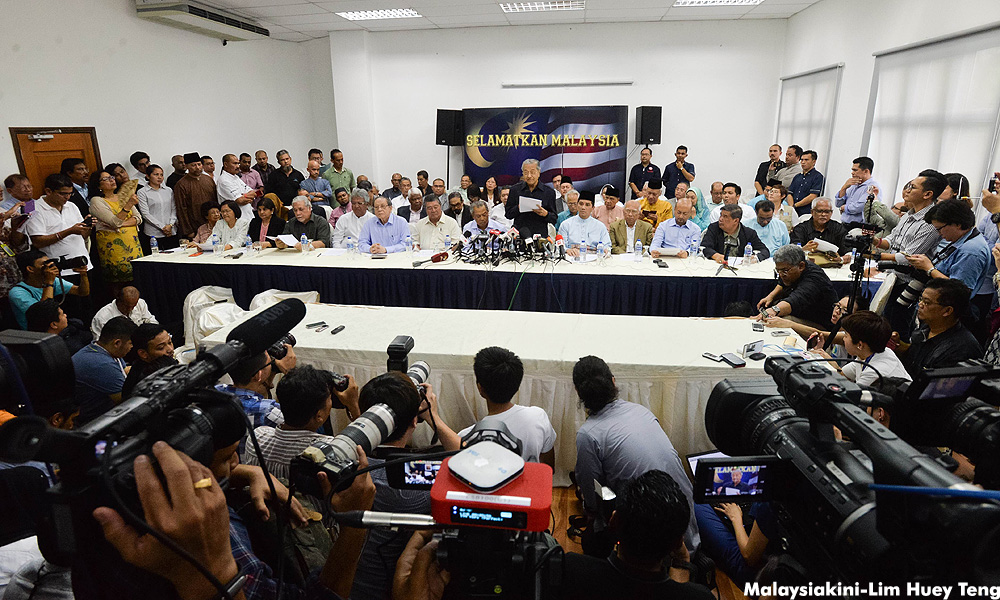 "We must rid ourselves of Najib as prime minister," Mahathir says, drawing applause from some of those present.

He says it is quite clear that irrespective of ideologies and beliefs, all can agree on the need to remove Najib.

He adds a declaration will be inked today, which among others include the removal of Najib, as well as the implementation of reforms after the prime minister is deposed.

3.35PM: Mahathir reads the summary of the declaration, which he terms as the "people's declaration".

"As you can all see, this is a very strange group of people. There is only one thing in common - we are citizens of this country.

"We are not here as representatives of any party, NGO, or group," he says. 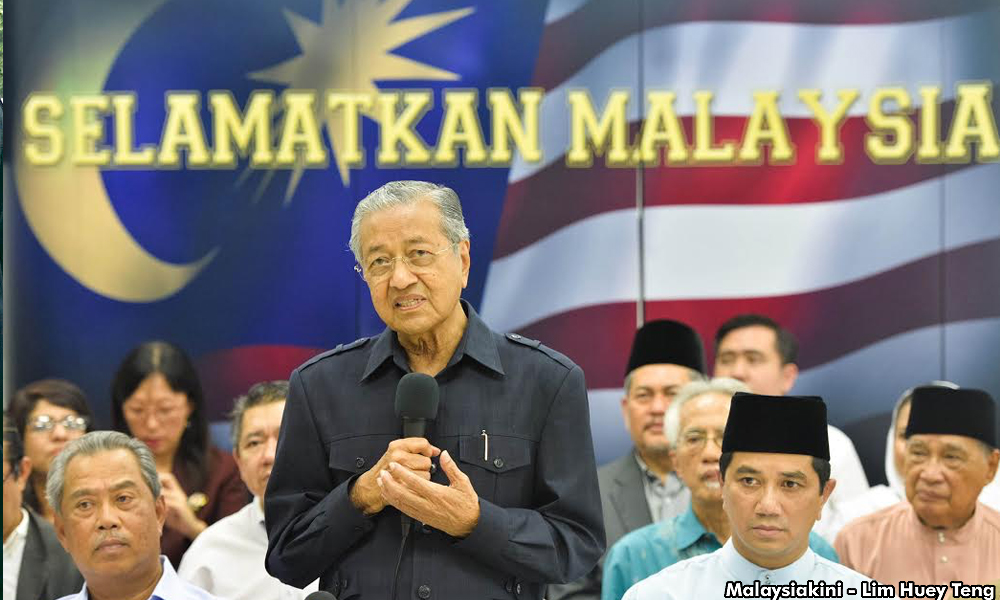 3.20PM: Former premier Dr Mahathir Mohamad arrives at the venue accompanied by his wife Dr Siti Hasmah Ali. The couple is greeted with a round of applause and chants of "Hidup Tun". 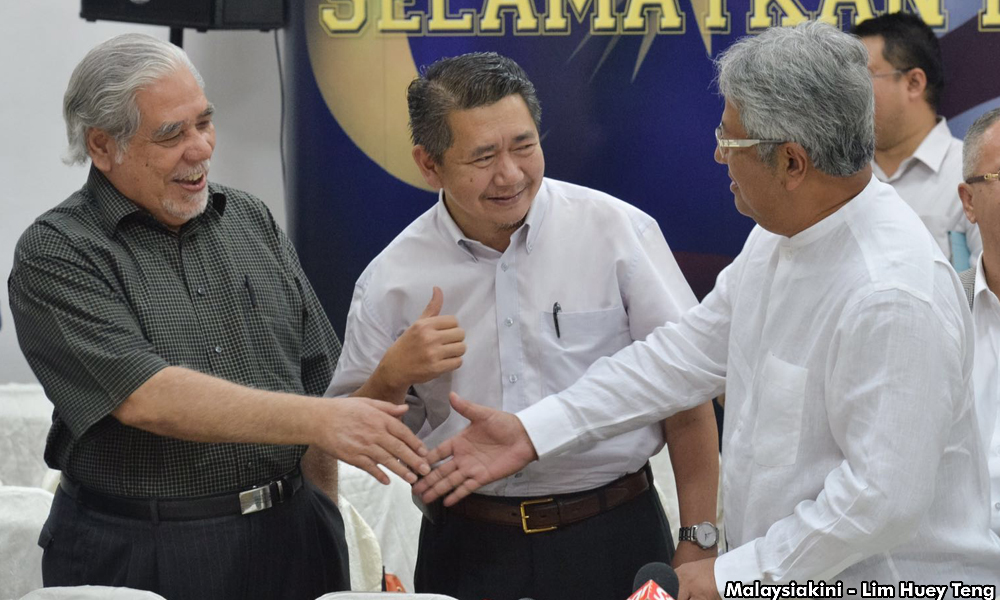 3.10PM: Speaking to Malaysiakini , Mustafa says he is attending in his personal capacity.

"I received an invitation under my name," he says.

Asked if he is concerned about PAS taking action against him, he replies: "That does not arise because I am here following an invitation to attend." 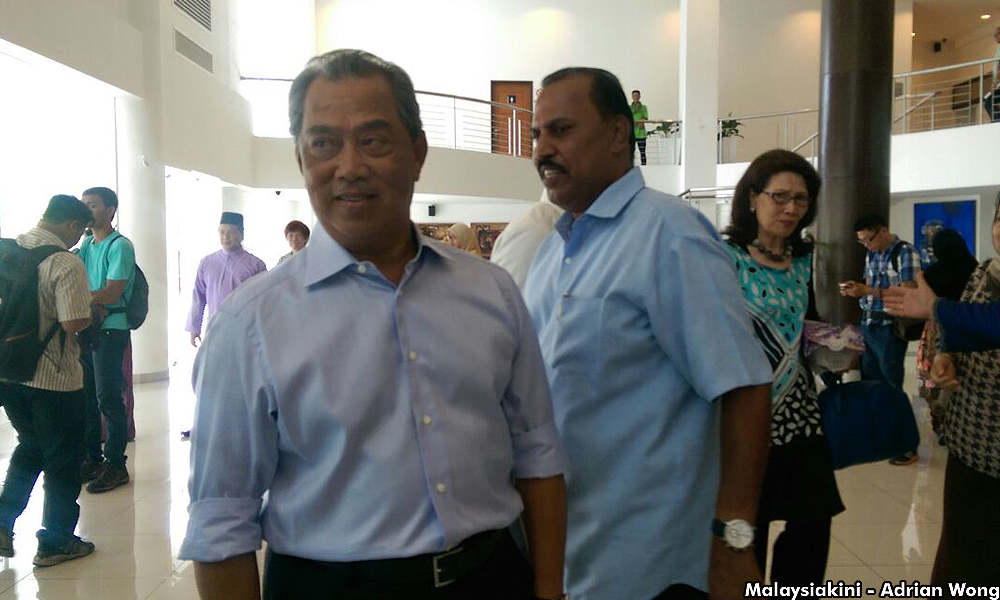 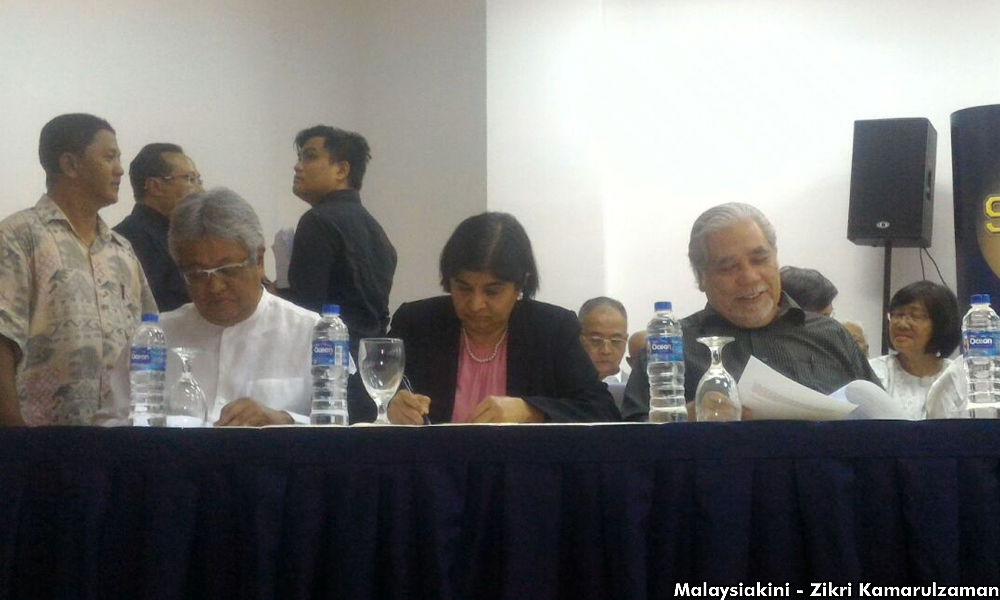 Others there are PKR's Tumpat MP Kamaruddin Jaafar and PAS lawmaker Mahfuz Omar.

In the latest realignment of political forces in Malaysia, former premier Dr Mahathir Mohamad is expected to ink a declaration with opposition figures, who were once critical of him and his leadership.

The declaration is to work together for the removal of Prime Minister Najib Abdul Razak. 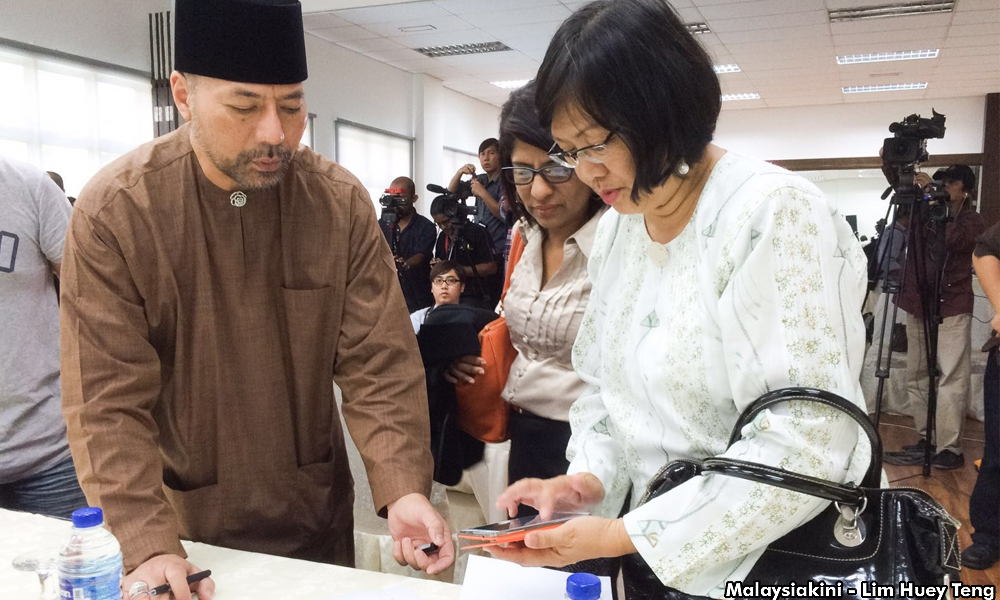 Pakatan Harapan has distanced itself from the declaration, but several of its top leaders are expected to be present, such as DAP’s Lim Kit Siang and PKR’s Mohd Azmin Ali and Rafizi Ramli.

PKR vice-president Nurul Izzah, who is the daughter of Mahathir's arch nemesis Anwar Ibrahim, is also expected to take part in this afternoon’s event at Pusat Alumni UM clubhouse in Kuala Lumpur.

In a statement yesterday, Anwar, who is serving a five-year prison term, also expressed support for the initiative despite his previous accusations of Mahathir having fabricated charges against him.

PAS has refused to endorse the declaration but its Pokok Sena MP Mahfuz Omar is slated to attend.