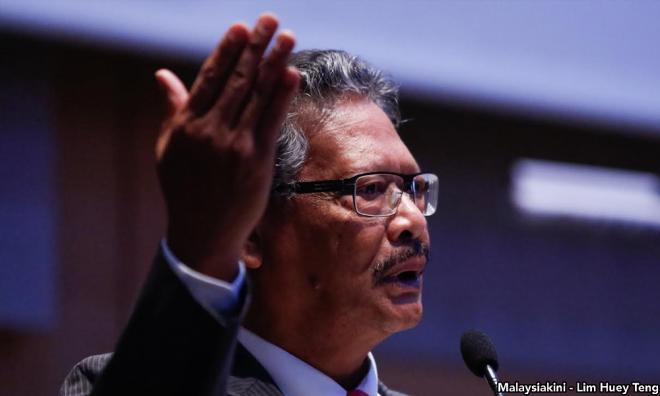 Attorney-general Mohamed Apandi Ali has hit out at the United States Department of Justice (DOJ) for "insinuations" against Prime Minister Najib Abdul Razak in its latest civil forfeiture suit filing this week.

"We would like to express strong concerns at the insinuations that have been made against the prime minister of criminal wrongdoing.

"At no point in the civil claims is the prime minister named as a defendant or has been alleged to have committed any criminal wrongdoing," Apandi said in a statement today.

He maintained that the Malaysian authorities have found no wrongdoing related to 1MDB as alleged in the forfeiture suits.

"We also note that there has been no evidence from any investigation conducted by any law enforcement agency in various jurisdictions that show that money has been misappropriated from 1MDB; and that there have been no criminal charges against any individual for misappropriation of funds from 1MDB.

"1MDB is a Malaysian company and has been the subject of multiple investigations within Malaysia, including by the Malaysian Anti-Corruption Commission (MACC), auditor-general and the bi-partisan Public Accounts Committee (PAC).

"After review, we found that no crime was committed.

"At present, there is still an ongoing investigation conducted by the police concerning 1MDB," Apandi said.

The AG expressed "frustration that yet again the AG's Chambers was not informed or alerted by DOJ of this action".

The DOJ last night announced its most significant milestone, since July 21 last year, when US investigators first went public on the 1MDB scandal and declared that Malaysians had been defrauded on an enormous scale.

In the third and latest filing last night, the DOJ now puts the allegedly misappropriated figure at US$4.5 billion and is seeking to seize US$1.7 billion in assets, purportedly acquired using funds stolen from 1MDB.

Apandi further maintained that his office did not receive any request from DOJ to obtain information or evidence regarding the matter.

“However, we would welcome such a request in line with our commitment to international cooperation and the fight against money laundering.

“As I have promised before, the AG's Chambers will not hesitate to initiate proceedings against the perpetrators of criminal acts provided there is sufficient evidence to do so. Any wrongdoing will be punished and Malaysia will always uphold the rule of law,” he said.

Besides the US, the 1MDB matter has also been subject to investigations in Singapore, Hong Kong, Switzerland, Luxembourg and the United Kingdom.