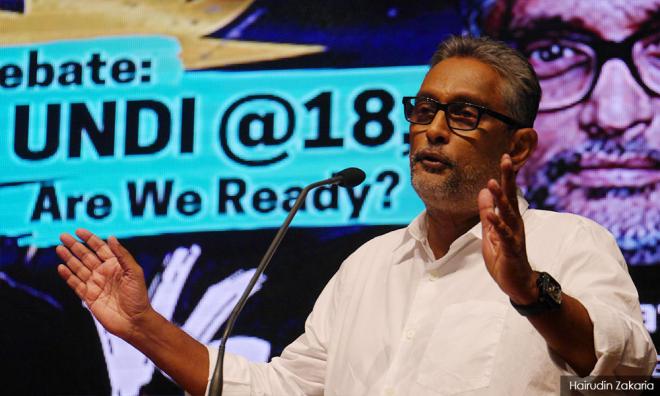 He said this in response to a question on what civil society, the opposition and the wider public can do to prepare the youths to vote at 18, something the cabinet has agreed to.

“Well, I think the first step is, of course, agitating the government. Go to the streets, have more public assemblies, protest.

“This is part of (having) freedom of expression. It is a growing up process,” he said at the “Voting at 18 - Are we ready?” public debate at Universiti Malaya.

As the audience, mostly made up of university students, clapped and cheered at his response, Ragunath further encouraged the use of dissent to pry open space for freedom of expression in the country following the May 9 general elections.

Earlier, Ragunath had questioned his opponent - Youth and Sports Minister Syed Saddiq Syed Abdul Rahman - why two student activists were recently arrested after they staged a sit-in outside the Ministry of Education protesting Education Minister Maszlee Malik’s appointment as president of the International Islamic University Malaysia.

The lawyer also urged for laws restricting students’ freedom of expression, including the Universities and University Colleges Act 1971 (UUCA), to be abolished alongside the move to lower the voting age.

“You can't have a situation where you amend the (voting) age to 18 but you still have the UUCA in place.

“It is very difficult to talk about reducing the voting age in a vacuum without creating an environment for youths to develop, to speak out, to get involved in the politics of this country,” he said.

Syed Saddiq agreed and said that the government will move to repeal draconian laws like the UUCA at the first Parliament sitting of 2019.

He also said that the motion to lower the voting age, which requires a constitutional amendment, will also be tabled in Parliament next year.

The debate was organised by Malaysiakini’s events arm, [email protected], as part of the "Youth for Nation Building" series of public discussions.