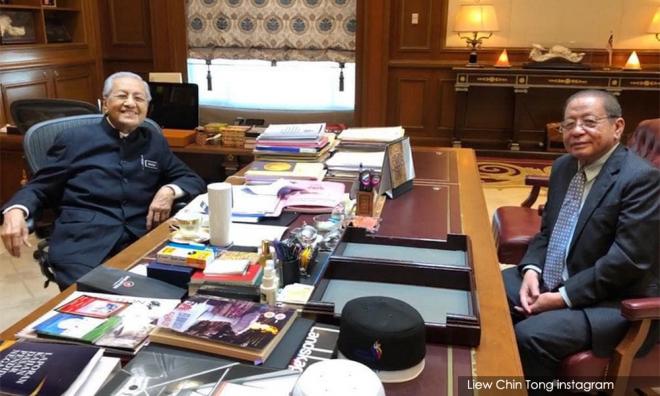 DAP veteran Lim Kit Siang was tightlipped on the details about his meeting with Prime Minister Dr Mahathir Mohamad in Putrajaya this morning.

Contacted by Malaysiakini, the Iskandar Puteri MP said this is his second face-to-face meeting with the prime minister since the last general election.

“We met for about 45 minutes and talked about national issues,” he added, without disclosing details of the discussion.

He said the two veteran leaders, who were once arch adversaries but now allies in Pakatan Harapan, discussed national issues at length.

Lim had, in the past weeks, pressed the government to act on individuals involved in the alleged cover-up of the 1MDB scandal.

He had also called on the government to continue pursuing "sharks" in corruption cases.

The meeting also comes in the wake of a sex scandal, implicating Economic Affairs Minister Azmin Ali, which has rocked the ruling coalition and caused deep fissures within PKR.

PKR Santubong Youth chief Haziq Abdullah Abdul Aziz has confessed to being the other man in the video and alleged that the encounter took place in Azmin's hotel room in Sandakan in May.

Azmin, who is also PKR deputy president, has denied involved and claimed that it is part of a nefarious campaign to ruin his political career.

Commenting on the meeting, former de facto Zaid Ibrahim suggested that Home Minister Muhyiddin Yassin should do the same.

“Kit Siang has gone to see the leader. Perhaps Muhyiddin should do the same. He is president after all. Only they can try to avert another 1998,” he tweeted.

Zaid was referring to when Mahathir, during his first tenure as prime minister, had sacked Anwar as his number two.