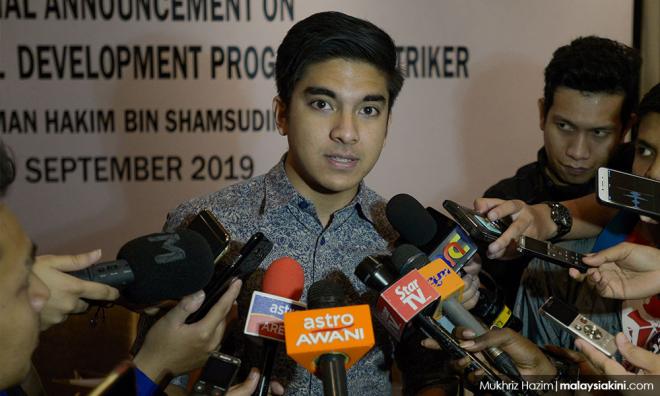 A true, respected Malay speaks up for all M'sians - Saddiq

Specialist Batsman: On Aug 14, Youth and Sports Minister Syed Saddiq Syed Abdul Rahman, who is also the Bersatu Youth chief, went on record to say that "an attack against my Chinese and Indian brothers and sisters is an attack against all Malaysians " in relation to the comments made by the controversial preacher Zakir Naik against the ethnic minorities in this country.

Less than two weeks later, on Aug 24, the boy minister was seen sharing a meal with the Indian fugitive at his home, and urging Malaysians to move on.

I wonder whether I am entitled to get back my financial contribution to the Harapan Fund not long after the general elections last year.

Ipoh PP: Yes, in retrospect, l wish l had never contributed to the fund. The Harapan administration has turned out to be ungrateful to those who supported them.

Not Giving Up On Hope: If Syed Saddiq is really concerned about the non-Muslims rights, then he should not have turned up for the Malay Dignity Congress.

If the congress had been about Malaysian dignity, it would have made sense for him to attend. But he knows that already.

Worse still is that the Malay Dignity Congress was jointly organised by four public universities. What hope is there for young Malaysians? What is the message that Syed Saddiq, who represents all Malaysian youths, is sending out?

He shouldn’t insult the intelligence of the older generation that sacrificed so much for the country by trying to use words that sound right to justify his attendance.

He could have sent a far better message about inclusiveness by staying away last Sunday.

Honma: The events at the Malay Dignity Congress had dissipated all the little dignity that was left in the relations between the races and religions in the country.

It was a sad and shameful day to all Malaysians because after witnessing the congress, foreigners will have a negative impression of our country.

We have always claimed to be a world model of a multiracial nation where races of different ethnic groups and religions live together peacefully.

But after Malay Dignity Congress early this month, all our Malaysian dignity has gone down the drain.

Tidak Harapan: Prime Minister Dr Mahathir Mohamad should have galvanised the Malays to enhance their skills and work ethics so that they can take their rightful place in society instead of focusing on the negative aspects.

He is yesterday's leader and unable to get out of his proclaimed Malayness and rejecting his Indian heritage.

I was shocked to hear at an international press conference when he was asked about his Indian heritage, and he merely retorted that he had only spoonful of Indian blood, and that he is Malay.

As the leader of the nation, he should have said he is Malaysian, just like how DAP secretary-general Lim Guan Eng answered when asked by a reporter about his Chinese ethnicity.

Sixth Generation Immigrant: Action speaks louder than words. At the moment, it is indeed difficult to distinguish Syed Saddiq or any of the other Harapan leaders.

Everyone sounds like Mahathir during his first tenure as prime minister. They only provide cheap and loud statements on race and religious issues with no substantive corrective actions being taken.

Anonymous 1540780680: To gain respect and dignity is not through issuing warning to others or blaming others who are more successful than you, but to make sure your own character is good enough for others to respect you.

If those at the Malay Dignity Congress had discussed how to improve Malay education and financial standings by proposing some workable suggestions, then there is no issue.

However, the speakers at the congress were demanding dignity and respect from other races.

The rakyat fully understood what was going on and now know what to do in the next election.

Those working or holding positions in government or public organisations need to realise their salaries come from all Malaysian taxpayers, regardless of ethnic or race.

They must learn to always be a Malaysian leader first, before acting as a Malay leader to take on Malay issues.

Mano: Syed Saddiq’s comments regarding unity would have been taken seriously if he:

- Voiced out as soon as hearing about the Malay Dignity Congress

- Did not attend the Malay Dignity Congress in Shah Alam

Instead, he chose to play along and is only now coming out to comment about it when it is too late.

Syed Saddiq and his colleagues in Bersatu need to remember that the votes of the non-Malays also contributed to their current position of power in the government.

At the last election, the non-Malays voted for change in order to build a better Malaysia for all, regardless of race or religion.

Cicak Boy: Syed Saddiq’s comments are nothing but damage control. Despite his young age, it seems Saddiq is growing into his political role quite well.

The fact is that the prime minister attended a congress where racist and xenophobic views were openly expressed and no one was admonished or even investigated.

If it was a gathering of Malays to discuss Malay dignity, why the need to drag the non-Malays as the punching-bag as if the latter caused the loss of Malay dignity?

In fact, instead of restoring Malay dignity, some of the speeches and demands by the hardliners had the opposite effect of further tarnishing the Malay ‘maruah’ (dignity).

As for Mahathir, if he had any regard for the voters (non-Malays) that helped put him in power the second time around, he need not have branded them as 'orang asing'/'pendatang' (foreigners/immigrants)

If as Syed Saddiq claims that Mahathir’s speech was solely to advise the Malays to self-reflect and find their inner strength to regain their dignity, there was no reason whatsoever to insult the non-Malays.

Such a need did not arise. This is not the first time. Mahathir is noted for dragging in the non-Malays when he admonishes the Malays.

Fair and Unbiased: Anyone attending the Malay Dignity Congress can be considered as abetting in extreme racism.

It is an outrage to belittle and intimidate the minorities in Malaysia with a threat of "behave or else". These are the true-blue bullies of our country.

My2cen: Just as we will forever remember the now-defunct Utusan Malaysia newspaper for its infamous “Apa Lagi Cina Mahu?” headline, Syed Saddiq will forever be remembered for having dinner with controversial preacher Zakir Naik at his house.

Anonymous 2043581479977820: Syed Saddiq brings a refreshing perspective to the cabinet. There's no doubt he is young but he is learning fast.

Who doesn't make mistakes or misstep in life? The important trait is a willingness to improve and passion to serve.

Loyalty and integrity are fundamental in public service. Let's encourage him rather than just criticise him.

Just a Malaysian: A dignified Malay leader will rally for all races to grow, develop and strengthen Malaysia so that Malays and non-Malays will stand tall on the world stage.

A dignified Malay leader uses the strength of all the Malaysian people to compete globally.

A dignified Malay leader would have long-term vision and set higher goals.

Sadly, we saw nothing of this sort at the Malay Dignity Congress.