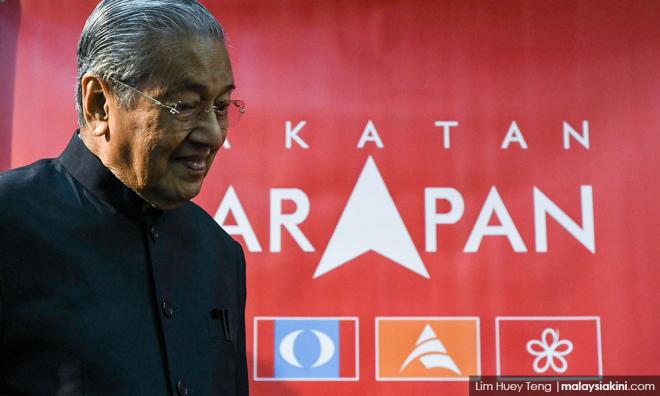 Following Pakatan Harapan's historic win in the last general election, its detractors had hoped the coalition would disintegrate from internal contradictions, according to Lim Kit Siang.

When this did not materialise, the DAP leader said, the conspirators launched an untrammelled campaign of lies, fake news and hate speech to destabilise the nation and incite inter-racial and inter-religious polarisation.

He noted that due to desperation, the siren song is now becoming louder and more brazen.

“Patriotic Malaysians must reject this siren song for it can only end up in Malaysia becoming a failed, rogue and kleptocratic state,” he warned in a statement this evening.

“Failing which, they will have to settle for the Harapan government serving its full term until the 15th general election by 2023.

“Hence, the desperation of the conspirators and the fever pitch of the siren song – the hatching of plots after plots to destabilise the Harapan government,” he added.

Lim then cited the latest alleged plot to form a new federal government without the participation of DAP and Amanah based on the game of political numbers by securing a majority of MPs.

However, he warned that such plots and conspiracies would not achieve Malaysia's aspiration to become a world-class nation.

“But to fulfil the dreams of kleptocrats - which are the nightmares of ordinary Malaysians - either to avoid deserved convictions and sentences for their kleptocracy or to avert being hauled to court for their corruption and abuses of power,” he added.

Yesterday, the Pakatan Harapan secretariat accused former Umno vice-president Hishammuddin Hussein of pushing for a new government sans PAS and Amanah and called on him to desist from such efforts.

Hours earlier, PKR president Anwar Ibrahim, when debating Budget 2020 in the Dewan Rakyat, made veiled references to Hishammuddin's role in the alleged plot.

Urging BN lawmakers not to succumb to threats of prosecution, he said: “This is the problem of wanting to follow the strategy by Sembrong (Hishammuddin's parliamentary constituency) and others. All this is nonsense.”

Earlier today, Hishammuddin described the allegation as ridiculous and baffling.

He also dismissed claims of wanting to prevent Anwar from succeeding Prime Minister Dr Mahathir Mohamad but sidestepped a question on whether he supported this transition of power.

This afternoon, Mahathir, when asked about the alleged plot, said: “They can try”.

He also denied meeting Hishammuddin on this matter.

Harapan claims Hisham pushing for gov't without DAP, Amanah, tells him to stop
15 Oct 2019
Anwar has coffee with Azmin amid rift
15 Oct 2019
Azmin: I'm committed to the cause, won't quit PKR
15 Oct 2019
Why we must defend the Pakatan Harapan government
13 Oct 2019