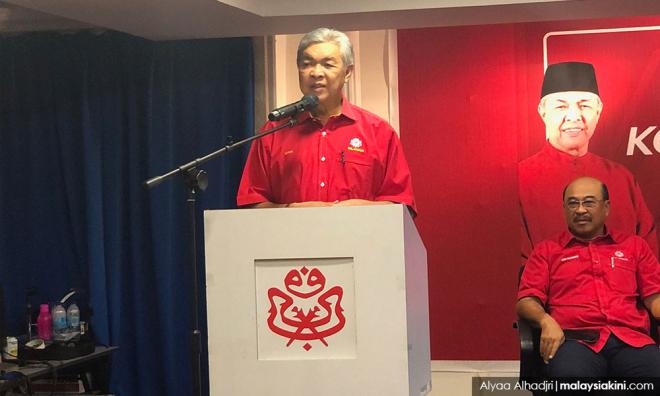 Umno president Ahmad Zahid Hamidi today stood by the party's Sembrong MP Hishammuddin Hussein, amid claims by Pakatan Harapan of the latter's involvement in an alleged plot to push for the formation of a government that will exclude both DAP and Amanah.

Speaking to reporters after launching Selangor Umno's convention in Shah Alam, Zahid also downplayed Harapan's claims of Hishammuddin's alleged attempts to promote the idea that would break up the ruling coalition.

"I think that is just an allegation made against him (Hishammuddin). He is not that kind of person.

"He is sincere in seeing that Umno remains united," said Zahid.

The Pakatan Harapan secretariat had on Tuesday alluded to backdoor negotiations allegedly pursued by Hishammuddin, and urged the Sembrong Umno division chief to cease such efforts.

Their joint statement was issued following PKR president Anwar Ibrahim's veiled references to such an attempt when debating the Budget 2020 speech.

The Umno chief expressed his support for any efforts made in regard to developing such ties by the party's former vice-president.

"I support any (such) efforts by Hishammuddin and we must be together to implement its execution," he said.

Hishammuddin had on Wednesday dismissed Harapan’s claims, pointing out that he no longer had any position of influence within Umno.

He also denied holding clandestine meetings with MPs from Bersatu and PKR to discuss the plot, which is said to be a move to prevent Anwar's rise as the country's eighth prime minister.