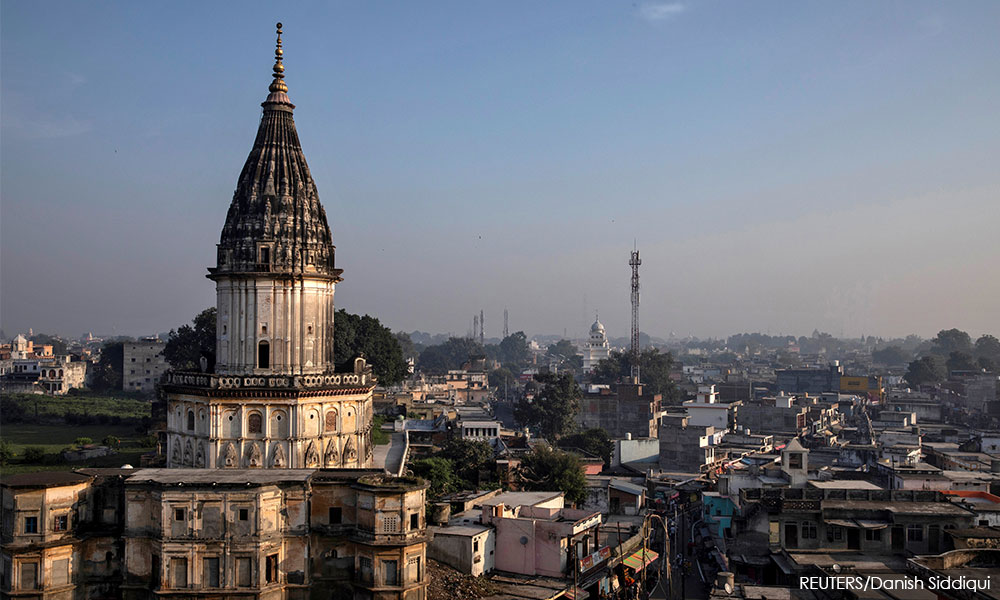 Indian court to rule on Hindu-Muslim dispute over destroyed mosque

India’s Supreme Court is due to rule on Saturday on the ownership of a centuries-old religious site claimed by both Hindus and Muslims, a dispute that has cast a shadow of suspicion over the two communities for decades.

Thousands of paramilitary force members and police have been deployed in the northern town of Ayodhya (above), where an ancient mosque was razed in 1992 by hardline Hindus who believe the site is the birthplace of Lord Rama, a physical incarnation of the Hindu god Vishnu.

The destruction of the mosque triggered religious riots in which about 2,000 people, most of them Muslims, were killed across the country and led to a series of court battles with various groups staking claim to the site.

A final verdict will be delivered by a five-judge bench headed by the Chief Justice Ranjan Gogoi, the court said late on Friday.

The verdict will decide the ownership of a plot of land of just 2.77 acres (1.1 hectares) that has been heavily protected since the 1992 clashes.

Prime Minister Narendra Modi’s Hindu nationalist party has long campaigned on a promise to support the construction of a Hindu temple (above) on the site of the razed mosque.

“It may seem to be just a piece of land, but for us it is a pious place where our god was born,” said a senior Hindu leader affiliated with Prime Minister Narendra Modi’s party.

“We hope the court rules in favor of the Hindus,” said the leader, who declined to be identified due to the sensitivity of the issue.

Whichever way it goes, the court decision is likely to have a significant impact on fraught relations between India’s Hindus and Muslims, who constitute 14 percent of its 1.3 billion people.

The government has stepped up security not just in Ayodhya, but in other communally sensitive areas and rapid action forces have been put on a high alert.

For more than seven decades, right-wing Hindu campaigners have been pushing to build a temple on the site, which they believe was holy for Hindus, long before the Muslim Mughals, India’s most prominent Islamic rulers, built what they called the Babri mosque there.

A verdict in favour of building a Rama Temple at Ayodhya would be seen as a political victory for Modi, who won a second term in a landslide general election win this year.

The Rashtriya Swayamsevak Sangh - parent organization of Modi’s party - has decided against celebratory processions if the verdict goes in favour of the Hindus, to avoid provoking sectarian violence.

Muslim organizations have appealed for calm to prevent communal flare-ups.

world
india
ayodhya
narendra modi
Related Reports
Saifuddin: Malaysia is sticking to its decision to let Zakir Naik remain
a year ago
Children imprisoned in India’s attempt to control tempers in Kashmir
a year ago
RCEP - World's biggest trade pact shapes up without India
a year ago
Asia trade pact doesn't reflect India's interests, decided not to join: PM Modi
a year ago