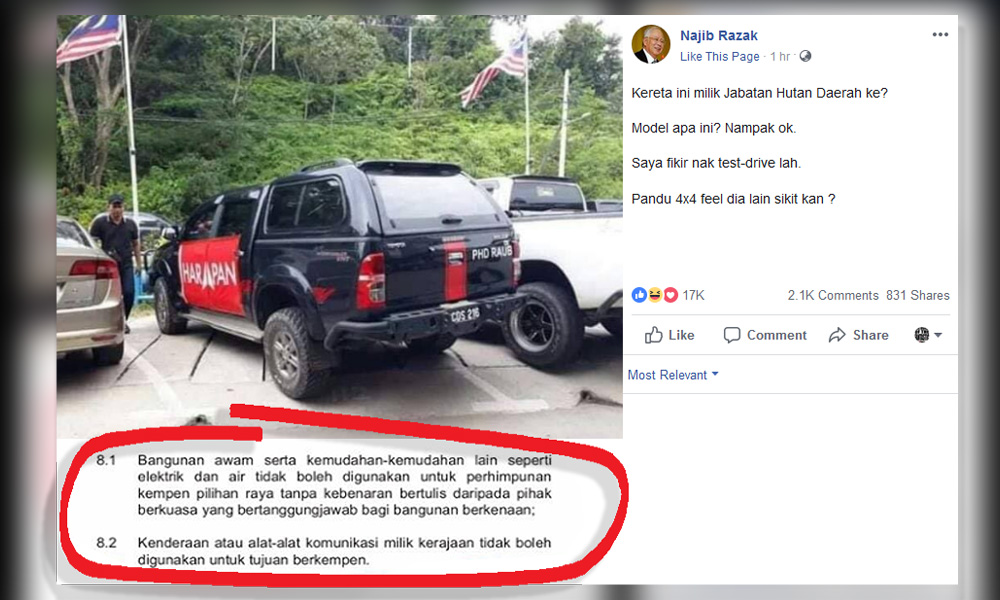 The Pahang government confirmed that a four-wheel drive vehicle allegedly used for Pakatan Harapan's by-election campaign in Cameron Highlands belongs to the state Forestry Department and demanded its return.

Mohamad's press secretary Amin Shah Iskandar said the minister will be initiating legal action against Khairy for the claim as the Defence Ministry had already explained his usage of an Armed Forces helicopter was not for the election.

A Terengganu assemblyperson was arrested by the MACC for allegedly making RM500,000 in false claims.

Economic Affairs Minister Azmin Ali pledged to help the Felda community regardless of how they vote in the Cameron Highlands by-election.

Redzuawan Ismail, popularly known as Chef Wan, was upset at Najib Abdul Razak's visit to his home village in Cameron Highlands and said he wanted to slap the former prime minister for claiming that Felda saw its golden age under BN despite widespread corruption.

Najib refused to respond, asking why he should entertain Chef Wan.

Asyraf doubles down on dancing controversy

Umno Youth chief Asyraf Wajdi Dusuki claimed that Chief Justice Richard Malanjum dancing with the legal fraternity gave the perception that they were in a special position to influence him.

The Advocates Association of Sarawak (AAS) hit out what it described as the politicisation of the dance at a gala event hosted for the legal fraternity, adding that critics do not understand East Malaysia.

The Kelantan government said it is prepared to fight Putrajaya which has filed a suit on the matter.

PAS Youth was unfazed by DAP's police report for calling the latter anti-Islam and reiterated its claim.

A man who claimed he is the "Sultan of Malaysia" was released on police bail.

A Malaysian who was attacked in a suspected racial attack in New York passed away.

The Hindu community will be celebrating Thaipusam at Batu Caves.