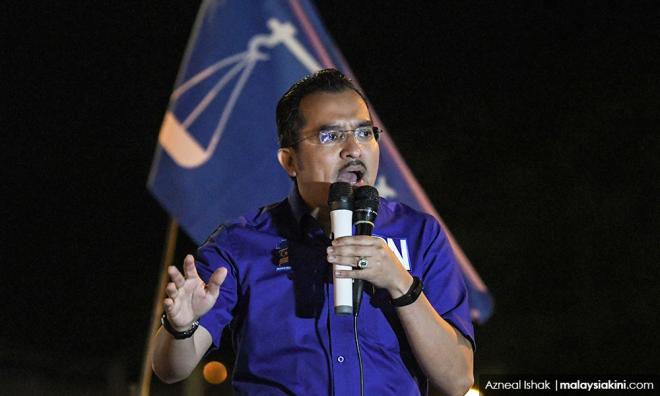 Umno Youth chief Asyraf Wajdi Dusuki told attorney-general Tommy Thomas and chief justice Richard Malanjum to explain their dance onstage together, as it paints the judiciary in a bad light.

PAS president Abdul Hadi Awang earlier said that resignations would have been tendered if top legal officials in the West were seen doing the same.

Earlier, Hadi said he could not recall ever being nominated for the prime minister's post prior to the 13th general election.

Meanwhile, a group of MCA activists were embroiled in a confrontation in Cameron Highlands after attempting to approach Lim regarding the abolition of the death penalty.

Najib croons about his innocence

Ahead of his SRC International trial, former prime minister Najib Abdul Razak got behind the microphone to sing about his alleged persecution by the Pakatan Harapan government to the tune of 1970s hit “Hati Ku Luka Lagi.”

In Cameron Highlands, Najib poked fun at Harapan over its apparent failure to deliver on several of its election promises nine months after the coalition's historic polls win.

Altantuya Shaariibuu's cousin Burmaa Oyunchimeg testified that she saw a photograph of the slain Mongolian national in Paris together with her then-lover Abdul Razak Baginda and a deputy prime minister named 'Razak'.

She also said that the purpose of Altantuya's final visit to Malaysia was to seek money from Razak Baginda for unpaid work.

Najib Abdul Razak, who is presumed to be the former deputy prime minister referred to by Burmaa, said that her claims were lies, and reiterated that he had never met Altantuya.

Kelantan Deputy Menteri Besar Mohd Amar Nik Abdullah said the lack of incoming petroleum royalties is among the reasons why the state has to resort to logging.

Khadem al-Qubaisi – who allegedly played a key role in the misappropriation of 1MDB funds – claimed that he is being made a scapegoat in the scandal and that Abu Dhabi is forcing him to turn over his personal assets.

Three ministers said they are in the dark about the alleged termination of the China Communications and Construction Company (CCCC) as the contractor for the East Coast Rail Link (ECRL) project.

Proceedings for the civil suit filed by Altantuya's family over her death continues at the Shah Alam High Court.

French imports could be curbed if palm oil use restricted
23 Jan 2019
Both BN and PAS agreed on Cameron candidate, Khalil says
23 Jan 2019
In last mile of Cameron race, candidates go all out to please voters
23 Jan 2019
Over 100 laws set for amendment or repeal, says law minister
23 Jan 2019