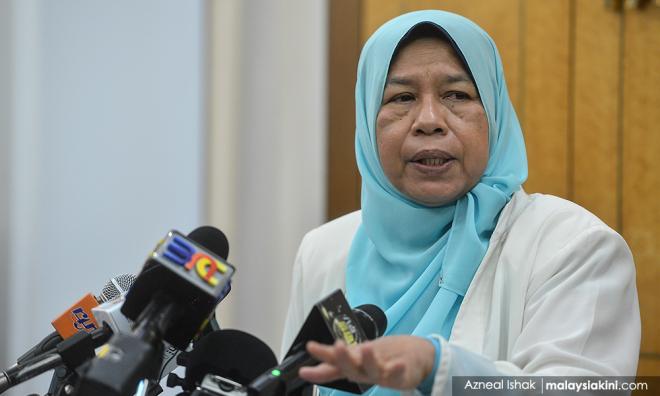 PKR vice-president Zuraida Kamaruddin has defended the federal minister implicated in a sex clip, describing the allegation as slander.

She also claimed the person who made the accusation, Santubong PKR Youth leader Haziq Abdullah Aziz, has a dubious background.

Zuraida alleged that Haziq, who is also the senior private secretary to Primary Industries Deputy Minister Shamsul Iskandar Mohd Akin, is known to be close to the opposition.

"I wish to state my undivided confidence in the credibility, integrity and personality of the leader who is being slandered," she added in a media statement this afternoon.

Zuraida, who is also the housing and local government minister, urged the authorities to investigate and bring the perpetrators responsible for the slander to justice.

"Any political conspiracy involving character assassination such as this should be stopped immediately,” she added.

Zuraida also expressed sadness and regret over such actions which could jeopardise the government's efforts to recover the nation's economy.

Meanwhile, PKR secretary-general Saifuddin Nasution Ismail said PKR was against "dirty politics" which do not benefit the country.

"PKR, which is a component of Pakatan Harapan, will continue to focus on helping the federal government formulate policies and programmes for the people," he said in a separate statement.

He urged the public to stop circulating the video.

Nurul Izzah: It's a sad day for Malaysia

“It's a sad day for Malaysia as the sordidness of gutter politics rears its ugly head again.

“We certainly deserve better than the ongoing media coverage and frenzy the vile allegations have gained,” she added in a statement.

According to the Permatang Pauh MP, this has no other objective than to spell an end to the career, reputation and character of leaders.

“My sympathies are with them and family. We must never underestimate nor lose sight of the personal human cost to everyone concerned as a consequence of slander.

“We must all unite in condemning such vileness and disassociate ourselves from propagating such filth.

“Let’s focus instead on issues and things that matter. On making Malaysia better. This vile toxicity isn't part of our political culture. It must never be,” she added.

Early this morning, Haziq claimed that he was the one in the viral clip, which depicted a man engaging with sexual acts with an individual resembling the minister.

He also claimed the minister, a PKR leader, was in the clip and that the incident took place on May 11 in Sabah.

"To those who did it, may they rot in hell," he said in a statement.