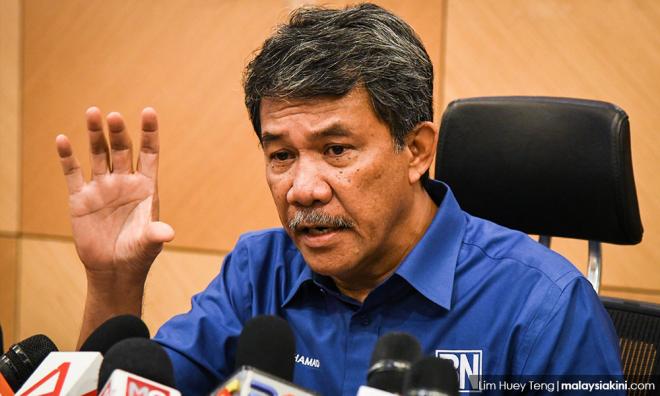 Umno acting president Mohamad Hasan has called on his party not to get involved in a sex video scandal involving a man said to resemble a minister.

"I urge and invite all leaders, members, and supporters of Umno not to get involved, what more take advantage and do things that will only make matters worse.

"Umno will not get involved in matters that tarnishes someone, and will not be a party or social movement that condones such actions," Mohamad said in a Facebook posting.

He called for prayer so that the matter can be resolved amicably.

His remarks came following the circulation of several video clips targeting a Pakatan Harapan minister in bed with another man.

Malaysiakini reported yesterday that the videos were shared with reporters and several politicians, all of whom were added to mysterious WhatsApp groups in the wee hours of the morning.

"Seriously, we are already a nation traumatised by slanders of the past. Do we really want to expose another generation to despicable allegations, with the sole intent of destroying someone’s character?

"If you come across sordid news today involving our politics, look away. Vile filth thrives when it’s given attention,” he posted in an Instagram Story, which is only available for 24 hours.

Khairy had previously been sued by PKR president Anwar Ibrahim for defamation after alleging the latter "main belakang" (play from behind).

He had also organised a roadshow with lawyer Muhammad Shafee Abdullah, during which the latter made lewd remarks in regard to Anwar's sodomy case.

In a related development, Haziq Abdullah Abdul Aziz (photo), the senior private secretary to Deputy Primary Industries Minister Shamsul Iskandar Mohd Akin, claimed to have been the other man in the video.

Haziq posted a video online this morning, in which he further alleged his partner was indeed a minister, and called on the authorities to investigate the latter for corruption.

He also claimed that the act took place in Sabah on the polling day of the Sandakan by-election.

"As Muslims, we must be consistent with what Islamic law (based on Islamic teachings) state, that we should not make accusations (qazaf) unless we have witnessed it," he said on Facebook.

"At a moment where the people are grappling with all sorts of economic and social struggles, PAS must emerge as the agent to help, and not spend its time and energy on non-beneficial things."

This echoed a call from Umno Youth chief Asyraf Wajdi Dusuki yesterday, who cautioned that circulating the videos was against the teachings of the faith – particularly if the video clip turns out to be fake.

This was also reiterated by Angkatan Belia Islam Malaysia in a separate statement this morning.

Other opposition parties also chimed in on the scandal. MCA Youth chief Nicole Wong called for respect, saying every party must handle the crisis maturely, instead of resorting to "low blows."

She called on Malaysians to cease sharing the video and to give space to authorities to investigate the matter.

Gerakan president Dominic Lau, meanwhile, derided the use of sex videos as a political gambit.

"The competition between the ruling coalition and opposition should be based on policies, ideologies and performance, not sex videos to kill off opponents politically.

"Are sex scandals or secretly filmed videos the only way we can pull down political opponents?” he said a statement today.

Stressing that he does not wish to “hit a person when he is down," Lau said he has instructed Gerakan Youth to lodge a report over the video so police may catch the culprit who made the recording in secret.

Yesterday, Umno supreme council Lokman Noor Adam had said he was lodging a report with the MACC and police to probe the matter.